KZN water pipeline project to be completed by mid-2017 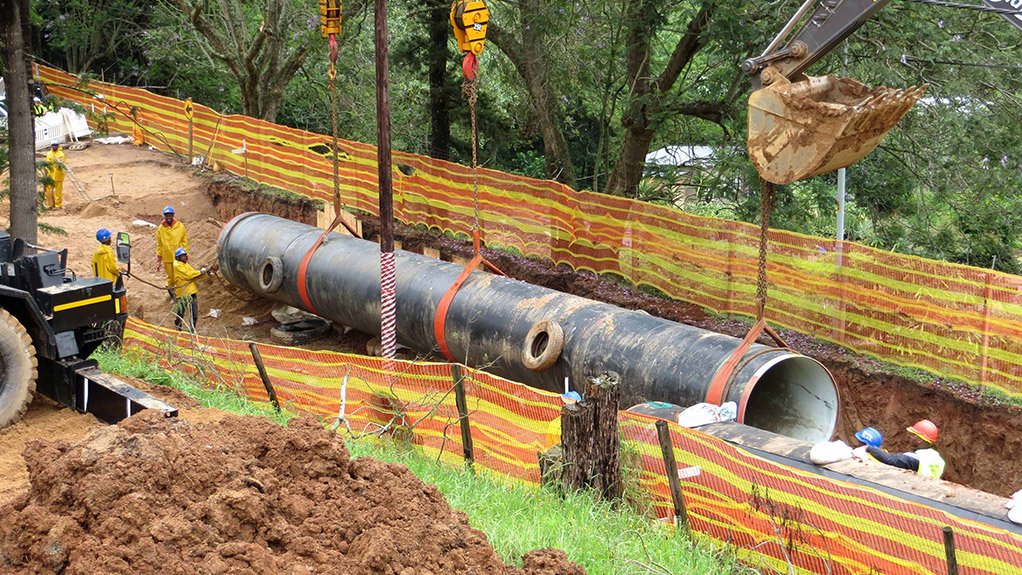 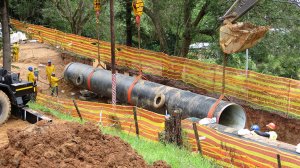 Phase 1 of the project, which spans 20 km from the Umlaas road reservoir to Inchanga station, was commissioned at the end of 2012.

Msweli tells Engineering News that completing Phase 2, which is intended to replace and augment existing infrastructure that transports water into Durban from the Midmar dam and the recently constructed Spring Grove dam, will ensure that the eThekwini region has some of the best bulk-water infrastructure in the region.

He explains that the existing infrastructure cannot cope with development in the west of eThekwini and that the augmentation will allow for more volume to be made available where required.

Intended to significantly strengthen the capacity of bulk-water supply, the Western Aqueduct will meet the needs of the greater eThekwini region for the next 30 years.

The capital cost of the project is estimated at R1.8-billion and has been funded through municipal infrastructure grants and loans taken up by eThekwini local authority.

“The overall contract was divided into several smaller contracts, each of which went out to tender. It was a client requirement to have the contracts unbundled to suit budget constraints,” comments Msweli.

Bright indicates that the Western Aqueduct pipeline which links to Bothas Hill reservoir will be complete by the end of this year, ensuring that Botha’s Hill and Kearsney College will have a sustainable bulk-water supply system.

“The Ashley drive break pressure tank allows for the water to flow in the reservoir outlet pipeline, but at a reduced pressure,” he explains.

Esor Construction has also laid 1.8 km of the 7-km-long Tshelimnyama pipeline. This branch line, running along Haygarth road and under the N3 to the water reservoirs in Tshelimnyama, will alleviate water shortages in the area and is scheduled for completion during the last quarter of 2016.

The final main component of the Western Aqueduct is the 10 Mℓ Wyebank break pressure tank, the construction of which will begin in the first quarter of 2016.

Meanwhile, Msweli thanks eThekwini residents for their patience during construction and points out that motorists will notice not only that roadworks, completed in June, are now up to date but also that all roads excavated to lay the pipe, have been rebuilt on the section of pipeline from Inchanga station to Ashley drive in Hillcrest.

He adds that all roadworks on sections of the pipeline that are still under construction will be closed and made safe over the festive season. Only Pioneer and Wyebank roads will continue to operate using a stop/go traffic management system during the upcoming festive season.

Further, while awaiting the completed construction of the section of pipeline along Church street, the temporary railway crossing near Stokers Arms, in Kloof, will be operational until the start of the builders break (in December) and, thereafter, from mid-January. The design and construction monitoring for the Western Aqueduct project is being executed by a joint venture comprising consulting engineering firms Knight Piésold, Naidu Consulting and Royal HaskoningDHV.

Meanwhile, Bright notes that extensive environmental rehabilitation has been undertaken along all sections of the completed pipeline. He adds, however, that vegetation has not been growing as well as expected, owing to poor summer rains.

“In order to ensure acceptable rehabilitation, environmental specialists, appointed by contractors, will rescue endangered rare species of indigenous plants and will keep them in nurseries for replanting. “Alternatively, and in conjunction with the rescue and salvaging of [these] rare [species], the seed of necessary plants and/or whole plants are planted and maintained over a period to ensure that the areas disturbed are revegetated,” concludes Msweli.