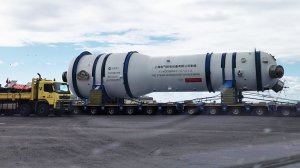 The steam generator replacement project, which is central to Eskom’s R20-billion programme to extend the 40-year design life of the Koeberg nuclear power station by a further 20 years, marked a major milestone this week with the arrival of the first units in Cape Town.

The project, which was sanctioned by the Eskom board in 2010 and approved by the National Nuclear Regulator, involves the replacement of all six steam generators at Koeberg’s two units.

The first three steam generators are scheduled to be installed at Unit 1 between February and June 2021.

The replacement of steam generators at Unit 2, which is currently undergoing a refuelling outage until mid-October, has been planned to coincide with the unit’s next maintenance and refuelling outage between January and May 2022.

The existing steam generators have been in operation since Koeberg’s first unit was connected to the national electricity grid in 1984.

Eskom awarded the R4.3-billion Koeberg contract to Areva in September 2014, but Westinghouse Electric Company, which also bid, objected and launched an expedited review application in the South Gauteng High Court.

The High Court found in favour of the State-owned utility, but following an appeal, the Supreme Court of Appeal (SCA) ruled that Eskom’s tender committee had acted unlawfully by taking account of considerations not included as adjudication criteria in the original tender.

The SCA did not, however, interdict the contract from proceeding and instead referred the tender back to Eskom for reconsideration.

Eskom approached the Constitutional Court in January 2016 in a bid to have the SCA ruling overturned and in December of that year the highest court in the land found in the utility’s favour.

Each steam generator is 20 m in length and weighs about 380 t and the first units were transported the 40-km distance from the Cape Town Harbour to Koeberg using abnormal-load vehicles.

At 42 m in length, the trailer used to transport the first steam generator was the longest in South Africa and was hauled using four trucks. The journey time for each load is about eight hours.

Eskom says that, once removed, the current steam generators will be stored on the Koeberg site, where they will be packaged and dismantled for final disposal at a national nuclear waste repository.

The repository site was not identified, but the utility noted that final disposal was the responsibility of the National Radioactive Waste Disposal Institute.

Eskom says that the replacement of steam generators is the most intensive and expensive project that a nuclear power station can undertake, but notes that several stations internationally have already done so successfully.