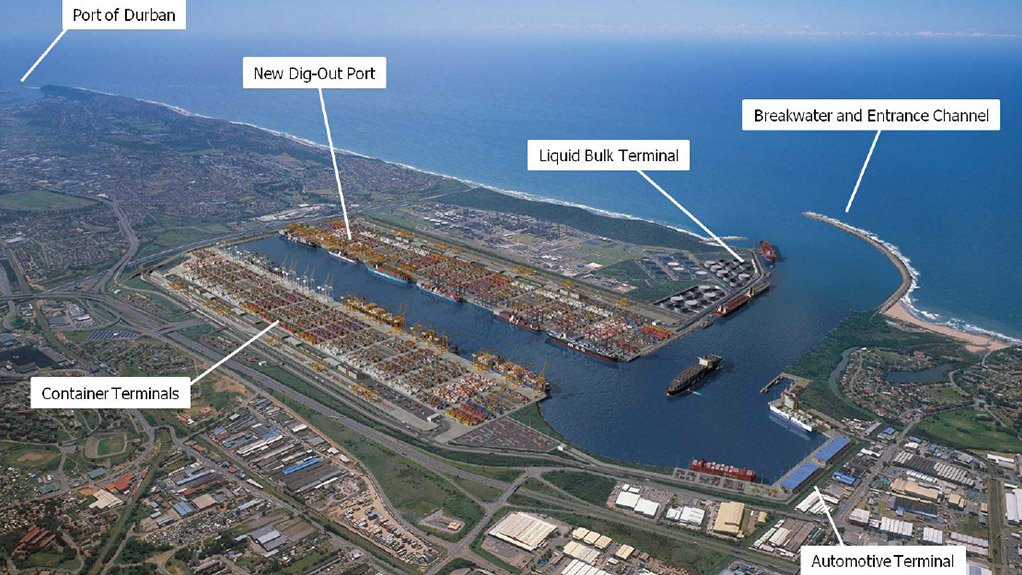 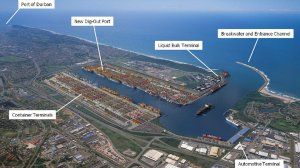 An artist impression of the proposed Durban Dig-out Port

Freight logistics group Transnet, which is studying the development of a proposed dig-out port on the old Durban International Airport site, aims to finalise an engineering solution for the relocation of the single buoy mooring (SBM) oil loading facility by early next year, having identified its repositioning as critical to meeting the project’s overall timeline.

Under the current schedule it is envisaged that the Durban Dig-out Port (DDOP), which could be developed in several phases at an anticipated cost of more than R100-billion, would begin receiving vessels from 2020.

The initiative is being marketed as a public–private partnership (PPP) opportunity and, should it proceed, could become Africa's largest deep-water container terminal, capable of handling 9.6-million twenty-foot-equivalent units (TEUs) through 16 berths by 2037.

However, executive manager for planning support Noel Cronje has told delegates to a South African Petroleum Industry Association conference that the current SBM terminal is located precisely where the DDOP’s breakwater will be developed and its relocation is, thus, unavoidable. “If we don’t move the SBM, we can’t build the port.”

Various alternative sites are under review together with potential new pipeline routes, with undisrupted liquid-fuel supply having been identified as a project imperative. “The SBM is a very critical piece of infrastructure not just for Transnet and not just for Sapref and other oil refineries, but for the whole country, because the vast majority of crude oil that’s imported into South Africa comes ashore via the SBM,” Cronje explains.

It is, therefore, unlikely that the existing SBM can simply be relocated, as the reliability in the new facility will have to be proved before the existing SBM can be decommissioned. “That places us under some time pressure, which is why we need to identify a new site and establish a new import route as soon as possible,” Cronje says, adding that initial studies have shown up both positives and negatives for the various alternatives.

Practitioners are in the process of being appointed to oversee the environmental impact assessment (EIA) associated with the SBM project, with Transnet hoping for a favourable record of decision by the end of 2014. The process will be run in parallel to the EIA being conducted for the entire DDOP, which has already run into some opposition from environmental and community groups.

The project is currently in the prefeasibility-study phase, with the SBM relocation having been incorporated as an “early deliverable” within a study that should be concluded by mid-2014.

Transnet aims to finalise the PPP financing model by the end of 2014 and has already started canvassing support for the project abroad, with investor road shows to Europe and Asia.

The port would also need to be promulgated, which could entail the introduction of new legislation, while properties, other than that which has already been purchased from the Airports Company South Africa, will also have to be acquired to enable the construction of the harbour channel.

Transnet currently anticipates that all these processes, including the relocation of the SBM, should be completed before the end of 2016, so that construction can proceed to enable the DDOP to receive first cargo in 2020.