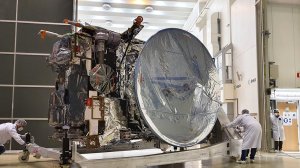 Photo by ESA
Juice, in its transport framework, after its arrival at Estec

The European Space Agency (ESA) announced on Thursday that its latest space probe, the Jupiter Icy Moons Explorer (Juice), had been delivered to ESA’s European Space Research and Technology Centre (Estec) in the Netherlands. The spacecraft had been transferred from the Friedrichshafen facility of its prime contractor, Airbus Defence and Space.

The delivery to ESA (which is not an agency of the European Union) actually took place last week, but was only disclosed on Thursday. Juice is currently being unpacked and prepared for testing in Estec’s Large Space Simulator. This is the largest thermal vacuum chamber in Europe.

Inside the Large Space Simulator, the space probe will be subjected to several weeks of extreme heating and cooling cycles. These tests are to ensure that it is ready for its long voyage to Jupiter. This test programme is scheduled to conclude in July.

Following the end of its Estec test programme, Juice will be transferred to Toulouse, in France, for its final series of tests. After these are concluded, it will be transported to the Kourou Spaceport, in French Guiana, in South America. There it will be integrated on to an Ariane 5 rocket and launched next year.

Juice’s voyage to Jupiter will last seven years, with the space probe arriving at its target in 2029. Once in orbit around the giant planet, it will spend at least three years studying its three big icy moons – Callisto, Europa and Ganymede – as well as Jupiter itself.

To this end, it is equipped with a suite of experiments, including geophysical and remote sensing instruments. “The mission will investigate the emergence of habitable worlds around gas giants and the Jupiter system as an archetype for the numerous giant exoplanets, now known to orbit other stars,” said ESA in its press release.