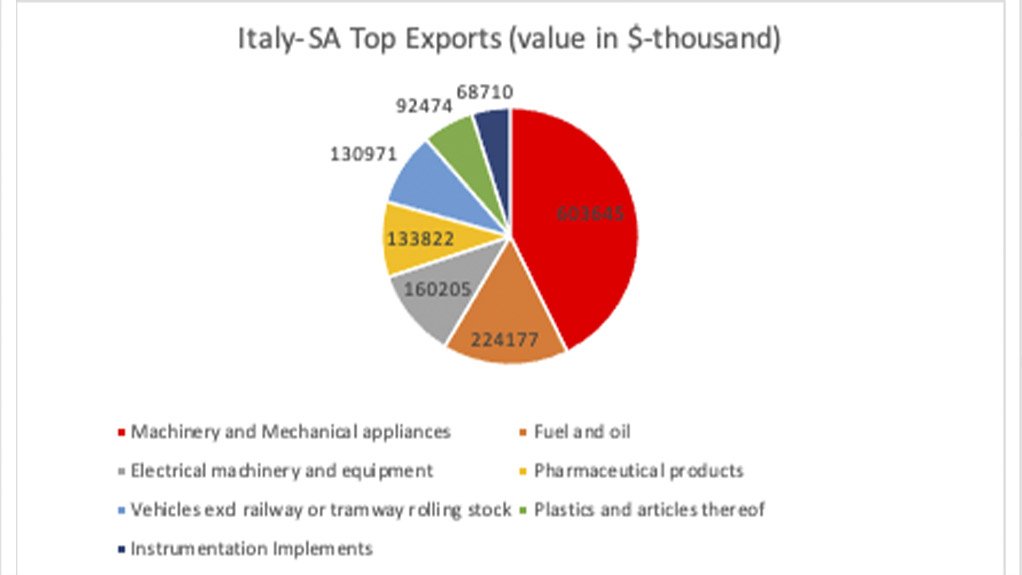 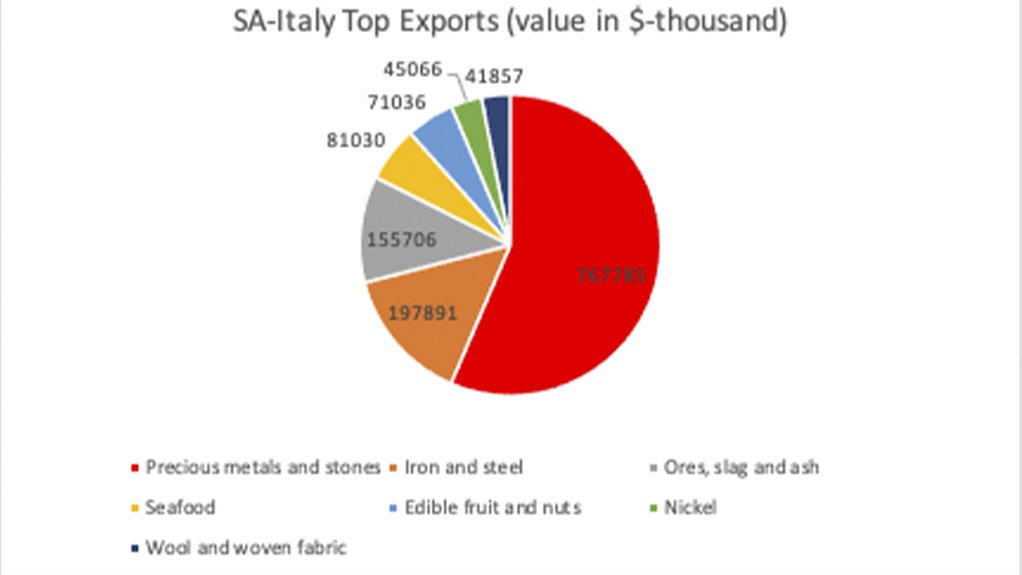 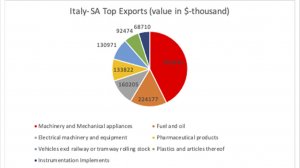 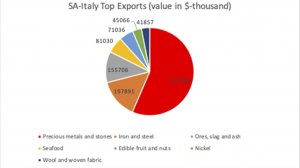 During 2019, Italy-South Africa trade retained a healthy level despite South Africa’s gross domestic product (GDP) only growing by 0,8% during 2019. Italian imports into South Africa reached a total of more than $2.2 billion and goods flowing from South Africa to Italy were valued at $1.6 billion.

Italian commodities such as petroleum –excluding crude oil– have had an increased import rate of 63% per annum and synthetic rubber at 130% between 2015 and 2019. This increase demonstrates potential growth for both markets in South Africa. Meanwhile, the export of maize to Italy has grown by 920% over the last five years and stood at $11-million for 2019, while sugar has grown by 826% in the same period with product to the value of $10-million currently going to Italy. Finally, the pharmaceuticals market in Africa is expected to be worth $45 billion next year. Several new growth sub-sectors exist, including that of  medical cannabis (CBD) estimated at a global value of $7.2-billion and South Africa’s share of the market estimated to be about $2.5-billion a year, with WHO estimating that South Africa will be the third largest producer of CBD.

There are almost certainly more products with a potential for rapid market entry into the South African and Italian markets respectively. The Chamber believes there are several underexplored synergies and specializations within the two nations and encourages exploration and experimentation by businesses to  further deepen the trade ties between the two economies.

The mature trade relations between the two countries (Italy and South Africa) is promoted and facilitated by a system of government structures and private institutions. The Italian-South African Chamber of Trade and Industries amongst other international bodies such as the Italian Embassy in South Africa, the Italian Trade Commission in South Africa, the South African Embassy in Italy and several logistics companies, serve as components of maintaining bilateral trade between Italy and South Africa. The Europe-Southern Africa CEO Dialogue which was hosted in Johannesburg by The European House-Ambrosetti, in partnership with the Gauteng Government, forms another node of the lively bilateral trade relations between the two countries.

The Chamber is a crucial provider of services that assist bilateral trade between Italian and South African companies by both helping Italian companies to set themselves up in the South African market and assisting South African companies with finding Italian partners. The Chamber provides services for market research, conducting feasibility studies and insight into the South African economy and the local Italian business community. We give clients rapid market orientation services by conducting scouting, arranging logistics, organizing B2B meetings with quality contacts from the Chamber’s expansive database and even providing office space to start-up companies lacking capital to rent offices. These services provide a much more direct avenue for doing business and are accompanied by a significant cost reduction compared to those that a company would incur if it attempted to take on these tasks itself. Added to these benefits is the permanent presence in South Africa that the Chamber has and its ability to represent its members in all necessary instances.

South Africa and Italy have concluded a number of important agreements over recent years. These include agreements in the areas of science and technology, water management and defence cooperation. A number of new agreements are being considered.and a number of major Italian companies have invested in South Africa such as Italian private renewable energy firm Enel Green Power  which operates widely across Africa andhas funded projects in South Africa –among other nations–.

With just over 66,000 Italian tourists visiting South Africa every year, the Chamber has also identified tourism as a major sector for long term growth, following the creative destruction currently underway in the sector. Especially given the disruption and imminent restructuring of tourism around the world, new innovations are likely to have strong growth potential once the coronavirus has been tackled. In spite of all the difficulties presented to the globalized economy in the last year, there are bound to be several silver linings which are attached to the gloomy short-term outlook. ItalCham looks forward to helping members with identifying the most promising opportunities and assisting more Italian companies with internationalisation and market entry into South Africa.

This Article was initially published in the Italian South African Chamber of Trade and Industries’ Annual Directory. Click here to see the full version of the publication.