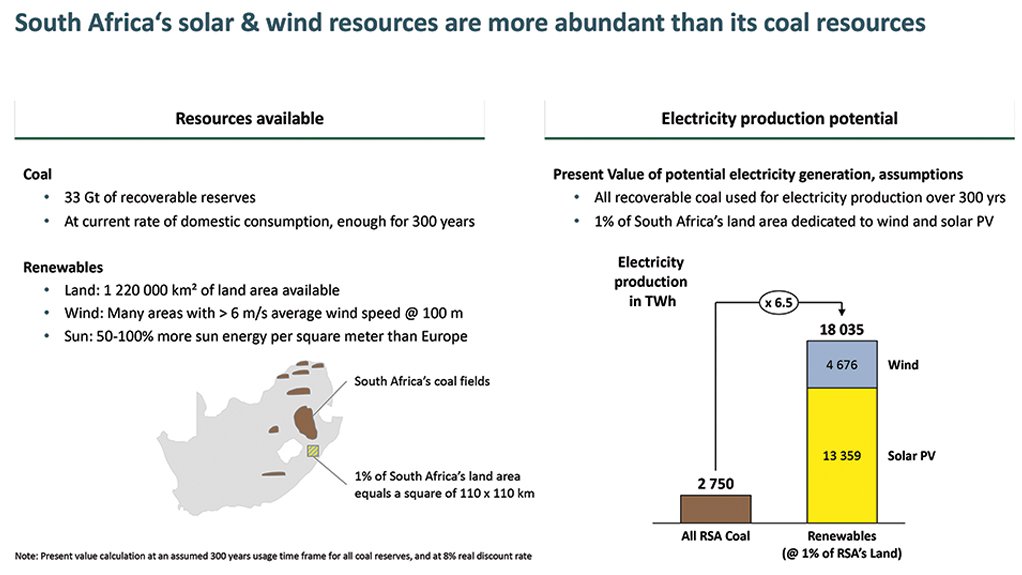 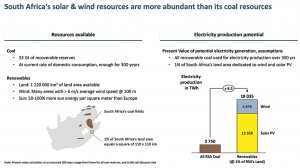 When the question arises as to what South Africa’s most abundant source of energy is, the usual answer is coal. South Africa has built almost its entire electricity system, as well as a good portion of its liquid-fuels industry, on the back of its plentiful reserves of coal. Further, it is estimated that there is still another 33 Gt (where 1 Gt is equivalent to one-billion tons) of the energy mineral yet to be mined, which equates to about 300 years at the current rate of domestic consumption.

In reality, though, South Africa‘s solar and wind resources are infinitely more ‘abundant’ than its coal resources. Instead of mining these renewable resources, however, technologies need to be deployed to ‘harvest’ them. To do this involves not only solar panels and wind turbines, but land.

Critics of wind and solar, therefore, often caution that it will simply take too much land to operate an electricity system in which the workhorses are no longer coal-fired power stations, but weather-dispatched solar photovoltaic (PV) and wind plants. The availability of land is undoubtedly a binding constraint on renewables-led systems in some countries, but definitely not in South Africa.

Add into that mix South Africa’s formidable solar and wind resources and a quite startling picture of abundance emerges. Many parts of South Africa have average wind speeds of better than 6 m/s at 100 m above ground, which is superior to the wind resources in many other countries, while its solar resource is one of the best in the world, with 50% to 100% more irradiation hitting 1 m2/y than in most parts of Europe.

If but a single per cent of South Africa’s land area, equalling a square of 110 km by 110 km, were dedicated to harvesting electricity from solar and wind farms, the present value of the potential electricity generation over the coal-equivalent 300 years, using a discount rate of 8%, would be more than 18 000 TWh. By comparison, if South Africa were to convert all its recoverable coal into electricity over 300 years, the present value of the potential generation, at the same discount rate, would be only 2 750 TWh.

In other words, the electricity generation potential of wind and solar over just a single per cent of South Africa’s surface area is 6.5 times larger than the country’s currently known reserves of unmined coal. Meeting South Africa’s present yearly electricity demand of about 250 TWh using renewable energy, meanwhile, would require only 0.3% of South Africa’s surface area to be dedicated to wind farms and 0.15% to the deployment of solar PV plants. Since solar PV plants can be built on wind farms, in between wind turbines, these two figures are not additive.

To put the 1% figure into further perspective, Germany’s renewables fleet already occupies more than 1% of that country’s surface area and provinces are currently debating whether to dedicate 2% or 3% of their land area for future renewables harvesting. This in a country that is far denser than is the case in South Africa, making it more difficult to dedicate 3% of the land to renewable energy. Should South Africa adopt a 3% threshold for renewables harvesting, the energy potential arising from such a move is 20 times greater than the country’s remaining coal reserves.

The obvious conclusion is that South Africa’s solar and wind resources offer a far more abundant source of energy than does coal. What’s more, these resources are not finite and are renewed at the same rate at which they are consumed. It would be interesting to know just how much of South Africa’s land is currently dedicated solely to coal mining, with all its associated environmental degradation.

Naturally, if all South Africa’s wind and solar plants were concentrated into a single square comprising 1% of the country’s surface area, it would represent a massive industrial complex in which no other economic activities could take place. In reality, though, these facilities would be spread across the country and, in many cases, coexist with other productive activities such as farming, manufacturing, mining and retail, as well as social activities such as human settlements, schools and hospitals.

True, utility-scale solar PV plants typically sterilise the land for other purposes, but much of South Africa’s solar PV capacity could be added to otherwise unproductive rooftops. Wind farms, meanwhile, essentially consist of largely unused land with a wind turbine here and there. Only the turbines themselves actually disturb land (turbine foundations and maintenance-crane area only use 0.3% of a total wind farm area) and can easily coexist with agricultural activities.

In addition, South Africa has large tracts of land that would otherwise be considered unproductive for agriculture or mining. This land could well be deployed in the interest of electricity ‘harvesting’, the reason being that, while solar and wind resources may be stronger in certain regions, the generic renewable-energy resource base across all nine of South Africa’s provinces is typically superior to those found in other countries.

Solar and wind are for South Africa today what coal was for the last century: the basis for economic activities and wealth creation. Required now is a mind shift through which South Africans, particularly those who have influence over policy, start to acknowledge that solar and wind are far more abundant than coal as an energy source and that land does not represent a constraint whatsoever for harvesting that energy source in perpetuity.