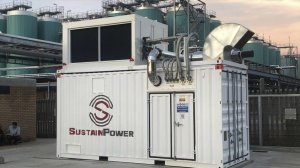 Martin highlights that there is, subsequently, a good business case for the use of SustainPower’s CHP unit at wastewater treatment plants and effluent treatment plants that currently flare excess gas.

The most recent installation took place May last year at multinational brewing and beverage company Distell’s Springs cider manufacturing operation, in Gauteng, to convert the biogas by-product from its effluent treatment plant into power.

This plant is designed to produce up to 100 m³/h of high-grade biogas with methane levels consistently hovering around 90%. Distell now enjoys an average daily energy reduction of 5 500 kWh/d, which is saving more than R300 000 a month – a 6.7% reduction in council expenses.

“Distell made a commitment to recycle its effluent as part of a green initiative on which it has embarked. Continuing to flare the gas that comes from that process would have been a waste, so using it to make heat and electricity was the right move environmentally and economically,” states Martin.

Designed and built in 2017 as a stock unit that could be tested and showcased to potential clients, to date, two biogas CHPs have been sold.

The Cape Town-manufactured unit is assembled by roughly 15 to 20 personnel, including design engineers, electrical panel builders and electricians, mechanical assemblers, welders and fabricators.

The lead time for the CHP is 16 weeks from date of order, with SustainPower having the capacity to produce four units a month with current factory loading.

“The first four are built at once, with two additional units staged behind in two-week intervals,” says Martin.

While the MAN engine and Motortech control system can only be sourced from outside South Africa, the remainder of the CHP’s components are sourced locally.

Once completed, the CHP units undergo a factory acceptance test where all functionality of the various systems is tested using gas.

In Africa, Nigeria presents the greatest potential demand for CHP as it is the leader in natural gas-to-CHP.

Martin explains that Nigeria has well-developed natural gas infrastructure and its industry would otherwise run on diesel power, owing to its unreliable grid.

“Unfortunately, in the natural gas to power game, South Africa still falls far behind Nigeria, even though it has significant natural gas resources.”

The company is predominantly focused on marketing its offering to sub-Saharan Africa, although not necessarily for gas to power in every location. It also has the SustainSolar brand, which uses its packaging expertise to deliver solar mini-grid packages to remote destinations across Africa.

SustainPower believes that the decentralised model is the best fit for the continent.

“Our mission is to change the way developing economies generate their power.  To that end, in 2019, we entered the standby market with our natural gas and Pramac liquid petroleum gas generator range and have already installed them at many homes and small businesses like restaurants and coffee shops. Load-shedding is hitting South Africans hard, and we wanted to provide an alternative to diesel.

“We are the only genset packagers in South Africa (to our knowledge) that only do gas.  We will turn down diesel work every time,” Martin concludes.