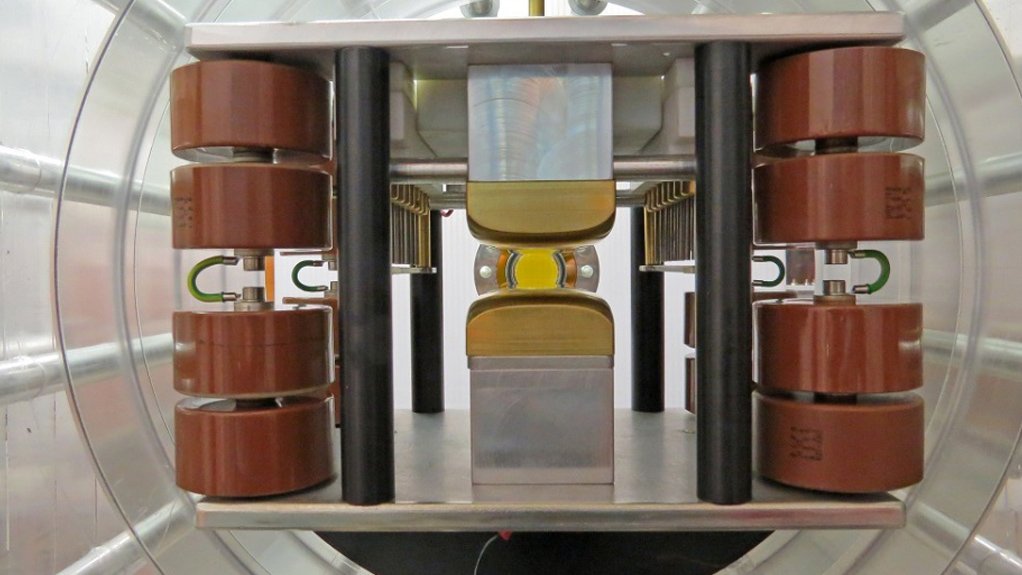 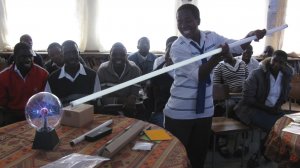 SIZEABLE DEVELOPMENT A robust miniature carbon dioxide laser test system for commercialisation and a large, high-pressure carbon dioxide laser to provide infrared light with Terawatt peak power are being developed
REACHING OUT Postgraduate students from the Laser Research Institute are involved in yearly outreach programmes, conducting scientific demonstrations at secondary schools and creating an awareness of science as a career

The Laser Research Institute (LRI), part of the Physics Department at Stellenbosch University, has achieved notable research outputs during the past three years, which has resulted in several innovative projects, such as the ultrafast laser spectroscopy, as well as the infrared spectroscopy and laser projects.

He further explains that a coloured dye is used in these cells to absorb sunlight more efficiently and that his research group is investigating how electrons hop from the dye after it has been activated by sunlight to the semi- conductor layer on which the dye is coated and then to the external electric circuit.

“The faster the electron is transferred from dye to external circuit, the more efficient the process. This can be practically applied by developing new materials for more efficient solar cells in this manner,” Schwoerer indicates.

“The presence of additives, and even that honey originated in another country, could be detected in a user-friendly way using infrared spectroscopy,” he adds.

A second spectroscopy technique is found in second harmonic generations spectroscopy, where LRI student Wilfrid Ndebeka studied buried interfaces in silicon and silicon oxide layers. The technique makes it possible to observe the build-up of electric charges at interfaces and in thin silicon membranes, which is relevant in the semiconductor industry and in the miniaturisation of electronics.

A third spectroscopic technique involves Terahertz radiation. It is a safe, nonionising radiation that is increasingly being used in security scanning, as it can pass through paper and fabric, revealing metal or biological matter. LRI student Shane Smith is building a Terahertz ellipsometry setup to investigate biological samples.

Moreover, Professor Hubertus von Bergmann, a world-leading expert in the design of gas lasers and one of a number of experts closely associated with the LRI, is collaborating with intelligent solutions provider PaR Systems as an industrial partner to develop a robust miniature carbon dioxide (CO2) laser for commercialisation and a large, high-pressure CO2 laser to provide infrared light with Terawatt (1012) peak power.

This is in line with the practice of gas lasers remaining the workhorse in many industry applications, with the potential to be scaled.

The LRI is also involved in workshops and outreach programmes. LRI director Dr Christine Steenkamp notes that the LRI regularly hosts workshops on laser physics and laser applications. The LRI is a founding member of the African Laser Centre (ALC), which is a virtual centre for promoting laser research and application in Africa and is supported by the South African Department of Science and Technology, she says.

Steenkamp says the LRI is a regular host of the yearly ALC student symposium, where ALC bursary holders showcase their research. The LRI has also hosted a number of training workshops on laser technology, laser spectroscopy and imaging, which are “well attended” by postgraduate students from different countries in Africa.

Last year, the ALC Workshop on Laser Imaging, held in November, was attended by 49 delegates from 18 countries.