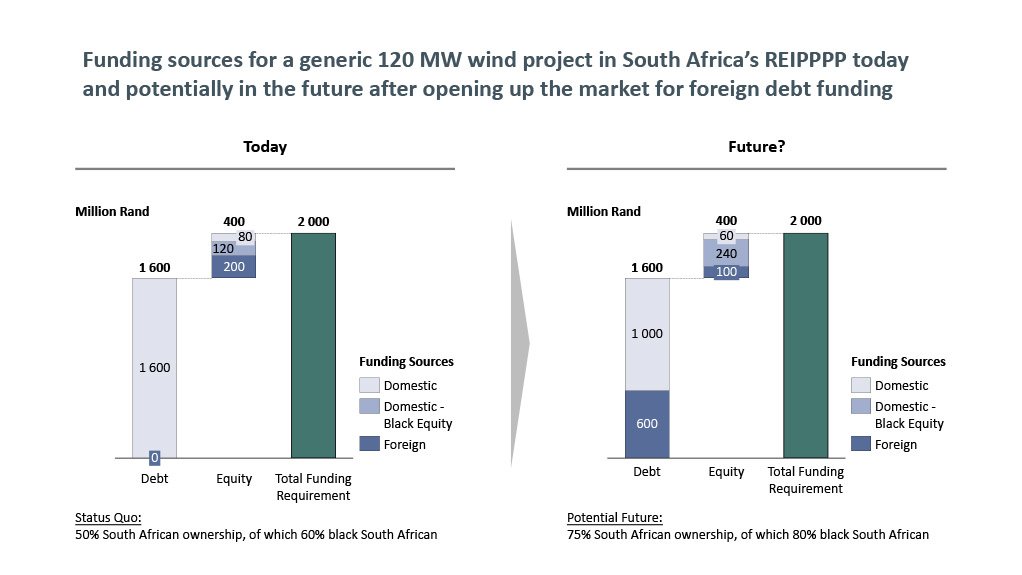 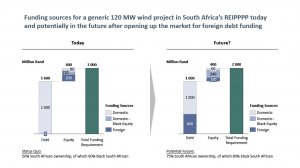 The renewable-energy industry in South Africa is effectively at the very beginning of an S-curve. With 5% of South Africa’s electricity provided by renewables, the industry is nowhere near its ultimate size. In 20 years from now, it should be at least ten times larger than it is today. When looking back on the sector’s development, say in 2040, key measures of success will be not only whether the fleet of solar, wind and flexible generators is delivering reliable, low-carbon electricity at least cost (see also Engineering News March 22, 2019, page 49 ) and with the most jobs (see also Engineering News March 8, 2019, page 51 ), but also whether the South African ownership base of those assets is reflective of the country’s racial demographics.

Indeed, the transformative opportunity associated with building a new industry from scratch, such as renewables, is surely many times more potent than is the case in established industries, such as mining or financial services. Instead of inducing transfers from one category of shareholder to another in enterprises that are typically in a steady state, the embedding of ambitious transformation targets in an entirely new industry holds genuine potential for black shareholders and for the country.

Achieving such an end state in an industry that, by its nature, is capital intensive will be no easy task. Few South African funders, such as the commercial banks and the development finance institutions, will fault the aspiration of a fully transformed renewables industry. Nevertheless, they will immediately point out that there is insufficient black South African equity in the market. Further, it will be important to sustain and increase foreign interest in South African renewables to ensure that domestic funding in energy infrastructure does not entirely absorb the funds for vital investments required to address other social and economic infrastructure backlogs. Without question, the advantage of foreign direct investment is that much-needed capital for much-needed assets is sourced from outside South Africa. The disadvantage, though, is that non-South Africans are left owning the domestic energy asset base.

Before offering a possible solution to this dilemma, it is important to illustrate how the funding requirement is currently met for projects procured under the Renewable Energy Independent Power Producer Procurement Programme (REIPPPP). A large wind farm of say 120 MW will typically have a total funding requirement of R2-billion. Currently, this requirement is met through a combination of R1.6-billion in debt (80%) and R400-million in equity (20%). The funding will be provided in a so-called project- financing setting, where the project’s revenues are the only collateral for the debt providers – in most cases, the local commercial banks. Up to today, a bit more than half the equity has been provided by domestic investors, and of that 60% by black equity investors. There are instances where foreign energy companies have funded the project’s entire capital requirement from their own corporate balance sheet, but this is the exception rather than the rule.

In summary: the South African commercial banks dominate the debt-finance portion and the equity is shared 50:50 between local and international investors. This mean, in the “average project”, 90% of the overall funding needs is provided by domestic sources (80% debt, 10% equity), while 10% is provided by international sources (10% equity). Clearly, equity providers take much higher risk than debt providers and it is a positive signal for South Africa that international equity investors are indeed willing to take the country and exchange rate risks. However, the distortion between funding sources and ultimate ownership is arguably still a sub- optimal situation.

So, how could this be addressed? How can international funding be increased while at the same time black South African ownership is strengthened? One possible way to square the circle is to flip the debt-equity equation, whereby foreign lenders become more active in providing debt finance to create more headroom for black South African equity.

In principle, there are two potential sources of foreign debt funding.

First, there is the category of foreign commercial banks. For them, the rand-denominated tariffs for renewables assets are an implicit barrier to provide part or all of the project debt. The reason is that the exchange rate risk for a euro- or dollar-based commercial bank to accept rand-based revenues of a project- financed renewables asset as collateral for their debt is too onerous, especially over the long loan terms of up to 18 years. However, it would be worthwhile to investigate what (potentially small) adjustments to the standard power purchase agreements foreign lenders would require to start lending into the REIPPPP. A safety net that only takes away the risk of extreme exchange rate shocks from the international banks might already do the trick.

Second, international climate finance can be attracted if South Africa makes a move towards decarbonising its electricity sector more than it would be under a pure least-cost investment plan. In other words, the international community could make significant debt funding available, conditional on South Africa moving boldly into the decarbonisation direction. Those funds would likely be disbursed through the South African development finance institutions.

Opening up the debt funding in South African renewables to foreign banks would have two effects. First, it would increase competition in the provision of the project debt, which reduces the project debt’s interest rate and, hence, will allow even lower tariffs for solar and wind projects. Second, it would free up capacity for the domestic banks to fund even more black equity, which is typically in short supply.

As a result, more of the capital requirements for South Africa’s renewables asset base would be funded from international sources, while a higher percentage would remain in South African ownership – specifically in black ownership. A truly squared circle.