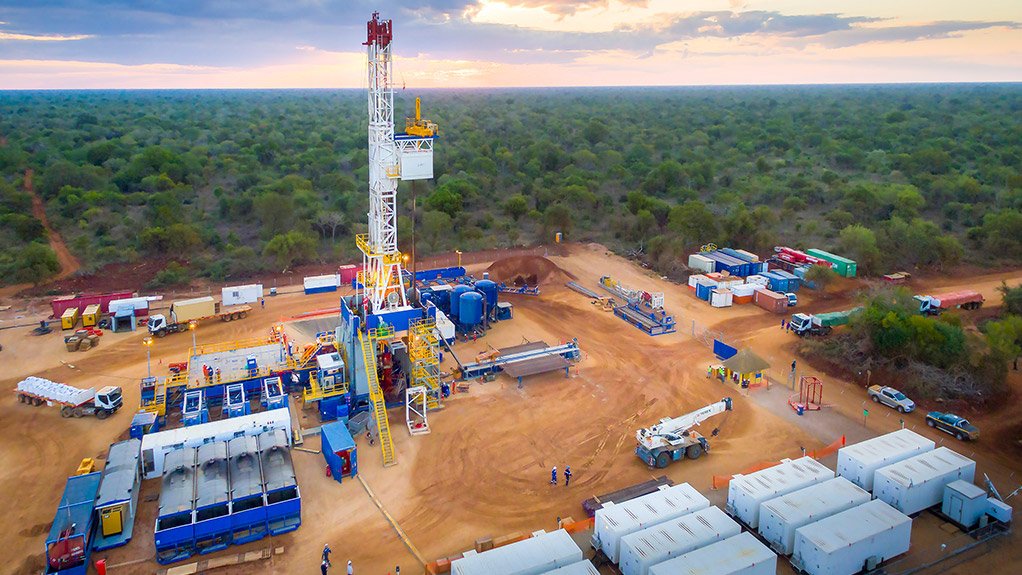 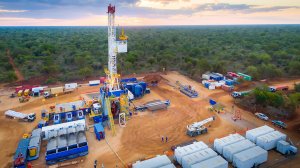 Photo by Sasol
The SMP-105 drill rig in action

In stark contrast to its rugged surroundings in the Temane bush and not far from the picturesque Mozambican coastal town of Vilanculos, one of the highest-technology drill rigs yet to be deployed in Africa rises out of the orange-brown earth and towers over the surrounding bush.

The rig – known as SMP-105 and part of French drilling specialist Societe de Maintenance Petroliere’s (SMP’s) rig fleet – is also the most sophisticated ever contracted by energy and chemicals group Sasol, which is further developing the hydrocarbon resources for which the Southern African country is becoming increasingly renowned.

Sasol drilling operations manager Hector Magagule has worked with such equipment before during his in-field training in Oman some ten years ago. However, he tells Engineering News Online that the group’s previous campaigns in Mozambique, which took place between 2003 and 2011, all relied on older-generation mechanical rigs, which did not have the intelligence or power of SMP-105.

Manufactured in Houston, Texas, by engineering group Jelec, the rig is large, standing at just over 34-m tall, with a power rating of 2 000 hp. However, it is made to a modular design, which makes its assembly less daunting and physically demanding than that of a traditional rig. “It’s like assembling Lego,” Magagule quips.

But the rig’s true sophistication lies in the level of automation and remote control that has been integrated into the design, elevating SMP-105 to the level of a so-called “cyber rig”.

Drilling operation takes place in a gaming-type environment, with the operator, who sits in an air-conditioned control room, using a joystick and touch-screen technology to perform vertical and horizontal drilling tasks deep below surface.

During the current campaign, 200-mm diameter vertical holes will be drilled some 2 km into the earth, before the hole is “deviated” in a semicircular curve just above the zone of interest. This horizontal deviation will help maximise the gas or oil recoveries once the well is eventually brought into production.

The rig is also continually collecting data as drilling advances, which will be used to guide the way Sasol and it contractors approach the remaining wells that will be drilled as part of the development of gas reserves in Temane and Pande, and oil prospects in Inhassoro. The rig is also connected to SMP’s command centre in France, from where technical support and trouble-shooting services can be provided.

Positioned on a 100m-by-100m well-pad cut into the bush, the rig also incorporates an automated pipe-handling and racking system, while the rig floor is equipped with a spill-containment system that collects any leaked drilling fluid and returns it to the fluid tanks. “Therefore, the rig is not only more powerful and versatile in the types of drilling it can perform, but it is also far safer to operate and more environmentally friendly,” Magagule enthuses.

The development field team – which comprises about 200 people, who will support the programme until late 2018 – are preparing the drill sites for eventual production.

This preparation includes the installation of a so-called ‘Christmas tree’, a system of valves and fittings that control the flow of oil and gas. Before the production phase begins, however, the wells will need to be connected to the central processing facility (CPF) through the creation of new pipelines and operational infrastructure. Until then, the wells will remain temporarily suspended.

In total, Sasol will invest $1.4-billion to develop the 16 wells and to expand its CPF in Temane. The majority of the gas currently produced from these fields is processed at the CPF and transported along the 865 km Rompco pipeline to South Africa, where Sasol uses it to produce electricity, fuel and chemicals and sells the balance to some 320 industrial customers. But as part of the recently approved production sharing agreement, the Mozambican authorities have indicated that the additional gas should be used to fuel a 400 MW gas-to-power plant to be developed near to the CPF.

Magagule tells Engineering News Online that the first well has been completed and that its performance was in line with expectations, before the field development team temporarily suspended gas flow and moved on to the next drill site, which is in close proximity to the CPF and 26 km from the initial site.

The SMP-105 rig was relocated to the second Temane pad in mid-July and once drilling is complete, it will be deployed, probably in mid-October, to the Inhassoro field, where Sasol is hoping to strike condensate.

The drill sequence has been determined by Sasol’s geologists and reservoir engineers and has been designed to progressively increase knowledge of subsurface conditions, which, in turn, informs the next development steps. “It’s all about value of information and gathering input to feed in to the next phase.”

The entire campaign, which also includes one exploration well some 200 km away from the Temane, Inhassoro and Pande development areas, is expected to continue until around September 2018.

For Magagule – who started his career as a mining engineer in South Africa’s diamond mines and who has participated, in various capacities, in just about all of Sasol’s previous drilling efforts in Mozambique – the current campaign is his first as an operations manager. He is quietly confident, however, that the drilling expertise and high-tech equipment available to him could well assist him and his 200-person field team establish a new field-development benchmark for the group.