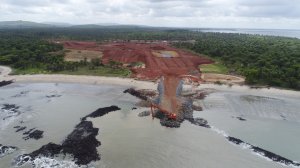 ANCHORS OVERBOARD Despite major technological advances over past decades, it still remains a mammoth task to plan, manage and construct a marine infrastructure project

Construction companies Stefanutti Stocks Coastal and Axsys Projects have partnered for the Maydon Wharf reconstruction project in Durban, KwaZulu-Natal, and they expect the project to be completed next month.

The project started in 2014 and entails the reconstruction and deepening of berths one to four, 13 and 14.

The project won the South African Institution of Civil Engineering award in October last year for most outstanding civil engineering achievement in the railway and harbour projects category for 2015/16.

Stefanutti Stocks Coastal MD Matthew Horwill tells Engineering News that the biggest challenges with offshore and marine projects like this one is unforeseen conditions, such as geotechnical conditions, the weather, tides and swells, as well as objects encountered below the surface of the water that were either not detected during the pre-inspection process or that continue to present a challenge regardless of pre-inspection.

“At a number of these ports, the discovery of objects that were at some stage in history lost overboard or forgotten about, can cause delays and frustrations in the construction of new works.” For example, when Stefanutti Stocks Coastal excavated the existing shoreline and constructed the new rock revetment for shore protection in Port Nolloth, in the Northern Cape, the company discovered timber piles that were part of an estimated 100-year-old jetty.

This area of the project was considered a heritage site and Stefanutti Stocks had to take care during construction to preserve it.

Another challenge with offshore construction projects is labour unrest, which often occurs in South Africa, owing to dissatisfaction about wages and wage negotiation processes between employers and other industry stakeholders and unions.

“It is something we are sensitive to, as construction is a very labour-based and labour-intensive operation. Our work on ports is less affected, owing to mechanisation; however, the issues still overarch and tend to spread across all our operations,” explains Horwill.

He adds that the construction sector is also affected by community unrest. Stefanutti Stocks is often required, as part of a project’s deliverables, to employ unskilled general workers from communities surrounding the areas they work in, and to provide them with training, skills, experience and growth opportunities.

However, Horwill notes that, often, the number of work opportunities expected by communities exceeds those that are available, even on large construction projects. Communities will then express their dissatisfaction if these expectations are not managed and communicated properly.

In addition to the company’s effort to upskill people, it also presents in-house training at its facility in Johannesburg, Gauteng, which extends to on-site training during construction projects, depending on where it is operating.

Horwill points out that on-site training specifically focuses on unskilled entry-level workers. “The health and safety of these workers, as well as their ability to work to high-quality standards, is vital, and we provide the training necessary for them to understand the construction environment.”

For more advanced skills, Stefanutti Stocks has simulators to create real construction environments and situations for its plant and equipment operators and specialists.

“Skills development is key to the business and its sustainability. The primary focus is to make sure we have a pool of talent available, but we also focus on uplifting communities so that they have acquired sustainable skills by the time we complete a project and leave the area,” he notes.

Horwill concludes that, with Stefanutti Stocks having an in-house training department developing modules, including health and safety, quality control and assurance, and fundamental, project-based construction practices, they are not using generic, off-the-shelf modules but rather producing bespoke training material tailor-made for site-specific skills, based on industry best practice.

Construction company Stefanutti Stocks is due to complete installation of a marine facility in December for African Gas & Oil Limited (AGOL) in Mombasa, Kenya.

This project’s planning and logistics, including the design of temporary works, layout and preparation of the barge that was transported across the ocean from South Africa to Kenya, started in February.

This came after WSP Coastal’s recommendation of the company to AGOL, after previously successful projects.

The project entails the installation of a load-out platform, complete with berthing and mooring dolphins.

Stefanutti Stocks Coastal contracts manager Andre van der Merwe notes that a particular challenge on this project is that the platform is located 200 m away from land, which affects the design of the barge layout, as it will serve as the only firm base for the construction operations – driving 900 mm piles to a 50 m depth.

The Stefanutti Stocks Coastal team will work in an environment with strong currents, a high tidal range and large volumes of water, which offers another challenge for the project.

A further technical and safety consideration is that construction activities will take place above an existing live pipeline that pumps liquefied petroleum gas from the on-land storage facility to the tankers.

“We are pleased to work with WSP engineers again and we are looking forward to delivering the same standards of quality and safety that led to AGOL’s awarding us the project,” concludes Van der Merwe.