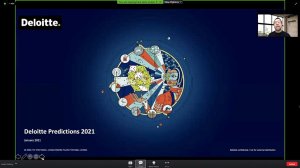 The twentieth yearly edition of the TMT Predictions report further highlights how many trends are being driven by the global Covid-19 pandemic’s economic and societal impacts, resulting in intensifying growth in video, virtual and cloud technologies, as well as in media segments such as sports.

Talking to some of the nine predictions during the virtual launch of the report, Deloitte Global TMT head of research Paul Lee notes that the first prediction concerns the evolution of the mobile network.

The open and virtualised RAN market, which gives mobile network operators the potential to reduce costs and increase vendor choice as they adopt 5G, while still in the early days, is accelerating owing to the technology’s alignment with carrier needs.

“This year, we are looking further into the network, specifically around the way in which the RAN is procured. We are predicting a migration to the opening up of the RAN,” he told delegates during the launch.

He notes that this has already started to happen and it is expected to gather pace this year.

However, high costs, limited flexibility and constrained vendor choice are prompting the operators to shift away from such systems toward more open, standards-based, software-centric virtual platforms.

Driving the trend is the potential for cost savings for capital expenditure (capex) and operating expenditure (opex), Lee says, highlighting the 30% in capex reductions, with opex registering similar reductions, reported by a Japan-based operator.

“The open RAN market is still in its early days. We estimate that there are currently 35 active open RAN deployments across the globe, many of which involve mobile network operators testing open RAN in greenfield, rural and emerging markets. Although deployments are starting slowly, they could easily double in 2021.”

While it could take three to five years for the technology to fully mature, open RAN adoption is expected to accelerate rapidly owing to the logic of its network design and its strategic alignment with carrier needs, the TMT Predictions report outlines, noting that the open RAN market has the potential to grow substantially, with some estimating double-digit growth rates that will push open RAN to approach 10% of the total RAN market by 2025 from less than 1% today.

Meanwhile, Lee assures that concerns about 5G’s health risks have no basis in fact, with the TMT report noting that it is very unlikely that the radiation from 5G mobile networks and 5G phones will affect the health of any single individual.

“Over the years, and particularly over the last three years, we always get questions around the impact of 5G on health,” Lee comments.

Compelling, consistent and pervasive education about 5G is required urgently to curb popular fears, as it is difficult to find an accessible explanation of how mobile networks work.

“There are lots of scientific explanations of how mobile networks work, written for people in science, so there's definitely a gap between those who understand and the mass market, who would like to understand,” he says, indicating that these rumours can sound plausible to the mass market, particularly if there are gaps in the knowledge that is shared.

Another prediction is the start of the 8K “wave”, with sales of 8K TVs likely to reach $5-billion in 2021, with equipment and services for producing 8K content generating hundreds of millions of dollars more.

Meanwhile, the report also shows that, in 2021, there will be more than 400-million “video visits” to doctors worldwide; global cloud spending will grow seven times faster than overall IT spend; spending on digital reality headsets will rise 100% over 2019; the global market for intelligent edge computing will expand to $12-billion; and the sports technology market is seeing an upswing of venture capital interest, with over 3 000 global deals and funding rounds over five years.