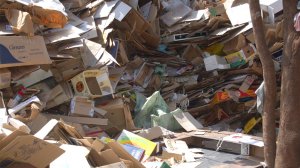 During the inaugural Wastex Africa waste management, recycling and environmental protection exhibition and conference at Gallagher Convention Centre, in Midrand, in May, she pointed out that statistics indicated that South Africa generated 108-million tons of waste in 2011, of which 98-million tons were disposed of at landfill sites, with only 10% of the total waste generated being recycled.

Oelofse told conference delegates that 55% of the waste disposed of at landfill sites in that year was an unclassified general waste stream, which, when classified into specific waste streams, had the potential to be recycled or reused.

“This classification and recycling process provides South Africa with an opportu- nity to grow its economy through waste management.”

To create and sustain jobs, Oelofse said, the waste industry needed to formalise the jobs currently held by informal waste collectors and recyclers in the industry and then create new jobs in addition to those.

Department of Environmental Affairs (DEA) chemicals management chief director Obed Baloyi, also speaking at the conference, agreed, adding that job creation was one of government’s key focus areas, not only in the waste management sector but also in every economic sector in South Africa.

He noted that the global recession resulted in many job losses and to deal with the challenge of unemployment, a global transition to a sustainable, low-carbon economy would create a large number of green jobs across many sectors, with waste management being one of the key sectors to drive the green economy.

Baloyi also said combined efforts by all the economic sectors in the country could ensure that government’s New Growth Path target to reduce the unemployment rate by 6% by 2030 and the National Development Plan’s aim to create 11-million jobs by 2030 could be achieved.

“Job creation throughout the waste management processes must be increased through the incorporation of a labour-intensive model, focused particularly on the youth, into waste management. In this way, the country will build a sustainable skills base for the waste sector, ensuring its continuity,” he told Wastex delegates.

Baloyi said the DEA was considering ways in which it could facilitate the country’s job creation goals and had launched the Youth Jobs in Waste Programme, in Phuthaditjhaba, in the Free State, last month.

The Youth Jobs in Waste Programme is the result of a study that the DEA undertook in 2007, which assessed the status of waste management service delivery and the capacity of local governments to carry out such service delivery effectively. The study presented an account of the backlog with regard to solid-waste service delivery in all municipalities in the country.

The Youth Jobs in Waste Programme, which will be rolled out in five provinces – the Free State, the North West, the Eastern Cape, KwaZulu-Natal and Limpopo – aims to create job opportunities, on-the-job training and continuous upskilling, as well as enterprise development for the youth.

An estimated 1 000 job opportunities will be created by placing young people at municipalities as landfill-site assistants, waste collection administrators and environmental awareness educators.

The DEA says 330 young people were recruited for the project in the Free State, while 326 youths will be recruited in the North West and 140 youths each for the Eastern Cape, KwaZulu-Natal and Limpopo.

Meanwhile, Oelofse noted that there were also opportunities in the waste sector to improve working conditions and to make workers feel worthy and that they were earning a decent living.

This could be achieved through upskilling unskilled or low-skilled workers, which would, in turn, improve their skills levels, assist them in earning a higher income and socially uplift them.

Meanwhile, the IWMSA had also noted at the conference that many new small, medium-sized and microenterprises were entering the waste sector in developing countries like South Africa, but lacked the sustainability to operate successfully.

To ensure the sustainability of these enterprises, the institute focused on capacity building and training, said Oelofse.

People and organisations that were active in the waste sector needed to be trained in inte- grated waste management and in the legal requirements, compliance and ethics of waste management, she added.

“If we can ensure that everyone is aware of what is required in terms of better waste man- agement and legislation, regulations would be better enforced and complied with,” asserted Oelofse.

Further, she pointed out that the industry required greater enterprise development, specifically in waste collection and sorting systems, as well as in the extraction of usable resources from industrial waste, “which is largely an untapped and underdeveloped waste stream”.

The industry also needed to consider the development of new products from waste resources. Oelofse added that the country had to consider improving the environment friendliness of consumer goods by using more recyclable components, or recycled materials, and, in turn, making the associated waste more recyclable.

Considering the ever-decreasing amount of available landfill airspace in many of South Africa’s major metropolises, Oelofse also highlighted the need for innovations in waste treatment and disposal technologies.

“As many metropolitan areas cannot realistically reduce the amount of waste they generate, owing to increasing economic activity, they have to consider alternative ways to manage waste through recycling, beneficiation or energy generation to ensure that the country’s landfill airspace is optimally used and is available for as long as possible,” she said.