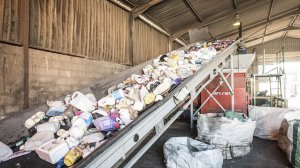 The South African plastics industry requires a constant stream of clean, high-quality plastic waste to maintain and increase the level of mechanical recycling in South Africa.

While there has been concern over the past few years that the amount of waste exported is increasing, findings from the 2015 plastics recycling figures published in May indicate that exports have ensured plastic waste is diverted from landfill.

The results from the plastics recycling survey released by Plastics|SA indicate that plastic-waste exports dropped by 48% in 2015, which resulted in a negative impact on diversion numbers – although 3% more plastic waste was mechanically recycled.

“South African mechanical recycling competes with the best in the world, and waste which is exported is normally good quality and clean. However, these exports reduce the amount of waste we have available for recycling and also impact artificially and negatively on the price of waste,” says professional industry association Plastics|SA executive director Anton Hanekom. He states that, while exporting recyclable plastic material does bring in foreign exchange, which has a positive impact on the country’s gross domestic product, the export of good-quality waste in large quantities duly impacts on South African recycling operations.

“The industry sees a fair amount of movement yearly in terms of new recycling companies entering the market. However, it also sees a number of companies exiting the market,” Hanekom avers.

However, he points out that plastics recycling companies have shown compounded growth of 5.5% a year over the past five years and expect this growth to continue under current conditions, despite a challenging economic climate.

“The drop in fuel prices has had a knock-on effect on polymer prices and, therefore, also impacted on the price that recyclers can achieve for recyclate. The industry maintains that priorities should be given to recycling waste into new products,” Hanekom notes.

He highlights, however, that industry needs to find ways to deal with those plastics that cannot be recycled, owing to insufficient quantities or greater costs involved in the transport of the waste.

Hanekom notes that this will increase recycling beyond what companies are achieving through mechanical recycling. Plastics|SA’s initiative of sending zero plastic to landfill by 2030 also depends on the introduction of separation-at-source (SAS) infrastructure and the creation of material recovery facilities, where government and municipalities play a big role.

He adds that SAS requires an effective management of the waste gathered through kerbside collection, noting that, ideally, the process needs to be implemented weekly.

“Many cities don’t have the funds or the skills to implement such a collection scheme. The recyclables then need to be sorted manually or semi–manually. For this to take place, infrastructure is required for conveyors, tables, balers and vast amounts of space. As there is no accurate costing in place for current landfilling, companies consider any SAS an additional effort.”

Further, Hanekom believes that South Africans should try to maintain a recycling culture, whereby citizens act responsibly in terms of products bought and the packaging of the goods that they use or consume.

“We need to see the value in the waste and do our part by putting it in a bag, which can be collected for recycling. Cooperation and collaboration among all stakeholders are key,” he concludes.