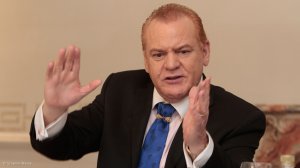 JOHANNESBURG (miningweekly.com) – Gold miner Gold Fields would pilot two new mining methods at its South Deep mine, in Gauteng, over the next 12 months, with the potential to enable the mine to reach its envisaged steady-state output of between 650 000 oz/y and 700 000 oz/y quicker and easier, CEO Nick Holland said on Thursday.

The new mining methods would be piloted in areas outside the current mine plan on the eastern boundary of the mine and would, therefore, not affect current operations.

Speaking to Mining Weekly Online after a presentation of the company’s results for the second quarter of 2014, Holland explained that the first new method that would be piloted comprised changing the dimensions of the mine’s destress from 2.2 m x 5 m to 4 m x 4 m.

“That will enable us to use conventional equipment as opposed to low-profile equipment, and we can also do the support and development much quicker and cheaper,” Holland said.

The second mining method to be piloted would, however, move the mine away from the destress methodology and towards a one-pass system, he noted.

“[With this method], we essentially put our development drives into the orebody, we do vertical slots at 55° at intervals of about 15 m, and we immediately mine the space between the slots, which becomes open stoping.

“As you mine it immediately and backfill it immediately, it is much quicker in terms of opening up the orebody. With the current methodology of distress, you can have two- to three-year lead time, where this has a six-month lead time,” Holland stated.

He further pointed out that this method had successfully been used elsewhere in the world, adding that Gold Fields was also currently using this mining method in Australia, although in that country the development was vertical, while in South Africa it would have to be done at an angle.

“This might well be something that gives us a game-changer on the South Deep orebody,” he said, adding that the method had significant potential to derisk the mine’s build-up plan and future production.

Holland said that, should one of the two new mining methods be found suitable following the pilot period, Gold Fields could potentially roll it out as soon as 2016.

The company’s revenue increased 4% quarter-on-quarter, from $715-million in the quarter ended March 31, to $747-million, as a result of higher gold sales, which was partially offset by the lower gold price.

Normalised earnings from continuing operations for the three months amounted to $25-million, up from $21-million during the March quarter, and losses of $36-million for the June 2013 quarter.

“During the June 2014 quarter, the group continued to focus on improving the execution and delivery at all the mines in the portfolio, to improve margins and generate free cash flow.

“This effort has achieved appreciable success in the Australia, West Africa and South America regions, while in the South Africa region there is ongoing rebasing of South Deep to set it up for medium-term success,” Holland commented.

During the quarter under review, South Deep’s production declined 14% quarter-on-quarter, from 59 200 oz in the three months ended March 31, to 51 100 oz, owing to safety stoppages and an extensive ground support remediation programme.

Holland indicated that Gold Fields would, during the third quarter, focus on completing the support programme at South Deep and get the mine back to normal production levels during the fourth quarter.

South Deep was still expected to reach cash break-even during the first half of 2015.

Meanwhile, Holland stated that all group activities at its operations were singularly focused on the objective of generating a sustainable free cash flow margin of at least 15% at a $1 300/oz gold price, without compromising the long-term sustainability of the orebodies through a lack of investment in ore reserve development and stripping, or through high grading.

During the quarter under review, Gold Fields exceeded this target for the first time by achieving a free cash flow margin of 18%, compared with 13% in the March quarter.

Year-on-year, the group’s AISC improved by 26%.

Holland noted that, by generating a free cash flow margin of 15%, the company was effectively setting its break-even gold price at $1 050/oz.

He added that, should prices go up to beyond $1 300/oz in future, the gold miner would still keep its discipline and not be lured by the low-grade extra ounces that could be used.

Gold Fields declared an interim dividend of 20c a share payable on September 15.