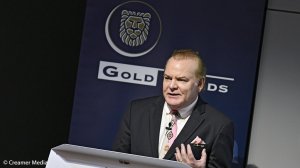 JOHANNESBURG (miningweekly.com) – “What you’re seeing over here is one of the first wind turbines that we put up in Australia, a mine where we’re going to have average renewable input into our energy usage of about 57%,” was the first sentence stated by Gold Fields CEO Nick Holland as he flashed up a picture of a wind turbine at the commencement of his presentation of a superb set of results.

Keeping with the new technology theme, he added: “…and that picture’s been taken by a drone in the middle of the outback, 1 100 km from Perth”. (Also watch attached Creamer Media video.)

While the Australian government gave Gold Fields a cash grant to help it to fund the 23 MW renewables project at Agnew, the company has still not received the go-ahead to build a 40 MW solar plant at a large mechanised mine in South Africa – at a time when the next stage of the Australian project is already well ahead.

Referring to the opening picture of the ‘green’ energy installation that was still flashed up on the large screen at the JSE auditorium for a prolonged period, Holland stated: “That gives you an indication of our seriousness to have an impact on climate change, and you know what? It's good business. It will actually be cheap in the long run to power more of our mines with renewables than it will be with conventional energy sources.”

All this preceded the big news of the Johannesburg- and New York-listed company achieving a 12-fold year-on-year 2019 profit increase to $343-million from its nine gold mines in five countries.

The contribution from the company’s only remaining South African mine, 222 000 oz at an AIC of $ 1 259/oz, was the worst of all regions, but still profitable. South Deep in Gauteng fared well below the company’s mines in the Americas, Australia and West Africa, but it is out of the red.

“South Deep has had a tremendous turnaround,” said Holland.

It is now cash positive and in the last three months of 2019, the mine, with a massive 38-million-ounce gold resource, generated R300-million.

“That shows you what can be achieved with the right focus. It was never a question of the orebody not being here,” he said.

A grade of 5.5 g/t to 5.75 g/t follows when the long-life South Deep operation is mined with spacial correctness at the right volume.

“That means you’ve got to destress, open up the cuts and get in there and start stoping into these big cavities.

And they are big. One could probably drive a double-decker bus with a roof rack into the cavities.

“We’re getting much better at mining these big cavities. The resolution between compliance to plan and the plan is improving significantly. Some of the stopes are now getting very close to a 100%. That was unheard of a few years ago,” he said.

Seventy-five per cent of South Deep production is hedged, which will underwrite its performance in 2020.

“Our key focus right now is to improve the short-term performance of South Deep. That will inform options down the road. We don’t think there is a big rush. We think we’ll make some pretty good money again from South Deep in 2020,” Holland said.

HSBC mining analyst Leroy Mnguni followed up, asking Holland whether South African assets traded at discount to their international peers and whether he saw an opportunity to unlock value by selling South Deep and exit South Africa completely. “Is that something that’s still on the table that you consider from time to time?” Mnguni asked.

Holland said in response that Gold Fields was one of 2019’s top gold industry performers.

“If you remember when we unbundled and created Sibanye back in 2013, Sibanye became the top performing gold stock in 2014 across the global universe. Investors are after making good returns first and foremost.

“When you make business decisions, you’ve got to make them based on industrial logic, not on perceived multiples versus the multiples being achieved now. Our focus is to continue to deliver on this portfolio of assets and generate superior returns for shareholders,” he said.

In line with the Johannesburg- and New York-listed company’s dividend policy of paying out 25% to 35% of normalised earnings as dividends, Gold Fields declared a final dividend of 100 SA c a share taking the total dividend for the year to 160 SA cents a share (2018: 40 SA cents a share).

Strong operational performance, an increase in the gold price and lower project capital expenditure drove a significant swing in net cash flow, with $249-million generated during 2019, compared with an outflow of $122-million in 2018.

Mine cash flow for the year, which excludes project capital, was $552-million, compared with $345-million in 2018.