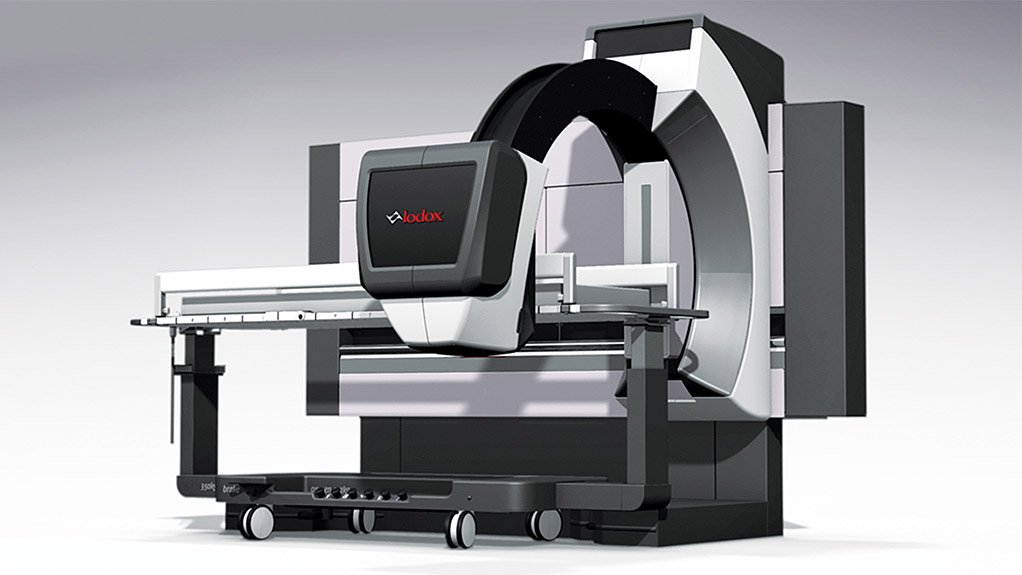 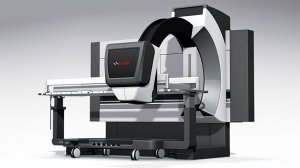 Recently featured on season nine of the popular US medical drama series Grey’s Anatomy, where it was described as “the most cutting-edge tool in diagnostic technology”, the proudly South African Lodox full-body digital X-ray scanner has registered significant uptake in market acceptance since its South African television debut in June, launching Sandton-based manufacturer Lodox Systems onto the world stage of health-related technological innovation.

As the only X-ray imaging system in the world that can take a full-body X-ray image, the Lodox scanner takes only 13 seconds to produce an accurate full-body overview of injuries and foreign bodies in a patient – and 16 seconds to produce a lateral scan – as opposed to a conventional X-ray machine, which requires up to 30 minutes and various individual X-rays to compile a full body image.

Locally designed and manufactured, the scanner uses a patented, specialised method of linear slot scanning radiography to produce large-format images with a single sweep of the X-ray source and detector.

“No other device can provide clinicians with such a fast and accurate picture of a patient’s entire body in combination with such a low radiation dose. This means that the device can be directly installed in the resuscitation area of an emergency room, without having to transport patients to a separate X-ray unit,” notes De Beer.

The Lodox scanner also permits easy access to patients in a trauma situation to allow for monitoring and resuscitation to take place while scanning is in progress, which is impos- sible with conventional X-ray technology.

Di Zio points out that, in cases of mass casualties, such as large traffic accidents, the high rate at which the machine can process patients allows for more accurate triaging – a process used by medical staff to prioritise the treatment of injured individuals into groups based on the severity of their injuries.

He further mentions that improving the ability of medical practitioners to accurately assess which patients are most critical and adapt treatment pathways accordingly will, ultimately, save lives.

“The reliability of the machine is also a feature that is especially valued in the trauma environment, where there is no scope for problematic or poorly functioning equip- ment,” adds Di Zio.

Forensic Pathology
While trauma centres remain the primary beneficiary of Lodox’s unrivalled technology, the scanner’s high-speed method of assessing a subject’s body, in multiple planes, is becoming increasingly popular in forensic pathology, as it eliminates having to move the subject to obtain a multi-angled view and enables autopsy staff to obtain X-ray images without the assistance of radiographers.

Di Zio points out that Lodox’s large-format imaging is also particularly useful in deter- mining the location of bullets and bullet shrapnel in gunshot victims and can assist, for instance, in identifying unclaimed bodies by revealing orthopaedic implants with traceable serial numbers.

The scanner further provides a greater level of safety for pathologists, who can obtain a complete image of the subject before starting an autopsy.

This is particularly relevant in South Africa, where the ability to screen for tuberculosis before opening a chest can allow for the necessary precautions to be taken to avoid potential infection.

Meanwhile, Lodox scanners have become “a gold standard” in several mortuaries and forensic centres in the US, according to De Beer.

“Our hope is for our product to be installed in government mortuaries throughout South Africa, as this will lessen the workload for forensic surgeons,” he tells Engineering News.

Two local mortuaries have installed a Lodox scanner to date, namely Salt River Mortuary and Tygerberg mortuary, in the Western Cape. Both scanners have been installed since 2007.

Additional Applications
While Lodox’s primary healthcare markets include the medical trauma and medico-legal (forensic pathology) sectors, the group is constantly exploring additional disciplines that could benefit from its technology, including bariatric and paediatric medicine.

With one installation at the Red Cross War Memorial Children’s Hospital, in Cape Town, children suffering from multiple traumatic injuries – as well as those whose conditions necessitate frequent medical imaging – are benefiting from Lodox’s technology.

Lodox product manager Dr Sarah Whiley tells Engineering News that some research indicates that one in 50 cancers (2%) are caused by ionising radiation from medical diagnostic imaging. This risk is increased if exposure starts at an early age, as small children with developing tissues are particularly susceptible to ionising radiation emitted by X-ray machinery, including the Lodox scanner.

However, the X-ray dose emitted by Lodox’s linear beam is the lowest possible dose, making it the safest imaging technology to use for children, according to Whiley. Another benefit of the low dose of scattered radiation is that a child’s mother can remain in the room to calm a scared or traumatised child.

Moreover, blurry imaging is eliminated, even when a patient shudders because of shock or fear, owing to the Lodox fan beam that captures the image millimetre by millimetre as the scan progresses.

Concerns about the weight-load capacity of the Lodox trolley and the difficulty of obtaining a quality image of overweight patients have also been addressed.

“The open design of the Lodox scanner caters for larger patients,” says Whiley, explaining that Lodox has designed a bariatric trolley, in addition to the standard trolley, to cater for patients weighing up to 300 kg.

Lodox’s thin, penetrating beam also enables radiographers to scan obese people better than a conventional X-ray. Where the beam of a conventional X-ray machine scatters as it establishes contact with the tissue of a larger person, the Lodox beam penetrates the tissue, creating a sharper image.

Value Engineering
Whiley describes the latest version of Lodox’s unique digital X-ray screening technology, dubbed Xmplar-dr, as an updated, more streamlined model than the former StatScan model, as it was designed to incorporate user-based suggestions that Lodox has collected.

“The main thing we focused on optimising was the usability of the machine,” she tells Engineering News, explaining that, although previous versions of the machine enabled users to conduct a scan in 13 seconds, it would still take time to prepare the machine for the scan.

The rotating C-arm of the Xmplar-dr now operates in conjunction with the trolley, enabling the user to choose between an anteroposterior, or flat front, and lateral view with a single button, while the machine automatically rotates the C-arm and sets the gurney at the desired height to obtain a good quality image.

Moreover, previous Lodox models relied on the radiographer’s personal judgment to decide on the correct dosage of radiation, depending on the size of a patient. The Xmplar-dr, however, automatically weighs a patient to determine the correct dosage.

This streamlines the process for the radi- ographer and allows for the best image quality, explains Whiley.

The Xmplar-dr also features a simplified user interface for enhanced ease of oper- ation. While Lodox had worked on simplifying the interface each time a new version of the technology was released, it was previously quite technical and not designed with radi-ographers in mind.

“We, therefore, took it upon ourselves to study the user interfaces of equipment commonly used by radiographers and found that many use a step-by-step tab-based system – simple and clean. As a result, we developed an improved user interface for the new system,” says Whiley.

The newly designed scanner is also more compact and features a solid base, making it easier for doctors to walk around the scanner to access a patient from all sides.

Lodox has also improved on the electronic engineering and serviceability of the machine, making the internal workings more accessible which, in turn, eliminates unnecessary downtime.

“Our system is mostly used in critical situations, which is why we had to improve on the serviceability, as it enables an engineer to address a problem instantly. This could save a life,” Whiley points out.

Global Footprint
The Xmplar-dr is yet to be installed at a public facility, as Lodox wants to ensure that the South African public sector will be the first to experience the company’s latest product. Whiley tells Engineering News that several large government hospitals are in line to be the first to have this system installed in their trauma departments.

Earlier versions of the Lodox scanner are currently in operation at more than 42 trauma and forensic pathology centres in eight countries, including the US, South Africa, Taiwan, Venezuela, Switzerland, Lithuania, the United Arab Emirates and Saudi Arabia.

“There is no reason why every country in the world should not have at least one Lodox machine.” He points out that, while Lodox is an advanced technological innovation, it was initially developed for use in emerging countries that have insufficient skills and resources.

De Beer points out, however, that certain African regions lack the funds to obtain a Lodox scanner, which is compounded by a lack of electricity access. This poses a significant challenge to Lodox in terms of improving sales on the continent.

“The scanner also requires a room with basic air conditioning, as an ambient room temperature needs to be maintained, but many developing regions do not have this luxury,” he says.

Still, the market in developed countries remains robust, as a result of the scanner’s timesaving and safety benefits, says Meer.

Coming Full Circle: Future Developments
While Lodox’s technology is currently focused on medical trauma management and forensic pathology, the scanner was originally developed in the 1990s as a security device to prevent the theft of diamonds by workers at mining giant De Beers’ operations.

Drawing on this experience, Lodox is developing a new upright security scanner, which could be adapted as an upright medical scanner.

As some of the security-centred intellectual property still belongs to De Beers, the mining major will continue to market Lodox’s technology in the security sector.

A total of 14 machines are still located in De Beers’ mines and, as soon as the com- mercial security machine has been developed, De Beers will become the primary agent for the security scanner.

“One of the many strengths of Lodox is its in-house expertise, including an ongoing partnership with the University of Cape Town, which enables the company to continuously develop its product offering,” says Meer.

He further highlights the company’s capacity to meet international compliance standards, including those prescribed by the Food and Drug Administration, of the US, and the Conformite Europeene, of Europe.

IDC Involvement
The IDC has been a long-standing shareholder of Lodox systems and, in 2010, became a 95% majority shareholder to support and fund the company’s ongoing market research, development and product improvements.

“Lodox is a perfect fit for the type of company that the IDC wants to support – an internationally competitive local manufacturer using local technology,” says Meer.

He explains that the IDC’s role has been to assist Lodox in breaking into the market with a new product and to support the company in the commercialisation process.

“Initially, it was a high-risk investment, but the potential was always clear. It was just a matter of optimising the product, penetrating the market and proving to people that the Lodox scanner will be a viable investment.

“Lodox is something we are extremely proud and supportive of, though there is still plenty to be done in terms of global market acceptance. Still, the company has proven itself and the success of the product, which has passed through the initial development stages to emerge as a world-class product,” he concludes.