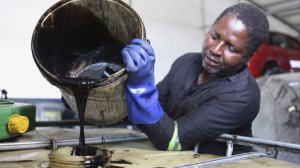 More than 1.5-billion litres of hazardous used motor oil has been kept out of the environment.

This is thanks to the efforts of the Recycling Oil Saves the Environment (ROSE) Foundation which celebrates 25 years of successfully driving the responsible recycling of used lubricating oil. ROSE is an example of a successful frontrunner in the voluntary formation of an Extended Producer Responsibility (EPR) programme in South Africa and has enjoyed great successes in its quarter of a century of operation.

About 350-million litres of new lubricant oil is sold in South Africa every year. The new oil is a combination of locally manufactured, as well as imported lubes. Of the oil that is sold, about 150-million litres becomes used oil, of which 120-million litres is collectable for recycling.

Considering that used oil is full of contaminants that are dangerous to the environment – with one litre capable of contaminating one million litres of water – this is a vast amount of contaminant that could make its way into our environment were it not for the efforts of the ROSE Foundation. The formation of the ROSE Foundation to drive used oil recycling was initiated in April 1994, after government withdrew support for the used oil re-refining industry.

Previously, lubricants were taxed to subsidise the re-refining of used oil back into lubricating oil. When this subsidy was removed, the major lubricant companies operating in South Africa took it upon themselves to help protect the environment.

ROSE CEO Bubele Nyiba says ROSE has been praised by the Department of Environment, Forestry and Fisheries as well as other industries for its successful model. This model has been recognised globally as best practice – and for being a leader in promoting and encouraging environmentally responsible management of used lubricating oils and related waste in South Africa. “Recycling used oil not only protects the environment, but also creates cost efficient products for our economy, which is exactly what sustainable recycling should achieve,” she says. Most used oil in South Africa is partially processed to remove certain impurities before being recycled into burner fuel, which is used in furnaces and boilers for the production of a range of products.

Processing reduces hazardous air emissions and the end product is cheaper than virgin furnace oil. Retrieving and recycling used oil has proved to be a lucrative enterprise.

About 1 300 staff members ranging from drivers, labourers and administrators, to operators and managers, are employed in the sector. The employment profile is predominantly male (85%) and African (64%).

ROSE describes the used oil recycling industry as a success story on many levels: Nyiba says the industry is sustainable in that it not only employs many people, but it also enables entrepreneurship. “All recycling models need to be sustainable and need to work towards a circular economy to be viable in the long term. ROSE has proved that recycling protects the environment, creates widespread employment opportunities and has a knock-on financial benefit for many.

“ROSE spearheaded EPR – an essential requirement in waste management – 25 years ago, long before it was a legal requirement in South Africa. The organisation is a case-study example of a successful EPR programme that was voluntarily implemented,” says Nyiba. ROSE chairperson Fabian Magerman says going forward, ROSE will continue to increase the volumes of used oil collected and recycled in South Africa to ensure a cleaner and safer environment for the next generation.

“We all share a common goal when it comes to saving our environment from oil contamination and winning the war in waste management. ROSE is building on our organisational capabilities to ensure our people meet the demands of the future and we are very excited about the ROSE journey ahead.” Magerman states that the single biggest challenge facing the used oil sector is, and will continue to be, legislation and how it will impact the industry.

He says it is imperative that ROSE works alongside government to ensure its help shapes legislation which will benefit all stakeholders in the oil industry. The foundation will continue to lobby key stakeholders who make up the value chain in used oil collection to follow our example. This must be done in conjunction with government. “With the reality being that one litre of used oil has the capacity to contaminate one million litres of water, coupled with the fact that oil can be recycled many times over, without losing its efficacy – there is an absolute necessity to responsibly collect and recycle used oil,” says Nyiba.

ROSE champions the petroleum industry’s ‘cradle to grave’ philosophy for used oil management and is confident of the success of ROSE’s future and looks forward to accounting for the collection of many more millions of litres of used oil, she concludes.