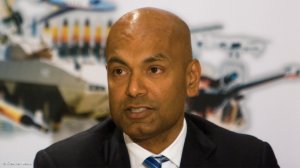 Financially-embattled State-owned defence industrial group Denel announced on Monday that Talib Sadik had been appointed as its interim CEO. This is the second time that Sadik, a chartered accountant (SA), has headed the group. He was Denel CEO from 2008 to 2012.

In its press release, the group stated that Sadik had been working with the Denel board in drawing up the turnaround plan for the entity. Consequently, affirmed the company, this “positions him well for a seamless transition”.

Meanwhile, the process to appoint a new permanent CEO was under way. Once a selection had been made, the name of the appointee would be made known to all stakeholders.

Board chairman (Ms) Monhla Hlahla assured all stakeholders, including employees, customers and suppliers, that the board was giving its top priority to the turnaround strategy. The aim was to establish Denel as a sustainable defence and advanced manufacturing business.

“The shareholder [government] and the board continue to find solutions to resolve the short-term challenges of the company,” further assured the group. “The board welcomes Mr Sadik into the interim role and looks forward to working with him on a successful outcome for Denel.”

The group also affirmed that its audit committee would remain properly constituted, in accordance with the Companies Act.