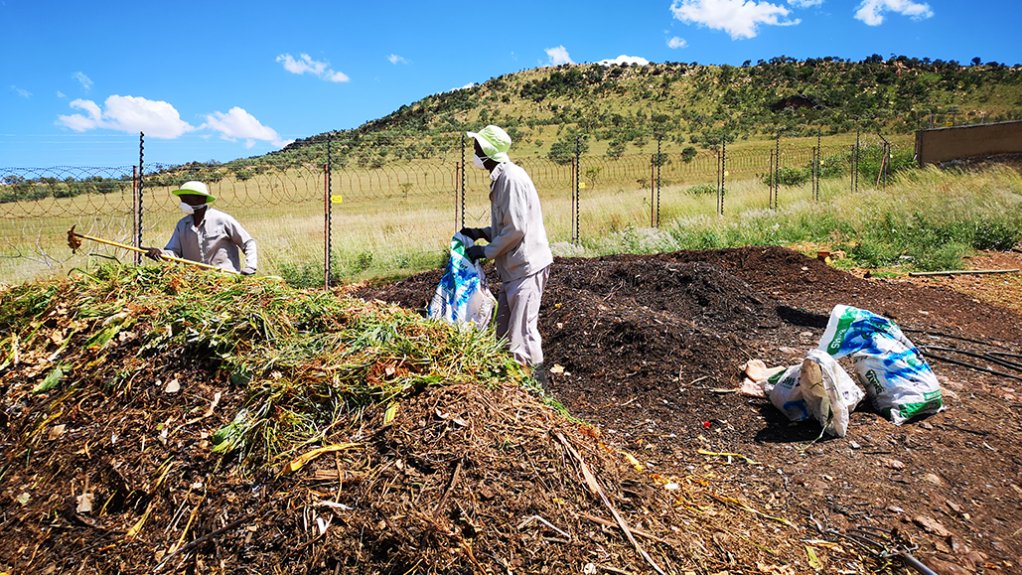 The company intended to start exporting the Gauteng-made product this year, but Covid-19 put a stop to its plans.

“We had booked a trip to New Orleans to attend the annual Waste Expo conference in August and aimed to open export division Bokashi Bran USA.”

The US market, particularly California, is advanced regarding source separation and the composting of food waste, but it is greatly challenged by odour and vermin, says Jones.

Traditional composting always suggests that cooked food, proteins and dairy be omitted as these attract pests and cause pathogens in the compost pile and, hence, bad odours. Therefore, frequent costly collections are necessary.

The bokashi made by the company is a wheaten-bran that has been brewed with trademarked effective-microorganisms (EM), which include yeast and lactic acid bacteria.

“These microbes ferment the food waste and stop the putrefaction process to enable its safe composting,” explains Jones.

“Food waste is considered the third-largest contributing factor to global warming when dumped at a landfill site, with each tonne emitting 627 kg of carbon dioxide-equivalent into our atmosphere, owing to the methane gas generated when food waste putrefies,” states Jones.

Pre-Covid-19 commercial kitchens were adopting the principle of diverting food waste from landfill, with the National Waste Minimisation Strategy having set a 50% ban on organics at landfill by 2022 and an outright ban from 2027.

Corporate accountability and sustainability were receiving significant attention up until March this year, highlights Jones.

She adds that many large national hotel chains had committed to the Bokashi Bran food-waste management system, which diverts bokashi-treated food waste to commercial composters in Johannesburg and Cape Town.

However, owing to the Covid-19 outbreak, the company lost 95% of its customers when the hospitality industry shut down.

“It’s been a difficult year for hospitality and the small companies that supply products and services to the industry. The awakening of the industry will be slow, especially with international travel still being restricted.”

Bokashi was originally developed in Japan in the late 1970s by Dr Teruo Higa, a professor at the University of the Ryukyus, in Okinawa. He was looking for alternative ways to produce high-quality agricultural products without using chemical fertilisers, artificial hormones or chemical pesticides.

Jones first started using bokashi ten years ago when she moved from Durban to Johannesburg.

“The mixture of microbes showed beneficial results with various applications and so the product developed and grew. For example, EM® is widely used in Japan as a sanitiser and disinfectant in hospital and in construction to stop cracking concrete. It has also shown exceptional results in water and soil rehabilitation. Thereby, our mines could rehabilitate land while they are still active and feed thousands of people a day.”

The Bokashi Bran manufacturing facility is based in Robertville Industrial Park, Roodepoort, while the company looks for larger premises.

“We need to increase production capacity. But, thanks to Covid-19, these plans may need to be pushed out owing to financial concerns,” says Jones.

It takes the company four months to produce and package its bokashi, following strict manufacturing processes to ensure the highest quality product is achieved.

“Pan Mixers South Africa supplied us with a mixing machine that enables us to mix 60 kg of bokashi in about ten minutes, reducing the mixing time from four hours. The bokashi is then placed in a brewing room, before it is dried for packing,” states Jones.

Normally, the manufacturing of the bokashi is undertaken by a four-person team, which use proudly South African microbes following technology developed by Dr Higa.

“Thankfully, before lockdown, we stocked up on EM and are hoping to ramp up to full production capacity by August.”

The company can produce 5 t of bokashi a month in summer, with the production process a little slower in the winter months owing to the lower temperatures, and intends to double production by next year.

Jones emphasises that there is a compelling business case for reducing food waste which includes financial, environmental and social factors.

“The adoption of the Bokashi Bran system starts the process of identifying why so much food is wasted and the solutions to reduce that waste, while simultaneously benefitting our soils,” she concludes.