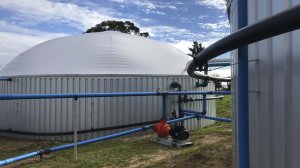 These solutions are provided for companies that produce organic waste, such as those active in the food processing and hospitality industries, where the waste is used for biogas production.

Biogas is produced from the anaerobic digestion of organic substances in organic waste. Anaerobic digestion is a sequence of biological processes caused by various micro-organisms in an oxygen-free environment.

The company is developing biogas plants for three different projects in the agroprocessing industry. This includes designing and constructing a biogas plant for a dairy farm, as well as piggeries. Discarded organic waste from the farms will be used as feedstock for a biodigester to produce biogas that can be used to generate electrical and heat energy.

All these projects are in the final stages of negotiation and are based in the Western Cape.

Feasibility studies have been completed for all three projects and they are in the funding phase. Financial close is likely within the next two months, with construction to start thereafter.

The plant for the dairy farm will be a 250 kW electric power application.

“There is a lot of demand for electricity solutions, as it is a simple energy setup, but our focus is slowly moving to providing an organic waste management solution, with organisations considering these solutions, but it’s about securing funding to implement them,” he explains.

Thomson highlights how these projects crucially follow up on the completed construction of a biogas demonstration plant – designed to display the potential for biogas in South Africa, as it was specifically developed for application in Africa – in August last year.

The project was a R1.2-million investment in the development of a plant on a cucumber, tomato and herb farm in the Western Cape. The plant is producing biogas for the generation of electricity.

“There has been a favourable response to the plant. Demonstrating a fully functional biogas plant has created the necessary confidence in the technology,” stresses Thomson.

He also mentions that the success of the vegetable farm project played a significant role in the subsequent plants for the dairy farms and piggeries, as the same technology and processes will be used on a larger scale.

The biogas plant for the vegetable farm is also significant in that it forms the basis of the company’s marketing efforts in terms of establishing credibility and confidence in the use of biogas.

Thomson reiterates the importance of establishing credibility for biogas technology in these and future projects, particularly amid an underdeveloped biogas industry in South Africa.

Thomson argues that, while less than 1% of the biogas potential in South Africa has been realised, there remains a positive outlook for the future of the industry.

He highlights the Western Cape in this regard, as the provincial government has placed an imminent 100% ban on organic waste to landfill by 2027.

This change in legislation provides an ideal opportunity for the biogas industry to develop, as biogas is an ideal technology to treat wet organic wastes, enthuses Thomson.

Moreover, Global Energy uses a large amount of locally produced equipment in its processes, which has enabled the company to reduce its capital costs significantly, particularly as importing equipment from Europe remains costly.

The company has also developed its own research laboratory for testing substrates, significantly reducing the cost of completing feasibility studies.

The company started doing its own testwork last year to accelerate the rate of testing, says Thomson. While it is not an accredited laboratory yet, he notes that it is sufficient for the company’s activities.

Thomson emphasises the importance of the use of this laboratory for its own testwork, as research and development is an ongoing activity for Global Energy. The company also engages with local universities regarding research and academic initiatives wherever possible.

“The company’s goal is to become the leading supplier of biogas plants smaller than 1 MW,” he concludes.