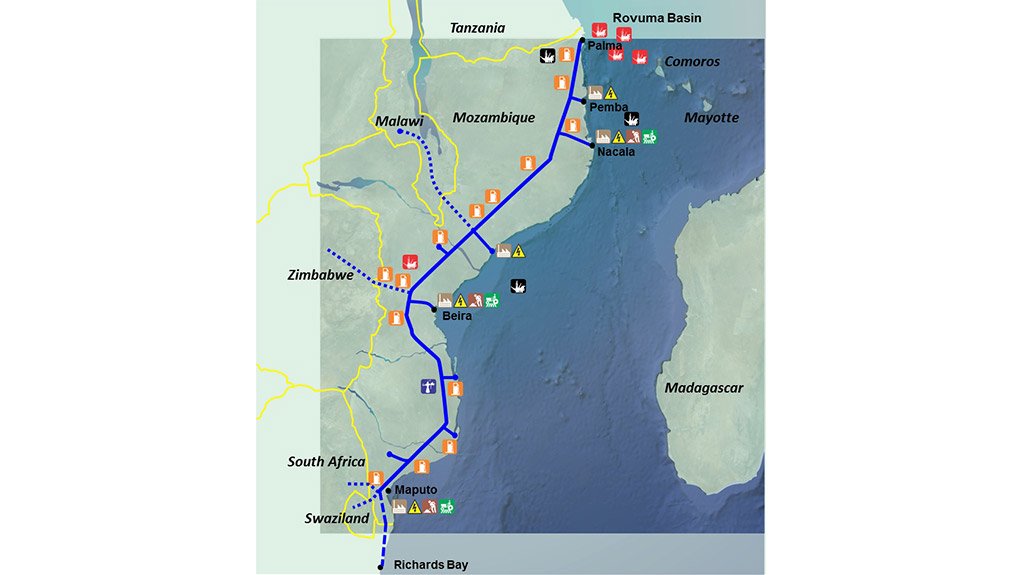 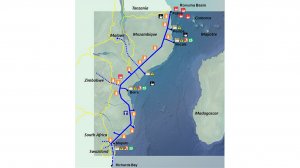 A feasibility study is currently under way for the construction of a $5-billion 2 600 km natural gas pipeline that could connect significant natural gas discoveries in northern Mozambique to benefit gas-to-power markets in Southern Africa.

Having concluded a prefeasibility study in December last year, clean energy project developer Gigajoule International presented its findings to the Mozambique government in January, after which a memorandum of understanding (MoU) was signed in April with Mozambique State-owned oil and gas company Empresa Nacional de Hidrocarbonetos (ENH).

The MoU laid the foundation for a joint study to examine the feasibility of the pipeline, dubbed Gasoduto do Norte ao Sul de Moçambique, or Gasnosu, that could run from Cabo Delgado to Maputo and to regional markets further south, possibly including Richards Bay, in South Africa.

Prior to that, Gigajoule spent 18 months evaluating the economic and technical feasibility of a project aimed at supplying liquefied natural gas (LNG) to major gas markets in Mozambique.

Subsequently, several Mozambique stakeholders requested Gigajoule to study the feasibility of a large-diameter north-to-south gas pipeline that could link more markets than an LNG project would.

Gigajoule MD Johan de Vos tells Engineering News that the latter option proved to be the most economically feasible way of monetising the abundance of gas that northern Mozambique’s Rovuma basin has to offer, provided that large offtake customers are secured.

While the Rovuma basin contains more than 150-trillion cubic feet (tcf) of proven natural gas reserves, Gigajoule calculated that, if 400-million gigajoules a year is distributed to energy-needy regions south of Maputo, including South Africa, for 30 years, less than 10 tcf of the Rovuma discovery would be needed.

Currently, most of the gas that will be extracted from the Rovuma basin is destined for Asian LNG markets, though there remains an oversupply in the region that could cater to Africa-based projects.

“We estimated that Mozambique would need to dedicate less than 7% of its already proven gas reserves to make a project like this economically feasible,” says De Vos, adding that Gasnosu will only take three years to construct – a significant turnaround time when compared with alternative energy generation projects such as coal-fired or nuclear power stations.

If approved by government, construction on Gasnosu will begin in 2016 and is, therefore, expected to be operational by 2018.

Gigajoule and ENH’s partnership started in 2003 when they formed the Matola Gas Company (MGC), of which Gigajoule is a 49.6% shareholder. With the concession rights to transport and distribute natural gas in the Maputo province, MGC developed the gas transmission and distribution network from Ressano Garcia to Matola.

Construction of this network started in June 2004 and was completed by March 2005 – ahead of schedule and within budget.

Having been in operation for almost a decade now, MGC is supplying gas to more than 30 industries, including gas- powered vehicles and two power stations across the Maputo province. The company currently sells and transports 99% of all natural gas used in Mozambique.

This formed the platform from which Gigajoule expanded into other natural gas-related projects in Southern Africa, such as temporary power solutions provider Aggreko’s cross-border interim power project, based at Gigawatt Park, in Ressano Garcia.

Gigajoule is also co-developer in a permanent 100 MW gas-fired power station at Ressano Garcia, which is scheduled for commissioning in 2015.

De Vos tells Engineering News that, through these projects, Gigajoule and its partners have proven that gas-to-power is a competi- tive sector that can provide major benefits for the Southern African region.

He reiterates that a large-diameter pipeline connecting gas discoveries in the Rovuma basin with the energy needs of the south can have a dramatic impact on the economy of Mozambique and its neighbours.

Adequate volumes of clean natural gas, delivered to critical areas, can alleviate major current and future power shortages in the region, with minimum impact on the environment.

Moreover, Mozambican communities along the pipeline route will benefit by having gas available for public and agri- cultural transport and power generation.

While the cost of the pipeline project is estimated to be about $5-billion, about $5-million will be spent on the detailed feasibility study, which should be ready for presentation by February 2014.

With extensive expertise in gas pipeline design and construction, VGI was appointed to assist with the route engineering and pipe design and sizing, while Econex is conducting a socioeconomic-impact assessment to determine the effect the gas pipeline will have on Mozambique and South Africa.

De Vos expects the socioeconomic-impact study to be concluded this month, after which it will be presented to the governments of South Africa and Mozambique.