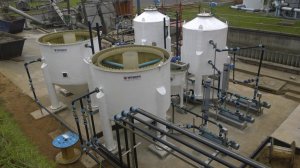 ANAEROBIC DIGESTION PILOT The trial project, which was commissioned and optimised by Veolia, aims to generate biogas from the current waste water feeds at the plant

Resource management company Veolia Water Technologies completed the installation of an anaerobic digestion pilot plant, which was erected at eThekwini Water & Sanitation’s Southern Wastewater Treatment Plant in Merebank, Durban, in the first quarter of this year.

The trial project, which was commissioned and optimised by Veolia, aims to generate biogas from the current wastewater feeds at the plant. Veolia has noted that the pilot trial is designed to test the digestibility of the domestic and industrial waste received by the plant.

However, varying waste com- position and feed rates and pilot- ing quality-specific treatment processes were required to confirm the efficacy of the anaerobic digestion process.

The Modderfontein-based company’s work completed for the eThekwini municipality included the supply, construction and commissioning of flow tanks, primary settling tanks, thickeners and digesters, as well as suction and delivery pipework, pumps, electrical power and control instrumentation for the digestion plant.

Further Veolia was also responsible for the mechanical and electrical design of the plant.

“Once in operation, Veolia will implement a one-year operations and maintenance contract during which time [the company] will work with research students from the Pollution Research Group, at the University of KwaZulu-Natal who will gradually assume the operation of the pilot plant,” the company adds.

It has been noted that raw domestic and industrial sewage extracted for three sewers, which include the Chatsworth, Badulla and Jacobs lines feeding the municipal wastewater treatment plant, is stored in three flow tanks, one tank for each inlet line, at a continuous flow rate of about 14 m³/h. From these flow tanks, 200 m3/d of raw sewage will be pumped to two primary settle-ment tanks in proportion to the flow rate of the sewer feeding the tank.

“The primary settlement tanks form the starting point of a two-train treatment process,” the company states.

Subsequently, raw sewage extracted from the Chatsworth sewer will feed train one, while the Jacobs and Badulla sewers will provide the feed for the second process train. Underflow from the primary settlement tanks will be transferred to thickeners, with each one receiving about 2.5 m3/d in intermittent feeds. Settled sludge from the thickener underflow will periodically be drawn off and fed into the 10 m3 digesters. The biogas generated during this digestion phase will pass through a flow meter, a gas ana-lyser and a flame arrestor before being blown off into the atmos- phere.

Veolia notes that the success of the pilot trial will be measured by the effective generation of this biogas through the anaerobic digestion relative to the waste-water feed flow rate from the different sources.