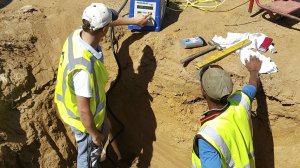 Plastic pipes specialist Marley Pipe Systems has throughout 2015 and in 2016 supplied high-density polyethylene (HDPE) Megatuff pipes that are suitable for electrofusion in sewage system upgrades throughout South Africa.

“The HDPE Megatuff pipes being suitable for electrofusion welding means that no ridge or internal bead is formed during the welding process. “With traditional pipe butt welding, the joint where the pipes meet usually forms an internal bead that has to be shaved off [through a bead cutting process which is time-consuming],” explains Marley Pipe Systems products specialist Faize Gafoor.

He points out that sewage lines are especially influenced by this, as floating solids, or particles thereof, can get lodged on the protruding pieces of plastic formed by a ridge, or internal bead. The electrofusion technique provides a smooth surface at the joints, thereby preventing any particles from lodging in the pipes.

He adds that the pipes, combined with the electrofusion technique, can provide sewerage lines at a more affordable rate, as the welding system is easy to understand and the machine is designed for anyone to learn and understand how to weld the pipes.

The flexibility of HDPE pipes has also been demonstrated at the Drakenstein and Hammanskraal projects, where both butt welding and electrofusion welding has been used.

“The underground water level is high in the Drakenstein area which has caused plastic pipes to “float” out of the ground in the past, he adds. The pipes stretch when it rains and do not crack under pressure,” he explains.

Gafoor says that the Hammanskraal project involves replacing existing asbestos pipe, which will be reamed out and slip lined with HDPE Megatuff pipe. Because the pipes are being slip lined, it serves as a demonstration of the impact resistance that HDPE Megatuff pipes can handle.

“With the water problem in Randfontein, in Gauteng – where groundwater is mixing with mine water and spilling into rivers – solutions like the Megatuff pipe system should be able to help clean the water,” he elaborates.

“If more people are aware of the advantages that HDPE and Megatuff pipes provide, it will become easier to upgrade old infrastructure and install new pipes,” Gafoor concludes.

Marley Pipe Systems offers an extensive range of polyethylene electrofusion fittings for pressurised gas and water pipelines in civil and industrial applications. Manufactured on the principles of total quality, absolute safety and respect for the environment, Marley Pipe delivers products that offer the highest level of safety and reliability to exceed customer expectations.

Electrofusion welding systems are now considered the most highly developed and safe method for joining polyethylene pipes. Thanks to its versatility, electrofusion can be used to weld together pipes or fittings from different polyethylene materials and different thicknesses as long as there is compatibility of melt flow index and raw material density.