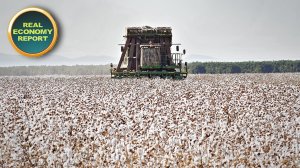 Clothing retailer Edcon increased its order for cotton lint to 2 200 t for the next year as part of its commitment to the clothing and textile industry, supporting the industry target of producing 60 000 t of cotton lint by 2020. Marleny Arnoldi tells us more.

The clothing industry in South Africa hit all-time production lows of only 5 000 t in 2013, which consequently had the country import 95% of its 315 000 t/y of cotton lint needs. The industry had since increased production to the current rate of 50 000 t/y of cotton lint, largely thanks to R200-million funding support from the Department of Trade and Industry between 2015 and 2019.

Loskop Cotton CEO Joseph Kempen says that currently most of South Africa’s cotton is beneficiated (weaved and spinned) outside of the country. If South Africa were to increase the local beneficiation of cotton to a level where import substitution of 50% is possible on four retail items – t-shirts, towels, chinos and underwear – then the industry could create 75 000 new jobs and inject R10-billion into the economy.

Kempen tells us more about the industry that was once the second-largest employer in South Africa.

Government contributions so far included upgrades to Loskop Cotton ginnery, outside Marble Hall in Limpopo, as well as investments into 11 cotton strippers and 24 cotton pickers. A cotton picking machine costs around R12-million, but harvests between 15 ha to 20 ha a day.

Kempen says a farmer needs at least 1 000 ha of cotton fields under irrigation to make the capital investment into the machine viable, therefore farmers often consolidate to purchase one machine to work on their respective farms.

He further says that the Loskop ginnery has the capacity to gin 45 bales of cotton per hour, with one such bale weighing around 2 200 kg.

With retailers such as Edcon supporting the Sustainable Cotton Cluster, an industry-initiative that was created alongside government’s investment - it ensures the increased use of local materials to manufacture clothing in South Africa.