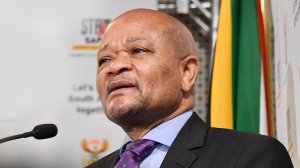 As the Department of Water and Sanitation (DWS) tables its budget for the next three financial years, Minister Senzo Mchunu has committed to ensuring that the department manages its significant budgets responsibly and effectively.

On May 13, Mchunu tabled a combined budget of R111.25-billion for the DWS and the Water Trading Entity over the medium-term expenditure framework (MTEF).

The Water Trading Entity, which largely relies on revenues from the sale of water, augments its budget for the development and management of national water resource infrastructure with a MTEF allocation of R9.55-billion.

Direct municipal debt to the department amounted to R8-billion.

“It is critical that government as a whole, addresses the problem of poor revenue management and debts in the water sector. If this problem is not addressed, we will not see a sustainable improvement in water and sanitation services,” he warned, noting that the DWS is working with National Treasury, the Department of Cooperative Governance and Traditional Affairs and the South African Local Government Association on solutions to this issue.

“The underlying problem that we all need to focus on is weak billing and revenue collection at municipal level.”

Mchunu assured that the department had strengthened expenditure management and compliance enforcement to minimise unauthorised, irregular, fruitless and wasteful expenditure, an effort which resulted in no new unauthorised expenditure incurred in the 2021/22 financial year.

“Irregular expenditure which is still appearing in the department’s audit reports relates mainly to contractual obligations from prior periods, which have a carry-through effect on current running contracts,” he explained.

Further, the DWS has requested the CFO to prepare an action plan towards the department achieving a clean audit.

Historically, the DWS has underspent on its allocated budget, particularly the budget allocated for infrastructure projects.

“This is unacceptable in the context of the water and sanitation challenges facing the country, and we have requested the director-general and CFO to focus on addressing this in the current financial year,” Mchunu commented, adding that the director-general has indicated that he and the CFO are instituting improved project management, infrastructure procurement and delivery management and expenditure management systems and processes in the department to address this.

Speaking during his Budget Vote on Friday, he said that the designs on the R25-billion Mzimvubu water project, in the Eastern Cape, which is expected to provide water for 750 000 people, are 80% complete and the first-round of fundraising started in January 2022 through a Request for Information, which is currently being evaluated.

In the Free State, the R10-billion project to build a major pipeline from the Xhariep Dam to augment water supply in Mangaung is in the feasibility stage and is expected to be completed by 2028.

Meanwhile, 14% of the budget for the R36-billion Phase 2 Lesotho Highlands Water Project, which is due to start delivering water to Gauteng in November 2027, has been spent.

In KwaZulu-Natal, the R800-million project to raise of the dam wall at Hazelmere Dam to ensure long term water supply to Ethekwini is 96% complete and is due for completion in the third quarter of 2022, while the R23-billion uMkhomazi water project, which also aims to deliver long term additional water to the region by 2028, is at the prefunding stage, with construction to start in 2025.

The R24-billion Olifants River water resources development project, which was launched on May 9, will be implemented as a public private collaboration with mining companies to fast-track water delivery to communities and mines in the Sekhukhune and Mokgalakwena municipalities in Limpopo by 2028.

Government and the mining companies will each fund approximately 50% of the project, which will be implemented by the transformed Lebalelo Water Users Association. The project is at approval stage with some of the work packages at pre-construction stage and construction is anticipated to begin by late 2022.

In addition, the R1.2-billion Thembisile-Loskop bulk water supply project in Mpumalanga, which is aimed at addressing water supply challenges in the Thembisile Hani Local Municipality and will provide 23 Mℓ of water to communities in the Mpumalanga and Limpopo provinces, is at procurement stage and will be implemented over a three-year period from May 2022 to April 2025.

Phase 1 of the Vaal Gamagara Water Supply Scheme, in the Northern Cape, is 96% complete at a cost of R1.4-billion, with Phase 2 starting later this year at an estimated cost of R10-billion.

“We recently commissioned the Moretele South Pipeline, in the North West, a 60 km pipe which will be operated and maintained by Magalies Water and which will be of benefit to the following villages in the Moretele Local Municipality, namely: Carousel View, Dertig, Bosplaas, Mathibestad and Makapanstad, to name a few,” he said.

“To increase water security in the west coast area of Cederberg in the Western Cape, we have resumed construction work to raise the wall of Clanwilliam Dam at a cost of R3.2-billion.”

The advance infrastructure is complete and work on the dam wall is starting this month. It is due to be completed in late 2026.

In addition, the department is implementing the R21-million Brandvlei Dam project in the Western Cape, which involves the construction of a feeder canal to provide an additional 33 Mℓ of water for storage in the dam.

Construction progress is at 20% with an anticipated completion date of October 2022.