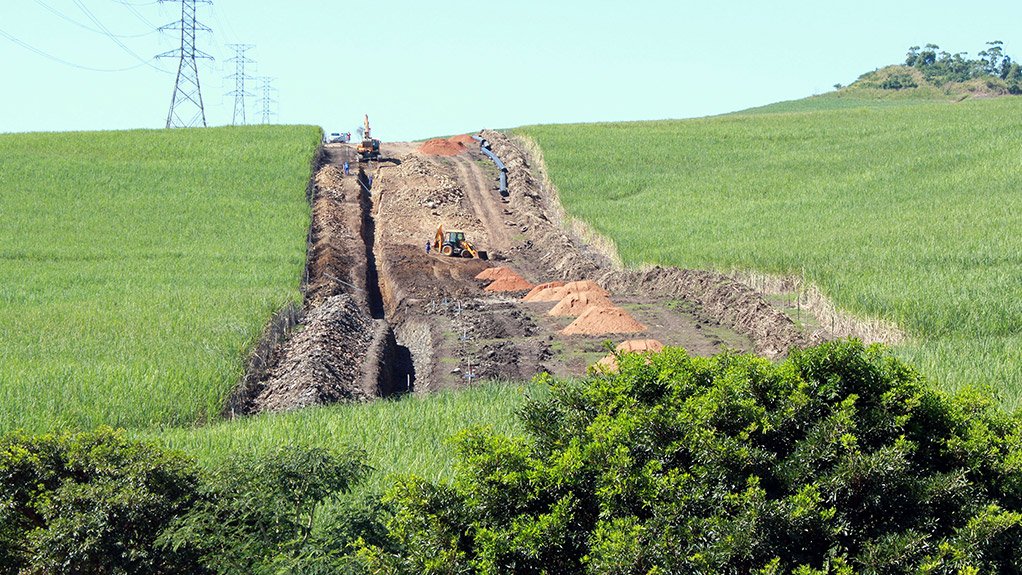 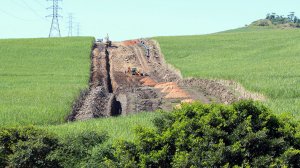 Municipal water and sanitation services eThekwini Water and Sanitation (EWS) says construction of the Northern Aqueduct Augmentation, which forms part of the eThekwini strategic master plan to deal with the increasing demand for water in the northern regions of Durban, in KwaZulu-Natal, is still on track to be completed in 2017.

Meanwhile, awarding the tender for the construction of the Blackburn reservoir, which is essential for further development in the Cornubia integrated development, north of Durban, is imminent, EWS head Neil Macleod says.

The Northern Aqueduct Augmentation project comprises four phases. The first phase, which started in March, will consist of 18-m-long steel pipes, ranging from 1 200 mm to 700 mm in diameter. The pipes will link the existing reservoirs in Phoenix to the existing reservoirs, in Umhlanga and Waterloo, with a feed to the new Blackburn reservoir. The phase comprises 22 km of pipeline and is valued at R150-million and is scheduled for completion in the third quarter of 2015.

The second phase from Durban Heights Reservoir to Duffs Road is a 1 200 mm steel pipeline over an approximate distance of 15 km. Construction of Phase 2 is programmed to start in the fourth quarter of 2015.

Phase 3 will involve the construction of the 1 200-mm-diameter pipeline between the town of Emachobeni and the Phoenix 2 reservoir, and will close the link between the current Western Aqueduct pipeline project and the northern-most portions of the eThekwini water supply network. Construction of Phase 3 is programmed to start in the fourth quarter of 2015.

Phase 4 will comprise pipe construction from the town of Ntuzuma to the town of Ogunjini. This entails the laying of 600-mm- and 300-mm-diameter pipes that amounts to 22 km of pipeline, the construction of a ten-million-litre capacity reservoir and a booster pumpstation, all of which are in the Ntanda region.  Construction of this phase is programmed to start in the third quarter of 2015.

Meeting Current Demand
The existing Northern Aqueduct and the network of bulk supply lines serve the EWS area of supply to the north of the Umgeni river, to the south of the Ohlanga river and to the east of Ntuzuma.

The aqueduct conveys potable water from Durban Heights Waterworks to several terminal reservoirs in the system. These, in turn, supply water to residents and businesses, according to the EWS.

However, the current Northern Aqueduct has reached capacity on various sections of the trunk mains, owing to growth in demand, Macleod points out.

“Although EWS has enough water to meet the current demand, it does not have the infrastructure or network capacity to deliver the water to where it is needed,” Macleod says, adding that water shortages could potentially delay further development at the Dube TradePort and Cornubia developments, both north of Durban.

“Therefore, this project will begin to put urgently needed bulk water infrastructure in place for the rapidly developing northern areas of Durban.”

Cornubia is regarded as Durban and KwaZulu-Natal’s largest sustainable integrated human settlement initiative, according to the Human Settlements Infrastructure Committee.

Once completed, Cornubia will be a 1 300 ha, multibillion-rand development that will incorporate industrial, commercial, residential and open-space use, the report indicates.

Water-Sourcing Challenges
Although the Northern Aqueduct and Durban’s largest pipeline project, the Western Aqueduct project, estimated for completion in 2017, are expected to meet demand for the next 30 years, Macleod notes that an additional source of water will have to be found to inject additional water into this bulk distribution network.

“With the democratisation of South Africa, the operational area of eThekwini municipality increased dramatically and the population growth rate remains well above the national average,” he says.

Durban currently has sufficient water to meet demand, as high rainfall and the recent completion of the Springrove dam, near Mooi river, have ensured short-term supply. Macleod notes, however, that the supply position will return to a deficit situation in 2015.

“To meet the expected growth in water demand, several capital projects are being considered, such as desalination, reusing treated effluent and constructing a new dam on the Umkomazi river,” he concludes.