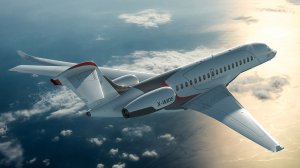 “[W]e are introducing a new benchmark in business aviation,” affirmed Dassault chairperson and CEO Eric Trappier. “The Falcon 10X will offer an unrivalled passenger experience over both short- and long-duration flights, along with breakthrough safety features from Dassault’s frontline fighter technology. We have optimised every aspect of this aircraft with the passenger in mind and established a new level of capability for ultra-long-range aircraft.”

Scheduled to enter service at the end of 2025, the FalconX will have the biggest cabin in the purpose-built business jet market, being 2.03 m high and 2.77 m wide. This will be some 5 cm higher and 20 cm wider than the biggest cabin now available in the purpose-built business jet category. Flying at 41 000 ft (almost 12 497 m), the cabin will be pressurised at 3 000 ft (just over 914 m), which Dassault says will be the best pressurisation in the market.

It will have a top speed of Mach 0.925. (Mach 1.0 being the speed of sound; in km/h terms the speed of sound varies with altitude while the ‘Mach number’ is independent of altitude.) Its range will be 7 500 nautical miles, which would allow it to fly nonstop from Paris to Santiago (Chile) or from New York to Shanghai, or from Los Angeles to Sydney, for example.

The design of its wings has been optimised for high-speed flight, and they will be manufactured from carbon fibre composites, reducing weight, reducing drag and maximising strength. For low-speed flight, such as landing approach, the wing will be fitted with retractable advanced high-lift devices. The flight deck will have touch screens throughout the cockpit, with everything arranged intuitively. The Digital Flight Control System (DFCS) will be next-generation, directly based on Dassault’s latest military technology. A single ‘smart throttle’ will control both of the aircraft’s engines, through the DFCS.

The aircraft will be powered by a new version of Rolls-Royce’s Pearl engine family, the Pearl 10X, developed specifically for the Falcon 10X. The Pearl 10X has been developed and will be manufactured by Rolls-Royce Deutschland. It is currently undergoing a thorough test programme at the Rolls-Royce Centre for Excellence for Business Aviation Engines, at Dahlewitz, in Germany. It is the most powerful member of the Pearl family, and will be 5% more efficient than Rolls-Royce’s previous generation of business jet engines. It includes innovative technologies developed under the company’s Advance2 programme and employs 3D printing (more formally called additive manufacturing) to produce key components.

“We are extremely proud that Dassault has chosen us to power their flagship Falcon 10X, and I would like to congratulate the Dassault family as well as the Falcon team on this special occasion,” highlighted Rolls-Royce civil aerospace president Chris Cholerton. “[Thursday] marks the start of a successful partnership and, with our pioneering Pearl 10X engine and leading customer service, I look forward to supporting Dassault as they continue to impress their customers in the ultra-long-range corporate jet market.”

“The [Falcon] 10X will be more than just another big step forward in business aviation,” assured Trappier. “It will be absolutely the best business jet available in the ultra-long-range category, and will remain so for a long time.”