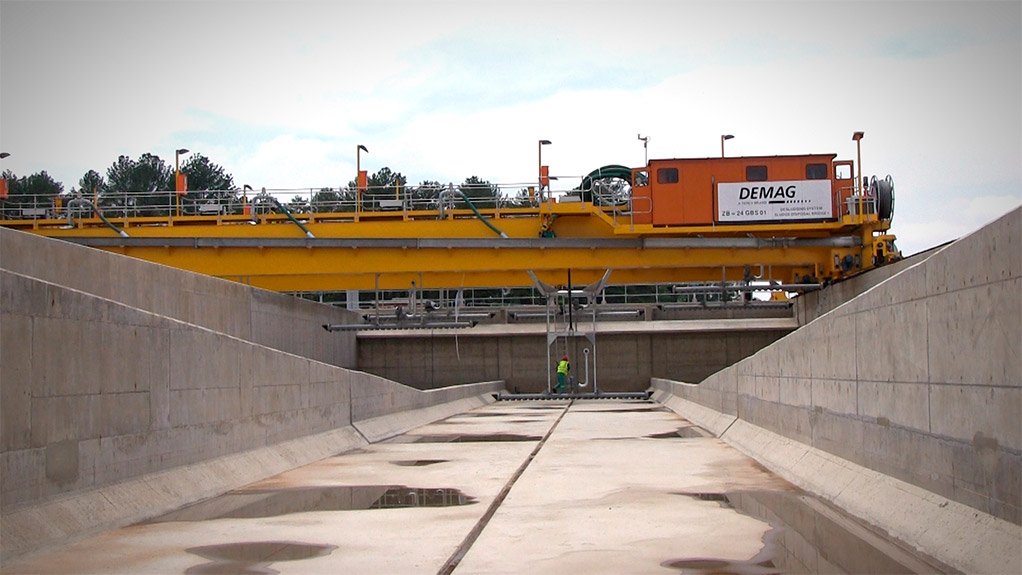 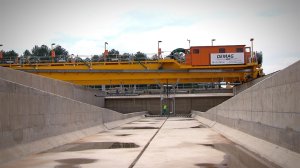 ONE OF A KIND Demag was contracted by Rand Water to design, manufacture and install two water-desludging bridge cranes for the Zuikerbosch pumpstation

He explains that, prior to the project for Rand Water, Demag was usually contracted by the steel industry and had never designed anything for the water industry. As a result, the Rand Water project was educational for the company, as it enabled Demag to venture into new areas of expertise.

The crane system installed at the Vaal river catchment area scours 10 000 m2 of the river bed to remove the sludge layer. Two-hundred-million litres of water flows through the system daily, with 16-million litres of that being sludge, which is pumped out by the bridges.

“Demag’s machinery forms an integral part of the process of converting water from the Vaal dam and river into potable water, as flocculators mix incoming water with flocculent that attracts suspended solids. A resultant sludge then settles at the bottom of the tank,” he says.

Each desludging bridge crane, a combination of Demag’s crane technology and Rand Water’s water desludging technology, spans 40 m and is fitted with six pantograph hoists to guide the pumps to sludge level. The bridges move at 0.7 m a minute during automatic operation and 20 m a minute during the transfer operation. The pumping capacity of each bridge is eight-million litres a day.

“To reduce risk, as failure of the system might result in filter blockage, the desludging bridges are fully automated and communicate with the Rand Water control room continuously, thereby ensuring a smooth and seamless operation at all times,” highlights Andeweg.

He explains that Demag overcame several challenges in executing the delivery of the cranes, adding that this new experience gives the company an edge over its competitors.

“The project required extra engineering efforts to ensure first-time success. We also faced logistical challenges, as the 40-m-long and 8-m-wide cranes each weigh 60 t. We partnered with a trusted transport company to help solve the problem,” says Andeweg.

He mentions that, as most of the crane system’s components were manufactured in South Africa and the company worked with local contractors, the project also added skills and expertise to the local market. The project has an 80% local content offering.

Demag worked on the project for 21 months, including delivery of all components on site. Installation of the cranes is complete and the estimated commissioning date for the project is June, once power has been installed at the site.

“To facilitate the handover, Demag’s dedicated service team will train Rand Water personnel in the operation and basic maintenance of the machinery,” adds Andeweg.

The operational life span of the bridge is 20 years.