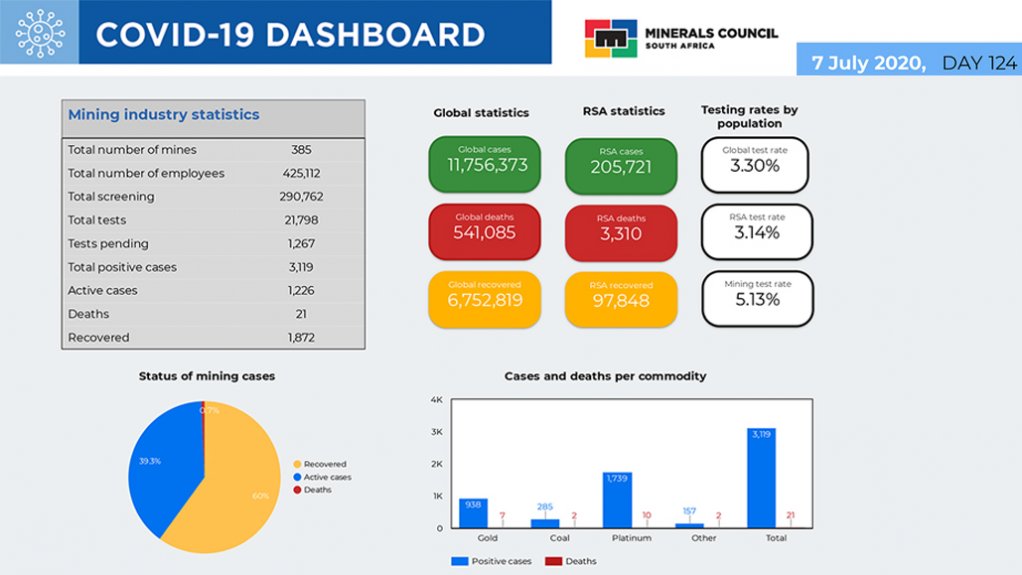 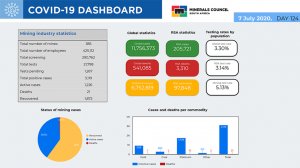 JOHANNESBURG (miningweekly.com) – The Covid-19 death toll in the mining industry has risen to 21, Minerals Council South Africa recorded on its website on Tuesday, with the number of Covid-positive cases totalling 3 119.

Platinum mining, which employs the most people, continues to have the highest number of Covid deaths so far at 10, followed by gold mining with seven deaths, coal with two deaths and unstated sectors with another two deaths.

The deaths per positive cases is many times lower than the global ratio.

North West province continues to be the area where most of the mining industry’s Covid fatalities are occurring. Deaths in North West totalled 11, followed by Gauteng with six, Mpumalanga three and Limpopo one.

The recovery rate is 60% among mineworkers. More than 1 872 mineworkers have recovered, with nearly 22 000 tests undertaken and more than 290 000 mineworkers screened.

By last Thursday, a total of 287 297 employees had returned to work, representing 68% of the total workforce of 425 112 employees. As reported by Mining Weekly, not a single foreign mineworker had returned by last Thursday and an update on foreign worker return is expected this Thursday.

Although all mine employees are screened daily before going on shift, most of the asymptomatic cases would not have been detected through screening alone and their detection is the result of mining’s high testing rate.