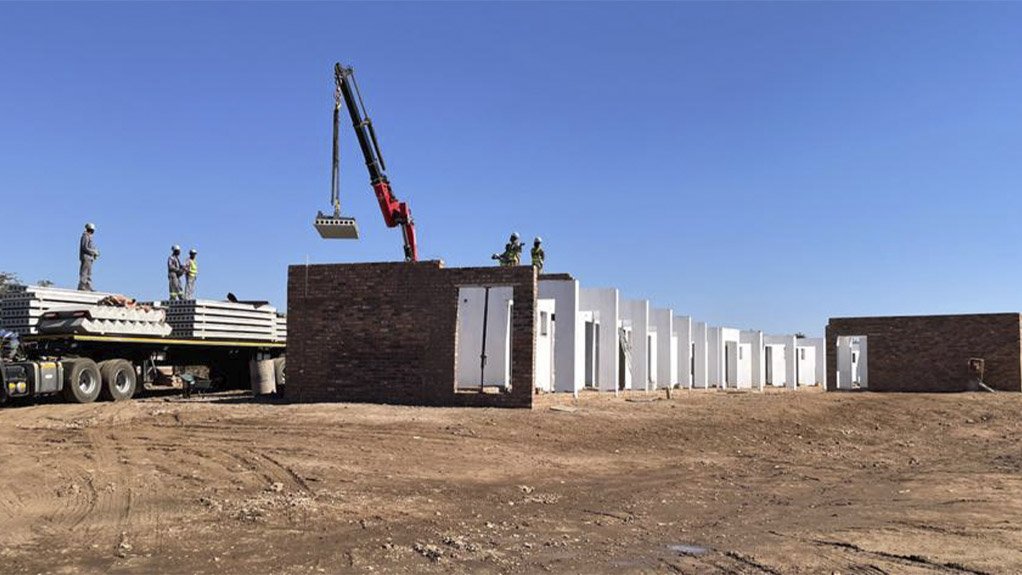 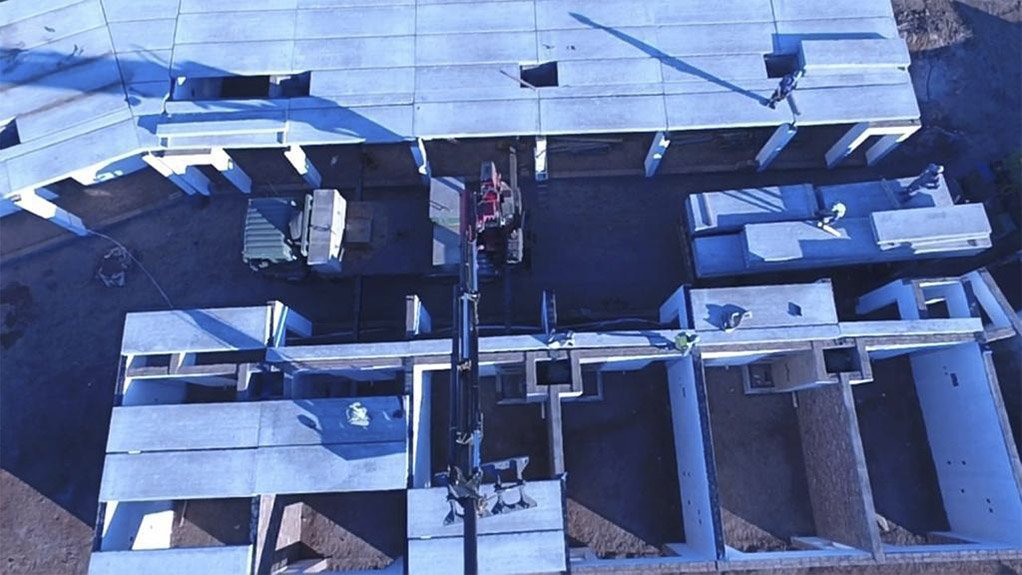 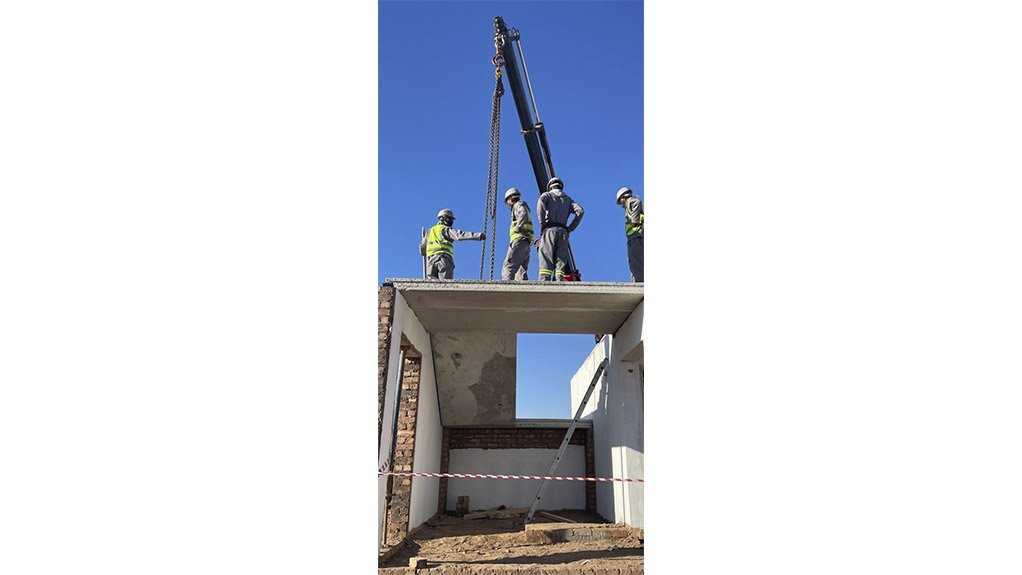 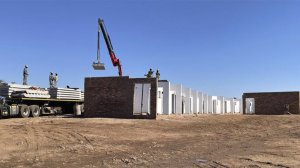 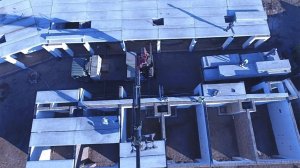 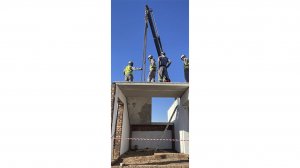 A new development that will provide accommodation for a large international contracting team that has been appointed to work on an industrial project in Limpopo is progressing ahead of schedule. This is only two months after the building contractor, Projects 2000, broke ground on this R32-million building project.

The impressive progress made in such a short timeframe bears testament to the vast skills and experience of the entire professional team, which also includes Cosmoplan Architects & Industrial Designers; Fanoy Consulting, the consulting engineer; MVM Africa Electrical Engineers and Quanto 2000, the quantity surveyor. This is in addition to specialist sub-contractor, Coreslab, which manufactured and installed the many hollowcore slabs that make up the floor space of this development, which includes two sleeper blocks and a lodge.

The company’s suspended slab solution played a critical part in helping the contractor to significantly accelerate the works programme.

A total 1 170m2 of hollowcore slabs were installed by Coreslab in only four days. This enabled the contractor to commence fitting out the rooms below and with the brick work above almost immediately after they were installed.

The hollowcore slabs are manufactured to the highest quality and cut-to-size at Coreslab’s factory. They are then transported to site where they are positioned onto the load-bearing walls and grouted into place according to the building plan. This is before they are covered with either a 30mm topping or 50mm structural screed, depending on the engineer’s requirements. Core-drilling is then undertaken to create voids for the electrical services to complete the installation.

The contractor would have never achieved this impressive production rate if it had used conventional cast-in-place methods to construct the floor slabs. This is considering that it takes up to 28 days for concrete to cure before the shutters can be stripped so that work can commence above and below the slab.

The use of hollowcore slabs also did away with the need to install tons of support and scaffolding in preparation of the concrete pours for traditional in-situ slab construction. Extensive propping underneath the slab also restricts trades from working below on a conventional building project.

Moreover, the solution eliminated the need to coordinate a large team of rebar and shutter hands, as well as the delivery of construction materials to a very remote worksite. Rather, Coreslab’s hollowcore slabs are manufactured in a controlled factory setting that is far removed from the many variables on a construction site. They are dispatched to site on a just-in-time basis and lifted directly from the truck trailers using one of Coreslab’s mobile cranes. This also frees up available space on building sites.

Alternatively, the contractor could have batched and pumped its own concrete on site. However, this would have possibly delayed the project, considering the need to introduce extra quality control measures. For this reason, Projects 2000 decided to also rule out the use of rib-and-block systems to construct the suspended concrete slabs. Projects 2000 would have had to install this system itself. By delegating the construction of the suspended slabs to a specialist in the field, potential errors were mitigated to ensure a finish of the highest quality the first-time round.

The use of hollowcore slabs also provided a safer solution by doing away with the need to work at heights on scaffolding. The precast concrete elements are manufactured at ground level in the factory and installed on site by a small team of skilled and experienced workers. This includes a foreman, surveyor, rigger and crane operator. Notably, there has not been a single lost time injury on this project – in line with the mine’s own strict occupational health and safety protocol.

Coreslab undertook its first site visit on 2 June 2021 when Projects 2000 was still at foundation level for the three structures. By 27 June 2021, Coreslab had surveyed the three blocks, completed all its inspections and manufactured the precast-concrete elements. The first slab was placed on 2 July 2021 at 13h16 and the entire installation was completed on 3 July 2021 at 09h01.

“This project was certainly not without its challenges, considering its fast-track nature and that the worksite is located about 300km from our factory. It just goes to show that nothing is impossible for Coreslab, especially when great team dynamics are involved. Projects 2000 worked at an impressive rate, so we had to constantly think on our feet to devise solutions very quickly to avoid delaying the principal contractor and to satisfy the end client. There was also no available cellular signal on site, so we had to communicate via Whatsapp. Countless calls were made between me and Thomas White of Projects 2000 to quickly troubleshoot to keep the project on schedule,” Johan Muller of Coreslab says.

Johnny O’ Reilly, owner of Projects 2000, says that the company has been constructing concrete floor slabs in this manner for many years and, in most instances, has relied upon Coreslab to provide the company with the service.

“Coreslab is known for the very high-quality of its precast-concrete elements and installation work – so much so that we even refer to hollowcore slabs as ‘Coreslabs’ within the company. It was a given, therefore, that we would approach this longstanding partner to assist us with fast-tracking yet another project,” O’ Reilly says.

Projects 2000 was appointed as the principal contractor for this development based on the company’s more than 20-year-long legacy delivering quality real-estate development assets in the larger Limpopo province. They include malls, as well as commercial and industrial space.

The two two-storey “sleeper” blocks together house 80 rooms, while the lodge includes administrative space, a kitchen, lounge and bar, in addition to a swimming pool. The four structures have an industrial look and feel in line with the clients’ brief to provide cost-effective yet quality accommodation for members of the contracting team, which includes highly qualified and senior personnel.

The project also provided ample opportunity for Projects 2000 to innovate.

Among the challenges was completing a R32-million development in the four-month contractual period while also working in an extremely outlying area of the province. The construction site is located on a game farm within vicinity of the industrial project.

To mitigate delays, site surveying started many weeks prior to the contractor breaking ground to commence working on the project. Essential construction materials were also procured and stored in a laydown area on site well ahead of the construction commencement date. This included, among others, the bricks, as well as flooring, wall tiles and roof trusses required for the project.

A large builders camp also had to be established on site to provide convenient accommodation for the many people who would eventually work on this project. This is considering that the closet urban node is located about 300km from the worksite.

With employees located on site, work could also commence very early in the mornings to mitigate delays. This is in addition to providing a more cost-effective solution than having to transport workers to and back from the construction site every day.

Between 150 and 170 people worked on this project when it peaked earlier this year, and up to 60% of the total workforce consists of members of the many subcontracting teams.

Louw Whitehead of Cosmoplan Architects & Industrial Designers is also very impressed with the way in which the project has progressed thus far and looks forward to its completion well ahead of the contractual completion date.

“Coreslab has demonstrated once again that hollowcore slabs are an ideal solution for any fast-track project, again completing the installation with minimal effort,” Whitehead says. “I have also visited Corelab’s factory in Polokwane on a number of occasions and remain very impressed with the quality control measures in place there to ensure outstanding workmanship on all its projects.”

Moreover, he credits Projects 2000 for its sound upfront planning that has also contributed to a successful outcome thus far. Only 5 000 bricks will remain out of the 700 000 ordered for this project once the project is completed – as just one example of the high levels of accuracy achieved by the professional team during the early planning phases.

Whitehead considers this development to be one of his many flagship projects. This is considering the extent of innovation that had to be deployed by the entire professional team to deliver the infrastructure in such a short timeframe. Extensive modifications also had to be undertaken to the original design while construction was underway to contain costs. This required careful planning by the design and contracting teams to avoid costly delays. A case in point is the innovative planning of the services in-and-around the shaft to maximise the use of minimal floor space in the rooms. The rooms are about 16m2 and feature a work area and amenities.

Moreover, the design incorporates many cost-effective “green” elements to reduce its energy use. He specified heat pumps that only use a quarter of the electricity required by a geyser, while also being a more affordable alternative to solar water heaters. The bedrooms and entertainment areas have been positioned to receive direct sunlight and take advantage of cooling breezes throughout the day. Aerolite in the ceilings also lowers the natural exchange of heat that occurs in the building. Roof tiles were chosen because they stabilise the building’s interior temperature and, in so doing, reduce the need for heating and cooling. They were also a more cost-effective solution than IBR sheeting to cover the roof. He also included light-emitting diodes in the design wherever possible to reduce the draw on energy.

The structure has also been designed to accommodate a large solar photovoltaic installation at a later stage.

Importantly, Whitehead also designed the “sleeper blocks” and lodge area to cater to the needs of disabled people.

Muller says that the Coreslab team is proud of the part it has played in this project and looks forward to working with the Projects 2000, Cosmoplan Architects & Industrial Designers, Fanoy Consulting and Quanto 2000 on future landmark developments.