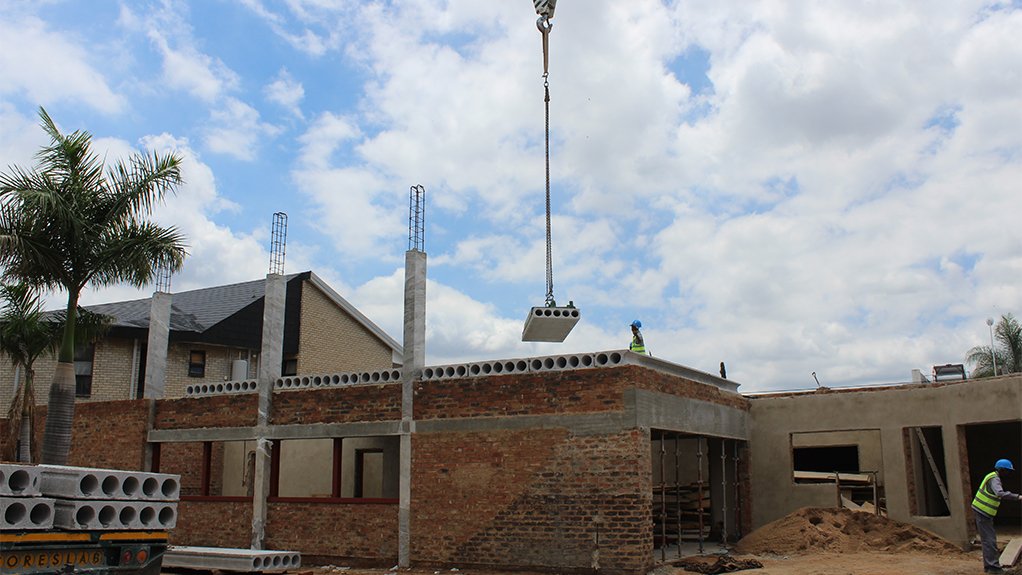 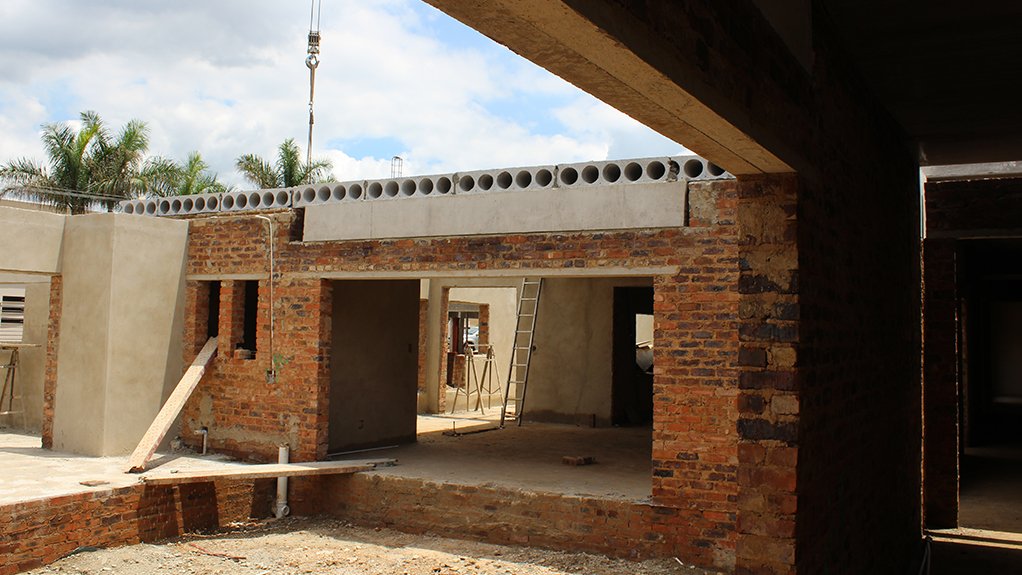 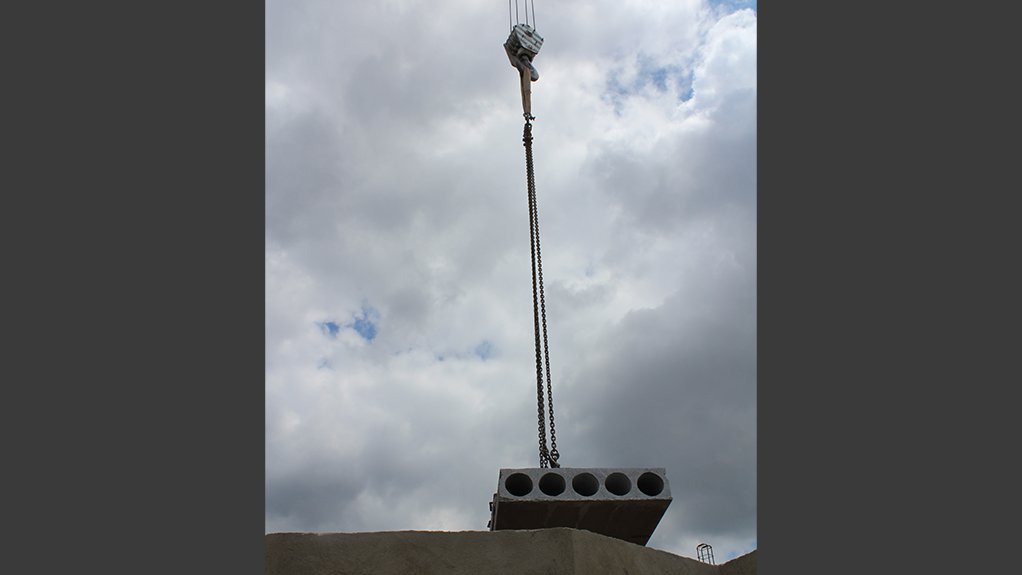 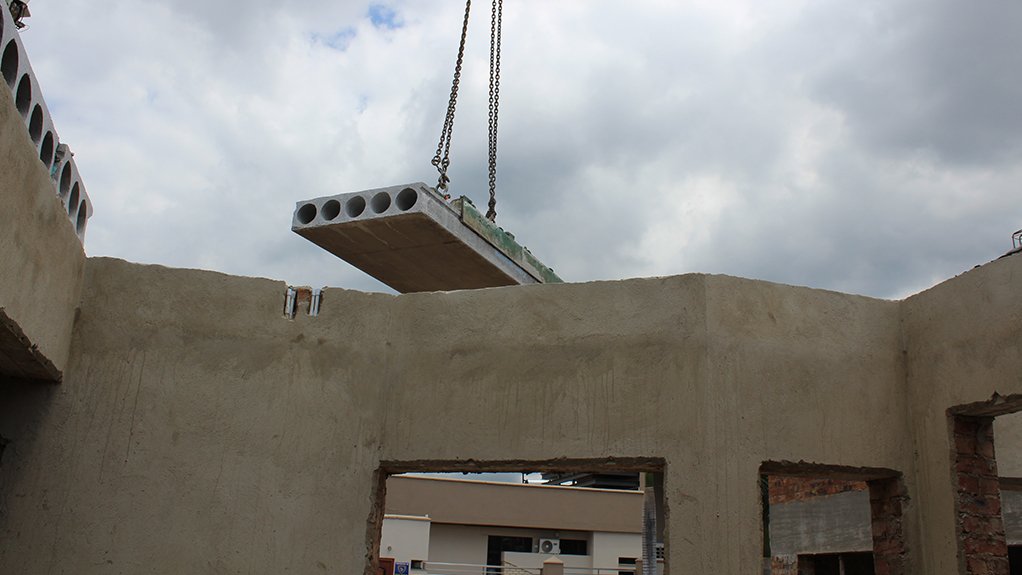 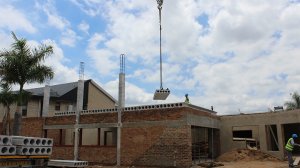 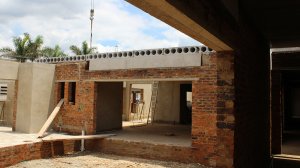 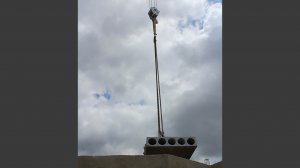 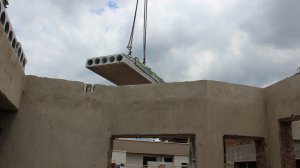 Hollow-core slabs are manufactured to size in a controlled factory environment and installed by a specialist team.
Hollow-core slabs are placed on a thin layer of mortar bedding and then levelled and grouted in place.
CoreSlab is able to place an element every six to seven minutes
The entire floor structure was installed in only two days.

A decision to use hollow-core slabs (HCS) on a large residential project freed up necessary space in an extremely built-up environment, while also reducing construction costs and enabling the property developer, as well as its professional team to significantly accelerate the build.

The eight-bedroom house is being constructed in Nirvana, which is a residential area of Polokwane, Limpopo, that is home to a vibrant and affluent Muslim population.

It is also costlier than HCS considering the additional consumables and materials, such as propping and concrete, required for their installation.

Alternatively, HCS are manufactured to size in a controlled factory environment to extremely high accuracy levels.

Installed by a specialist team, further precision and efficiencies are possible than rib-and-block technologies and conventional in-situ techniques considering the many variables encountered on a traditional construction site. This approach, therefore, eliminates the potential risk of wastage and delays as a result of having to redo work.

Placed on a thin layer of mortar bedding and then levelled and grouted in place, work can commence almost immediately at the next level and below to significantly accelerate the project.

However, one of the significant advantages of HCS on this construction project is the role that it played in freeing up available space in an extremely built-up environment.

The concrete “planks” were transported to site on a just-in-time basis and then lifted directly from the specialised trailer and placed on the load bearing walls using an 80t mobile crane.

Strategically positioned on one side of the development and with a maximum reach of 25m, the crane was able to lift and place the elements, including the heaviest 4,9t slab, which is 320m and spans 10m, with minimal effort.

“We were able to install an entire floor in as little as two days. This included mobilising the crane to site early in the morning to commence installing the elements, the bulk of which weighed 2,3t and were 150m to 250m in length,” Johan Muller, Project Manager of CoreSlab, which was appointed to manufacture and install the HCS, says.

The precast-concrete specialist installs an element between every six and seven minutes.

This is considered an optimal production rate by the precast concrete specialist and an impressive feat that has also been made possible by using innovative equipment. A case in point is the specialised lifting tackle that has been designed by CoreSlab’s engineering team to efficiently and safely handle its HCS.

This is over-and-above the skills and capabilities of the installation team, which comprises seven people, including the crane operator and truck driver who transported the HCS to site.

“This is an extremely complex project, considering the number of changes that have been made to the original architectural design since we commenced working on the project. There is, therefore, very little room for error. Certainly, working with a competent sub-contractor, such as CoreSlab, has helped mitigate some of the risk for this discerning client,” Booysen says.

“Working with Bendor Builders and VBL Consulting Engineers on this prestigious project has been an absolute pleasure. We remain very proud of the role that we have played in promoting the use of HCS, especially in the home-building market,” Jaco de Bruin, Managing Director of CoreSlab, concludes.