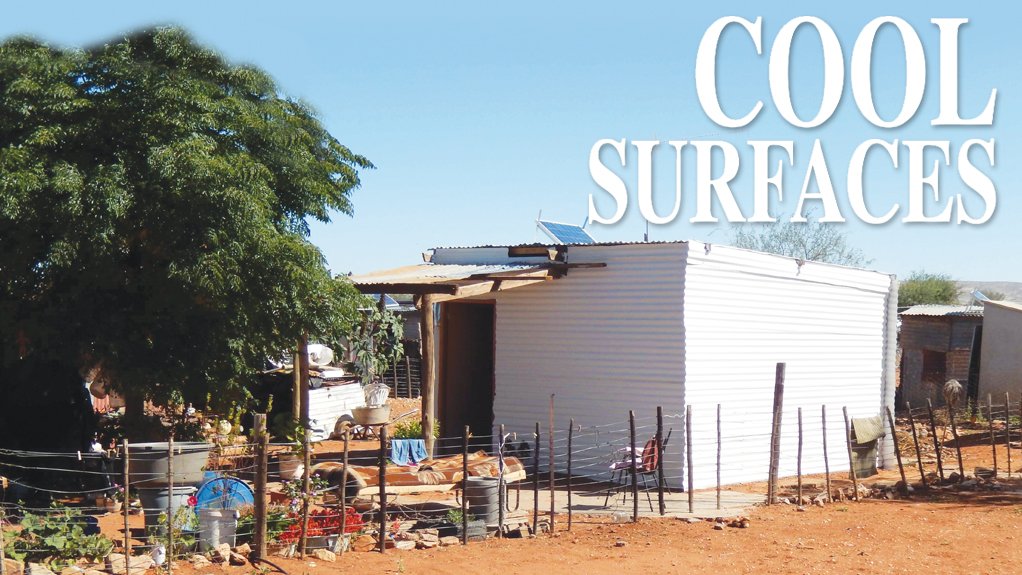 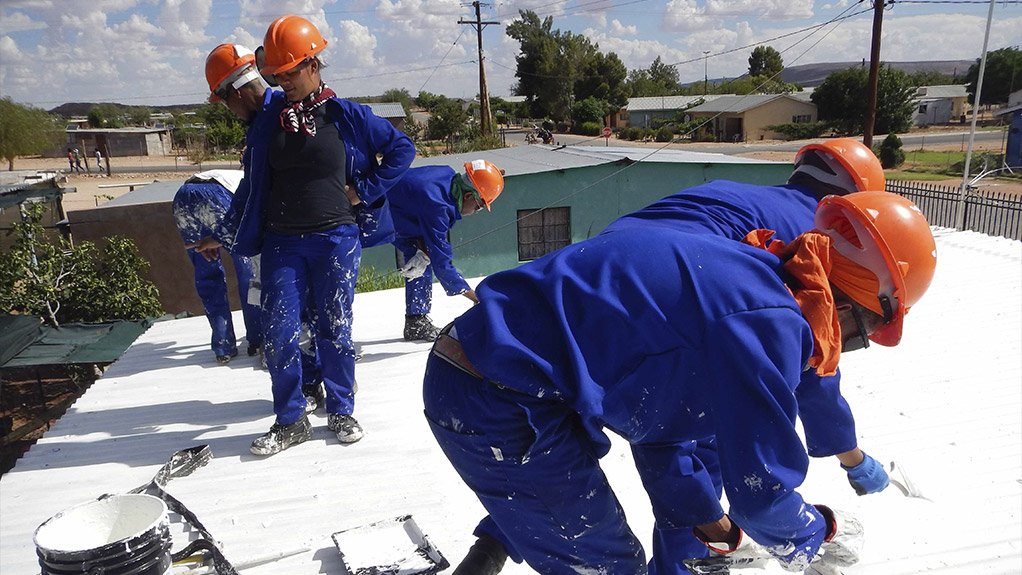 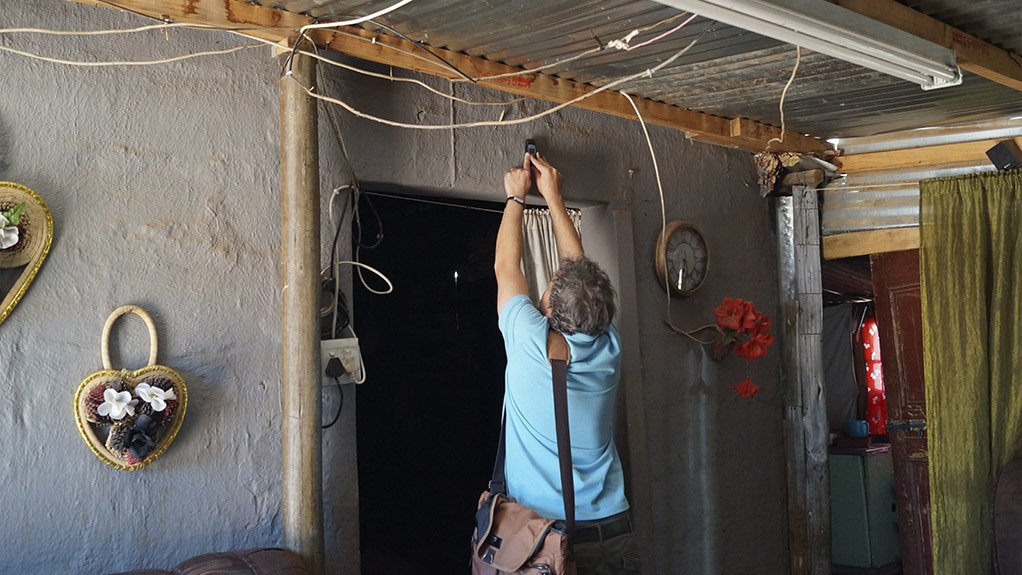 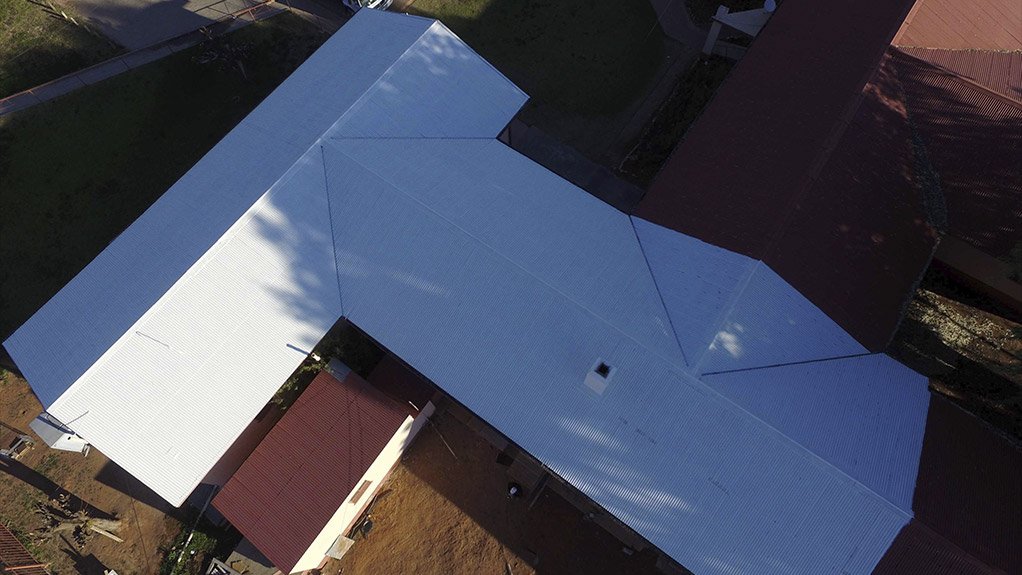 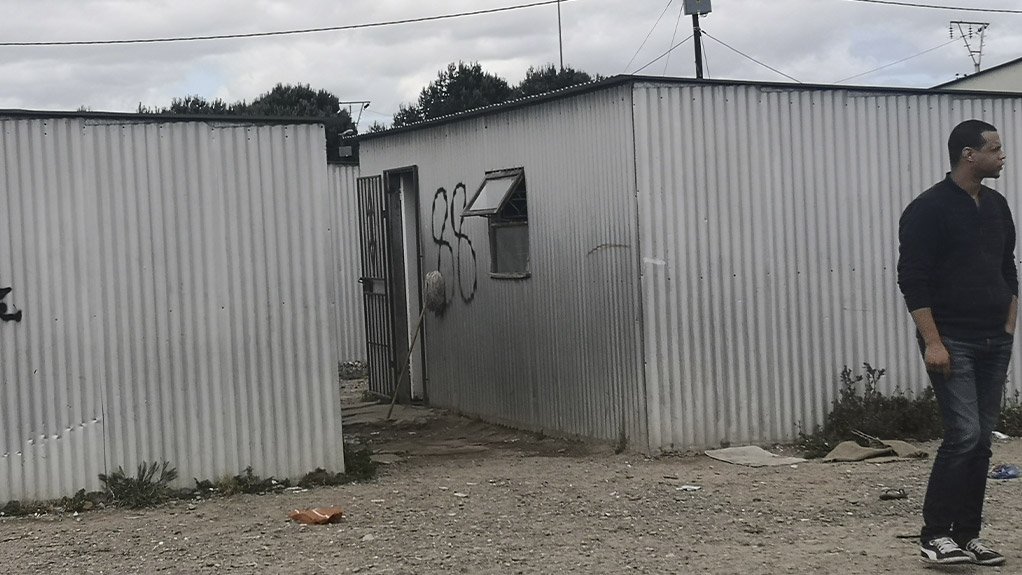 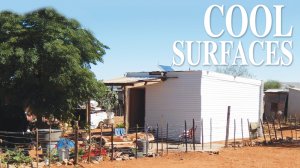 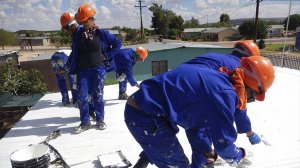 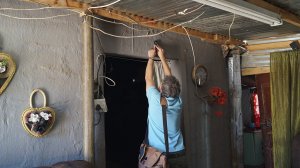 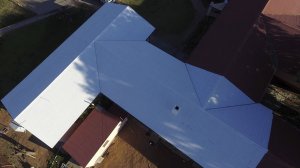 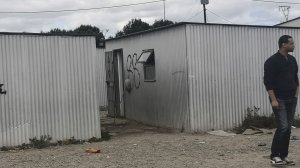 “Tests from the low-cost housing cool surfaces project in Groblershoop completed in April, in the Northern Cape, showed that the indoor daytime temperature of a low-cost, corrugated-iron house dropped from 34 ºC to 25 ºC.”

The design requirements for cool surfaces are onerous because they must reduce indoor temperatures, the cost of cooling and maintenance requirements, and must be inexpensive, fire retardant, waterproof and easy to apply.

Cool surfaces provide passive benefits by reducing heat entering structures and the energy required to keep buildings cool, which lowers the maximum energy demand. Applying cool coatings to low-cost housing and public buildings is a good starting point because it will support adoption at scale and help to meet these most pressing needs first.

“Many of the public buildings we visited had inefficient or broken-down air conditioning equipment, and cool surfaces can reduce the indoor temperatures and improve the efficiency of air conditioning.”

The technology of cool surfaces, a branch of passive cooling technologies, is 30 years old, but still requires thorough assessment prior to local deployment, she highlights.

“We have been doing research on a range of projects for more than five years to determine the characteristics of cool coatings, such as formulations that are waterproof, elastic enough to accommodate often large local daily temperature ranges without peeling or cracking, are not damaged by constant, intense ultraviolet light, and can be used on concrete, tiles and corrugated roofing.”

Similarly, due consideration was given to the solvents, various additives and binders to ensure that they provide the desired additional benefits and do not contribute to pollution during application or during the coating’s life span.

Meanwhile, the 27 500 m2 Groblershoop project and the $100 000 grant the Sanedi cool surfaces projects received from the 1-Million Cool Roofs Challenge, in October, have provided a welcome boost to momentum for the roll-out of large-scale demonstration projects and local use of cool surfaces, although the awareness of the technology among decision-makers is still limited, she avers.

“Using our research, decision-makers can now include cool surfaces as one of the technologies in their energy efficiency projects,” she says.

Lundall is working with insulation industry associations and serves on the South African National Bureau of Standards energy efficient buildings technical committee 204 SANS 10400 XA, with the aim of including the technology in the voluntary energy efficient buildings standards. A mandatory inclusion in the code will aid commercial and consumer adoption of the technology.

The International Energy Agency (IEA) ‘Future of Cooling 2018’ report highlights that cooling-energy use in buildings has doubled since 2000, from 3.6 EJ to 7 EJ, making it the fastest-growing end-use in buildings, led by a combination of warmer temperatures and increased activity, owing to population and economic growth.

Making cooling more efficient would also yield multiple benefits, making it more affordable, secure and sustainable, as well as saving as much as $2.9-trillion in investment, fuel and operating costs, the report states.

The issue is particularly poignant in the fastest-growing nations, with the biggest increase seen in hot countries like India, where, without action, the share of air conditioning in peak electricity load could reach 45% in 2050, up from 10% today. This will require large investments in new power plants to meet peak power demand at night, which cannot be met with solar photovoltaic technology.

Supplying power to ACs comes with large costs and environmental implications. One crucial factor is that the efficiency of these new ACs can vary widely, the report warns.

“Setting higher efficiency standards for cooling is one of the easiest steps governments can take to reduce the need for new power plants, cut emissions and reduce costs at the same time,” says IEA executive director Dr Fatih Birol.

Only 8% of the 2.8-billion people living in the hottest parts of the world have air conditioning. This figure drops to 6% of people in South Africa with air conditioning in their homes, according to the IEA ‘Future of Cooling 2018’ report.

Through stringent minimum energy performance standards and other measures, such as labelling, the average energy efficiency of the stock of ACs worldwide could more than double between now and 2050. This would greatly reduce the need to build new electricity infrastructure to meet rising demand, the report highlights.

Cool surfaces can reduce AC energy use by up to 20% on the top floor of air-conditioned buildings and limit cooling loads during peak times, highlights Lundall.

“The idea of passive cooling is to make buildings as nonpolluting and energy efficient as possible. A cool roof substantially reduces the cooling load of industrial, commercial and residential buildings, providing several direct benefits for the building owner and occupants.”

The whitening of 100 m2 of grey roofing offsets the warming effect of 10 t of carbon dioxide emissions (or 0.6 t a year for the life of the roof). A cool roof can reduce cooling energy costs by 7% to 15%, details Lundall.

Colour is important. While the molecular structures of modern cool coatings prevent heat ingress even with deeper colour pigment, lighter cool coatings remain more effective than darker ones, she adds.

“A cool surface must act as an effective barrier to ensure that most of the heat does not penetrate into the building materials and warm the structure. This was a key requirement specifically to make [structures built using] unsuitable materials, such as corrugated iron, cooler,” she says.

A baseline study Lundall conducted showed that air conditioning in many public buildings was very inefficient, caused condensation that led to other maintenance problems, was a large drain on electricity and did not change the internal temperature much, compared with their load profile or even their nonuse.

“While cool surfaces made an immediate difference on the structures we applied them to during the pilot projects, the technology would provide greater benefits if included as part of the design parameters of buildings,” emphasises Lundall.

She adds that energy efficient building designs must be suitable for the local climate and that standard building designs are not appropriate for all environmental conditions. Due consideration must be given to building orientation, placement, size and direction of windows and ventilation.

“Including simple, energy-passive interventions in the design will improve a building’s energy efficiency without sacrificing aesthetics or unduly increasing the budget.”

There is an abundance of information from comparable climatic regions and conditions that local architects and property developers can use, she adds.

However, given that most low-income households typically cannot afford cooling equipment, the main aim of the cool surfaces technology is to provide passive cooling through a retrofit roll-out.

She warns that the brief, cold winters often claim more lives than the enduring heat, and the designs of low-cost houses must also focus on preventing heat egress during the winter months – for example, through the use of insulation, insulating building materials or better designs.

“We must improve the designs of the houses we build for our low-cost housing projects. Poorly designed low-cost houses and/or [houses built using] inappropriate materials have a negative impact on the suitability, energy efficiency and habitability of these structures.

While cooling effects from the broad use of cool surfaces will vary from city to city, studies indicate a potential cooling of the urban heat-island (UHI) effect – the phenomenon where sufficiently dense human settlements are considerably warmer than surrounding rural areas – by 2 ºC to 4 ºC.

However, successful deployment will require collaboration among national departments and municipal and provincial officials, as well as sustained implementation, she says.

“The most promising approach is to have the correct blend of ready-to-use cooling technologies and energy efficiency policies based on detailed information to reduce the costs and improve the conditions in urban buildings. An unexpectedly effective policy driver is word of mouth from people working in public buildings where we deployed cool coatings.”

Future work to use passive cooling to make human settlements more energy efficient will include cool paving technologies, as pavements and roads contribute considerably to the UHI effect, says Lundall.

Passive cooling technologies are, however, only one part of an arsenal of science-based technological and behavioural approaches to improve energy efficiency.

“We must adapt our approach to developing and maintaining human settlements, not only through the use of technologies, but also through behavioural changes, better building and urban designs, urban green spaces, rooftop gardens and the use of indigenous, water-wise plants to cast shade over hot pavements and open areas. Sanedi’s contribution is to help develop the science underpinning these approaches,” concludes Lundall.