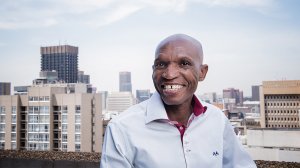 The new development will replace a building that burned down in June 2014. Architecture and urban design studio Local Studio is responsible for the architectural design of the building, construction company Dryden Construction is contracted for the building construction, consulting structural engineering company and project manager Lines & Smolka will engineer the project, while architectural design firm Design Republic will work on the interior design.

“Lightweight walling is used in the construction of each apartment, as it is strong, soundproof and . . . easy to work with,” Makwela adds.

He says the building will use energy efficient systems where possible, including a full hot water heat pump system and solar panel installation, which not only saves energy but is also a cost-effective alternative.

The balcony for each apartment will be fabricated from old sun visors repurposed as balustrades, which “will give the building a new, fresh look,” adds Makwela.

The project, initiated last year, was approved on January 18 this year, while engineering started on March 1 and construction began on July 1.

The first tenancy was settled on September 1, which Makwela noted as the first project milestone.

The R250-million project has been financed through equity and debt funding, while a percentage of funding was provided by TUHF. The project employs about 350 people on site.

The building is in close proximity to the Gautrain station at Park Station, which Makwela believes makes it an ideal residential destination, providing accommodation for more than a thousand tenants.

Makwela says residents will have access to facilities such as a fully equipped gym and fitness centre, a business centre, an outdoor swimming pool, a coffee shop, a cinema, an auditorium, braai areas, a club house, a soccer field and children’s playground facilities.

“Tenants vacated the building after [a fire]. The building was used commercially as offices. Some floors were severely affected by the fire, while others only [suffered] smoke damage. “Furniture and documents were recovered from the building, where possible, but it was not safe for occupation as the electrical wires had also been burnt . . .[it was then] acquired for the Braamfontein Gate residential conversion, which [presented] the opportunity to create residential apartments in an unused space,” says Makwela.

He concludes that, from June 2017, Braamfontein Gate will offer a distinctive lifestyle in the heart of Braamfontein.