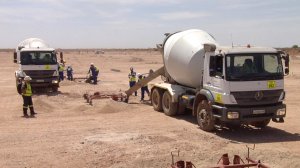 Ground was broken this week at the R9-billion, 100 MW Kathu Solar Park concentrated solar power (CSP) project, in the Northern Cape, which is set to be one of the largest projects of its kind in the country.

The parabolic-trough technology plant, which is being developed by an Engie-led consortium, will be equipped with a molten-salt storage system that allows 4.5 hours of thermal energy storage and is expected to be operational in the second half of 2018.

The project was awarded in the third round of the Renewable Energy Independent Power Producer Procurement Programme (REIPPPP) led by the Department of Energy and will supply electricity to Eskom under a 20-year power purchase agreement.

Between 1 200 and 1 500 people will be employed during the 28-month construction period. This will encompass the solar field and the power block that will be erected on site, followed by a testing period, at which point commercial operation will be declared.

Speaking to Engineering News Online during a site visit, Engie Southern Africa CEO Mohamed Hoosen said half of the 8 km2 site was covered by the parabolic troughs, marking the first CSP project for the company.

He noted that the company would now look to develop more of these ventures in the country, as it had already submitted a number of projects under the REIPPPP’s expedited window.

“We have been here for nine years and have every intention of continuing our development here,” he added.

“With Investec as one of the initial developers, it was particularly pleasing for us to see the project progress through early development and financing to the construction phase. In an important time for the REIPPPP and independent power producers, it is especially encouraging to see a project of this magnitude, using young technology getting to this significant milestone.

“When initially approached, Investec was excited by the potential of the project and, leveraging off our established relationship with Engie, were able to partner with them to develop the project to its current form. During the development phase, the project benefited immensely from the technical expertise of Engie, as well as Investec’s experience and relationships within the local market. The Kathu Solar Park project underlines our strategic long-term commitment to the sector, further demonstrated by our stated intention to launch an energy equity investment fund in the near future,” said Investec's Andre Wepener.

The plant, being developed in conjunction with engineering and technology group Sener and Spain-based Acciona, is one of seven planned CSP power plants in the market, making up 16% of the total CSP allocation in the country and is expected to contribute 390 000 MWh/y to the national grid once completion is reached.

Acciona Industrial CEO Ramón Jimenez said the project furthered the company’s aim of reducing its carbon emissions and would be to the benefit of the community.

He explained that the company also aimed to develop its technology to be more cost-effective to lower the cost of electricity per kilowatt-hour.

The Kathu Solar Park is Acciona’s fourth solar project in the country, with a recent survey conducted by professional services firm EY showing that its activities in South Africa have contributed $295-million to the gross domestic product and created over 9 500 jobs.

Sener regional MD Siyabonga Mbanjwa added that the project has shown the company’s commitment to developing renewable-energy projects in the country.

“This is one of the project’s that will propel us to the next phase of our growth,” he noted.

He added that the CSP technology was imperative to bolster power supply in the country, as it allowed the plant to generate electricity when needed. Through the molten salt heat storage system, power generation can be carried out at night and in cloudy conditions.

“It also gives the option to use the electricity at times when it is needed the most, usually late afternoons to the evenings,” Mbanjwa stated.