Concor paves the way for remote Botswana mine

Concor paves the way for remote Botswana mine 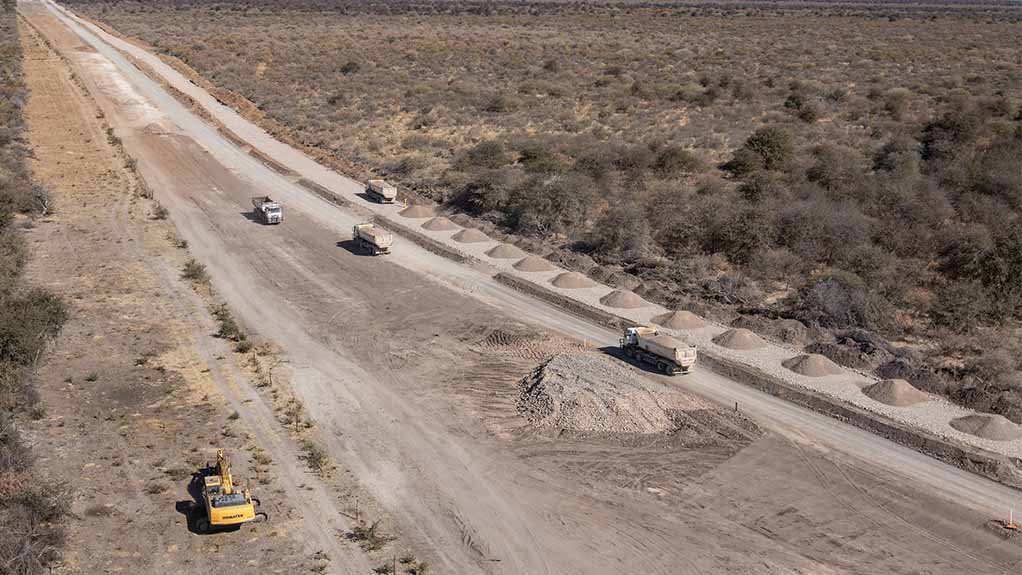 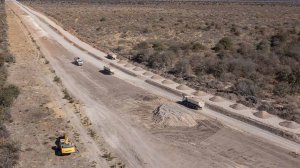 Concor Infrastructure is creating a corridor for both roads in parallel.

Tackling the demanding conditions of Botswana’s Kalahari Desert, Concor Infrastructure is nearing completion of a 35 km access road for the Khoemacau Copper Silver Starter Project. Concor is also busy with constructing a parallel haul road , as well as conducting earthworks and concrete civils at the Khoemacau Boseto processing plant.

The Khoemacau Copper Project, located in the central Kalahari copper belt some 65 km southwest of Maun, is developing underground operations at its flagship Zone 5 deposit. The mine plan involves three adjacent underground mines at Zone 5, each producing over 1,2 million tonnes a year in their first five years of production. The haul road will allow mineralised material to be trucked 35 km from Zone 5 to the Boseto processing facility, while the access road will be used by light vehicles. After processing at Boseto, the mineral concentrate will be shipped out for smelting.

Good progress has been made on construction of the access road according to Jay Juganan, contracts director at Concor Infrastructure. The contract for both the access and haul roads was awarded in November 2018.

“The access road was little more than a sand track when we established on site and was accessible only by 4x4 vehicles,” says Juganan. “Essentially, we are creating a corridor for both roads in parallel, and for the powerlines to be installed by another contractor.”

The planning of the haul road also had to consider the large and ancient Baobab trees that are common in the area. Preservation of these trees is a vital imperative, requiring the haul road to be diverted on occasion to avoid about half a dozen Baobabs, which are hundreds of years old.

While the access road is 90% complete and due for completion in Q3 2020, the work on the haul road is also expected to be completed in Q3 this year. Road construction comprises a 600 mm deep cut filled with pioneer crushed rock followed by a G3 sub base and base layer. In some areas the crushed rock is replaced by a natural calcrete. The wearing course is a 9/19 mm double seal. Concor has had to crush all aggregate on site from the old mine waste rock stockpile at Boseto.

Concor Infrastructure contracts manager Tiaan Krugel notes the remote location of the site and the dry conditions are among the key challenges encountered on this project.

“The sourcing and timing of the supply of equipment, parts and construction material required careful and detailed planning,” Krugel says. “The majority had to come from the capital Gaborone – 900 km away, with the other challenge being that most of our equipment OEMs are based in Johannesburg, which is more than 1 300 km from site.”

The scope of Concor’s work at the Boseto process plant, the contract which was awarded in November 2019, includes earthworks and concrete civils to the existing and for the new process plant structures for the crushing, milling, flotation and concentrate handling circuits. The plant had previously treated material from an open pit copper mining operation at Boseto, under the ownership of a different company.

Krugel highlights the challenges of working with concrete on a remote site, especially where temperatures can reach over 40 degrees Celsius during working hours.

“A special concrete mix was designed to accommodate on-site conditions,” he says. “This includes the use of admixtures to prolong the concrete’s workability as well as having to chill the water we use before it is added to the cement and aggregates.”

In addition to the refurbishment and upgrading work at Boseto, Concor has also contributed to preparing the infrastructure at the Zone 5 mining site, where underground development is underway. The work included all internal roads at the Zone 5 mine, terracing for the 650-person accommodation camp, the mine administration surface infrastructure area, the mine workshops and stores area and the explosives magazine together with construction of the ROM pads. The Khoemacau Starter Project expects to produce 62,000 tonnes of copper and 1,9 million ounces of silver each year over its planned life of more than 20 years.

“Despite the restrictions related to the Covid-19 pandemic, which saw a reduction of staff numbers on site due to individual choices, we are working hard to ensure that programme schedules will be met,” says Juganan.