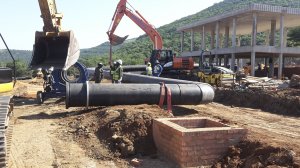 This amounted to R1.8-million of the total R19-million expansion project.

The expansion project began in January and is due for completion in September.

Plasti-Tech supplied the equipment within six weeks of the project having started, the biggest challenge being transport, says Plasti-Tech managing member Brad Chamont.

With the purification plant being based in rural Nongoma, KwaZulu-Natal, Chamont says Plasti-Tech had to transport multiple loads of nested piping to reduce the costs of getting the pipes on site, owing to the area being undeveloped, with no proper roads leading to and from the site and urban facilities some distance away.

This project allows Plasti-Tech to show- case its ability to handle and install large-bore HDPE pipes and its fabricated fittings. “It is new for us to be involved in a water purification plant, as our business mostly supplies the mining industry.”

The water purification plant, along with a reservoir and an access road, was first commissioned in 2015 and aims to address the water and sanitation needs of the Nongoma community. The project has necessitated the involvement of civils, mechanical and electrical services and supply, overseen by project stakeholder engineering company Isimo Project Engineers, construction company Stefanutti Stocks and water treatment services provider Water Purification Chemical & Plant.

“With extensive expertise in this field, coupled with excellent pricing and lead times on delivery, it made sense that we were chosen to supply the HDPE piping and fittings for this project,” concludes Chamont.