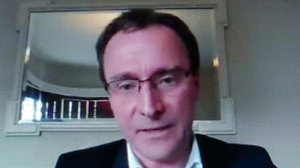 The Competition Commission’s James Hodge gives insight into how the organisation approaches the price regulation and excessive pricing situation in South Africa in its time of crisis. Video & Editing: Creamer Media’s Darlene Creamer.

Firms and retailers that are found to increase prices during the Covid-19 pandemic will need to substantiate why this is the case when approached by the Competition Commission, according to the commission’s chief economist James Hodge.

While various factors are taken into account – such as product supply, transport and a change in consumer behaviour – Hodge states that “there is no excuse for excessive margin increases”.

He laments that the main problem, since the initial national lockdown came into effect on March 26, is that some firms wish to “exploit the situation and use the environment and its related context to argue hypothetical prices”.

He adds that consumers have also “become vigilant and a little more astute and aware”, and adds that this has changed in recent weeks.

When the commission considers a case of price increases, it takes changing consumer behaviour into account, alongside the behaviour from a supplier and the behaviour of resellers (such as retailers).

However, Hodge notes that the problem with margin increases is that these increases often compound when driven through an entire supply and value chain.

“If the manufacturer increases its margin, the inflation through the chain is huge,” Hodge says, adding that it is not a substantive reason for a reseller to increase its margin owing to importation costs going up.

While there is an argument that the higher price means the business needs more working capital, Hodge advises that firms need to use their margin prior to the crisis as a benchmark to adequately run the business and cover overheads.

“[The commission] is aware that costs go up, and we’re also aware of some of the impacts in the full value chain as well, such as the depreciating rand, [and] other countries having taken actions to protect their own consumers through measures like export value-added tax,” he comments, noting that this often drives price increases in certain commodities.

“This is something we acknowledge and understand, but it is still not an excuse for just any margin increase through the chain.”

Taking this into account, Hodge notes that the commission “is always willing to look at those costs” but warns that “we don’t just accept that costs have changed”.