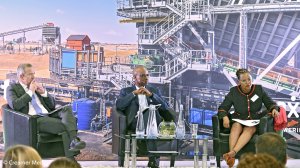 “That’s a big shift, over and beyond what was originally planned in the IRP 2019. What is becoming very critical now is how we actually fast-track the enabling of self-generation to happen, because we know that for the coming 18 months to two years, we’re going to be confronted by continuous load-shedding, until such time as the maintenance programme has been done effectively, and Medupi and Kusile are sorted out. (Also watch attached Creamer Media video.)

“Like many other mining companies, we are looking at how we can plug part of that gap by providing our own ability to generate power for ourselves, and over and above that we see the area of renewable energy being a very critical area going into the future, hence our decision to buy the remaining 50% of Cennergi. All the conditions precedent have been met and at the end of this month, we’ll close that transaction formally, which means we'll own 100% of the renewable energy company,” he said.

Forming part of Exxaro’s response to climate change is the targeted reduction of its coal resources by 22% over time, as well as a commitment to achieving a carbon neutral footprint by 2050.

He said Cennergi provided Exxaro with an opportunity to focus its resources and capital allocation much more rigorously around renewables.

“Part of the strategy is to use Cennergi as a stepping stone off creating an energy business going into the future,” he told Mining Weekly.

He made an impassioned plea for climate change to be taken with the utmost seriousness. The black-led diversified resources company is itself aligning strongly to the Paris Agreement in response to climate change risk, and succeeding in promoting powerful environment, social and governance (ESG) excellence.

“If we don’t take climate change issues very seriously and see it as being part of our responsibility to respond in a very effective and impactful ways, God help us, because our children will be inheriting a very, very challenging future,” he said.

The same seriousness should, he said, also be given to unemployment and inequality. In this regard, Exxaro’s mineral succession programme is studying ways of repurposing its mining land for the establishment of new economies ahead of mine closure and resource depletion.

“We can be the catalyst of creating new economies,” Mgojo said.

The company has also partnered with Anglo American, the Council for Scientific and Industrial Research, World Vision and the Limpopo Provincial Premier’s Office on introducing programmes that can create new economies and projects.

“It’s about social impact. Gone are the days of just ticking boxes around social labour plans. What is critical is creating big socioeconomic impacts that are going to be sustainable,” he said.

Areas of Mpumalanga where power stations will eventually be decommissioned will need substitute economies to come into play.

“As much as renewables will create new opportunities, we need an economy that grows even beyond what renewables can provide. It’s going to be the small, medium-sized and micro-enterprises (SMMEs) that are going to be a critical part of that growth, which talks to our enterprise supplier development strategy whereby we are now focusing on capacitating SMMEs and suppliers to us so that they can be creating more jobs," he said.

In the past year, this has yielded 743 jobs, with more than R170-million invested in 30 black-owned small businesses.

The performance of the coal business remained resilient with some strong operational wins. The starting point was an assessment of coal quality and yield to determine sustainable production volumes and life-of-mine under different climate scenarios.

In 2020, it is targeting a 7% uptick in domestic product and an 11% increase in sales tonnes of 7%, driven by back-on-track Medupi offtake, expected ramp-up at Matla, and a focus on growing export levels from the new Belfast and GG6.