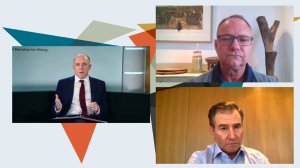 JOHANNESBURG (miningweekly.com) – The disposal of thermal coal mines in response to environmental, social and governance (ESG) investors is not lowering carbon dioxide emissions but exacerbating the problem, Glencore CEO Ivan Glasenberg pointed out on Friday.

Questioned by Financial Times (FT) natural resources editor Neil Hume at the FT Commodities Mining Summit during a panel discussion with Anglo American CEO Mark Cutifani, Glasenberg said that allowing coal majors to deplete their own coal assets contributed more to the Paris Agreement on climate change than their disposal to companies that were then free to grow them rather than deplete them. (Also watch attached Creamer Media video.)

“We have a large resource of coal but we are running down the mines that we’re operating; they are coming to the end of their lives. We will run down these mines without replacing them and without building new mines,” Glasenberg said during the virtual event covered by Mining Weekly.

The main areas where Glenore is doing that are in Colombia, where Prodeco is already on care and maintenance, and the Cerrejon joint venture mine with Anglo American, which comes to the end of its life in 2031.

“We also have South African operations which will deplete. That’s what we’re doing. We’re running down those operations so we are able to reduce our Scope 3 emissions by 30%,” Glasenberg said.

The other view, which Glasenberg said was being taken by some coal companies to reduce Scope 3, was to spin off or sell their coal mines to buyers with no restrictions.

“If you look at that, how does that help the world to reach the Paris accord? Those mines are not depleting and running down. Those mines are going into the hands of other players in the industry, who have no intention of reducing Scope 3 emissions and if anything, it gives them a free hand to start producing more coal," he said.

“So, I don’t see where spinning off or selling coal mines is going to help the world to hit the Paris climate accord. So, we're rather saying we’ll own them, we’ll run them down and by doing that, we’ve got more chance of reaching the Paris accord than anyone else because of our reduction of Scope 3 emissions.

“Secondly, what we are able to do by running down our coal mines and reducing our Scope 3 emissions is we generate cash during that period and we invest that money in the new generation mines which we have.

“We’re then taking that money and funding, maybe brownfield, as you said you’ve heard my opinion on greenfield, expansion at the mines which are for the new generation commodities, copper, and as you are aware we are a major copper producer in the world, we produce 1.3-million tonnes of copper, and we’ll continue producing that in future. We’re also the largest producer of cobalt, and we all know that that is required in the batteries for the electric vehicles. We produce about 46 000 t of cobalt in an 140 000 t market. We're a major producer of nickel, which is required in batteries, and look at the demand for that going forward in the battery required in electric vehicles, there’s big demand for that.

“So, we are starting to transverse those funds out of the coal business into these new generation commodities. So, I think we’re in a unique position to be able to do that,” Glasenberg added.

Asked by moderator Hume to comment on Glasenberg’s contention that selling coal assets did not really address the Scope 3 issue because the assets were just being passed on to somebody else, Cutifani said: “I think he’s absolutely right and when we talked about what we were doing in thermal coal, we made the point that a responsible transition meant that we just didn’t sell assets on a whim. We sold our thermal assetsto responsible producers. It’s been done in a responsible way.

"At the end of the day, shareholders have to make a choice about the companies they’re willing to invest in. We made a decision. Thermal coal this year is 1% of our Ebitda. For that noise, it’s better off we transition into those commodities of the future that we think will really provide the returns for our shareholders and we’ve taken the view that the transition from thermal coal will probably happen a bit quicker than people think because we think that the use of renewables, the transition to hydrogen, batteries and other products will be quicker than people anticipate.

“We’re also driven by our financial imperative as well. We have to make sure our stakeholders are all managed appropriately so we just don’t bail out overnight. As Ivan said, we must think very carefully about the way we transition,” said Cutifani.