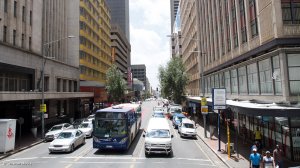 City of Johannesburg executive mayor Parks Tau discusses the significance of Phase 1B of the Rea Vaya bus rapid transport system, in Johannesburg.

The City of Johannesburg has rolled out the second phase of the Rea Vaya bus rapid transit (BRT) system, in Johannesburg, following protracted negotiations between city officials and taxi association leaders.

The launch of the R1.7-billion Phase 1B, which would operate on a dedicated lane between Noordgesig station, in Soweto, and Ellis Park station, in Doornfontein, came shortly after the conclusion of an “equitable deal” that would see public transport operators affected by the introduction of an alternative public transport system, being remunerated.

While city officials would not elaborate on the nature or extent of this remuneration, City of Johannesburg executive mayor Parks Tau said at the launch, on Monday, that the in-principle agreement, which was concluded last week, had outlined a business model that allowed former bus and taxi operators to be redeployed within the Rea Vaya system.

“The deal will also see the removal of competing vehicles from the route and the scrapping of disposable or old and unsafe taxis and buses. An extensive minibus taxi driver empowerment programme will also be implemented to enable taxi drivers to become Rea Vaya drivers,” he said.

The 12-year bus operations contract would also see affected taxi and bus operators operating this second phase from May next year.

Tau added that the BRT system was aimed at dismantling spatial segregation and enabling residents in the urban periphery to gain access to facilities and institutions within the city’s commercial hubs.

It also formed part of the city’s larger Corridors of Freedom initiative, which aimed to develop well-planned transport arteries linked to interchanges dedicated to mixed-used development, such as high-density accommodation supported by office buildings, retail development and recreation sites.

“This initiative, of which BRT is a critical element, will transform entrenched settlement patterns that have shunted the majority of residents to the outskirts of the city and away from economic opportunities, facilities and access to jobs,” he asserted.

Thirteen new Rea Vaya stations were built along the Phase 1B trunk route, which is expected to carry 134 buses and up to 60 000 commuters a day.

To use the bus route, commuters buy Rea Vaya smartcards at ticket counters inside the designated stations and load a specified amount of credit, after which the card is swiped every time the commuter enters and exits a Rea Vaya bus.

The transport tariff is calculated in 5 km increments, starting at R5.50 for up to 5 km of travel, and is capped at R12.50 for the entire 93 km route.

Construction on the third phase of the Rea Vaya BRT system is set to start next year and will see the construction of a dedicated bus lane and stations servicing the route from Wits to the Sandton Gautrain station.