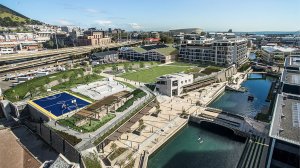 CHRYSO products made a significant contribution to the successful execution of the award-winning Battery Park project.

CHRYSO’s significant contribution to the successful execution of the award-winning Battery Park project highlights its commitment to provide a comprehensive range of products which optimise the placing, performance and aesthetics of concrete.

Battery Park, a 12 000 m2 urban precinct at the entrance to the V&A Waterfront in Cape Town, comprises a park and piazza and well as a concealed multi-level parking facility and pedestrian routes. A winner of the CSSA 2019 Fulton Award in the category “Buildings greater than 3-storeys”, this project is a testimony to excellence in the use of concrete.

The use of different concrete elements displays the versatility of concrete. In many of these elements, CHRYSO products were used resulting in exceptionally detailed and finished concrete structures and elements.

CHRYSO® Plast Omega 122 W, a water reducing plasticiser, was incorporated in the concrete mix to optimise the workability characteristics. After placing the concrete, CHRYSO® Cure Acrylic, a water-based slightly viscous solution, was used as a curing compound to ensure colourless, stain-free surfaces.

For the construction and expansion joints, two products from a.b.e Construction Chemicals, part of the CHRYSO group, were used. Dowsil® 890 SL, a self-levelling silicone sealant, was used to seal irregular planes between concrete paving and asphalt surfaces, with the added benefit of providing fuel resistant seals. Doswil® 888, a non-sag silicone joint sealant, was applied to standard concrete pavement joints.

CHRYSO is proud to be associated with the Battery Park project in so many different applications. This is a true accolade not only for the quality of their products, but also for the CHRYSO sales and technical teams.