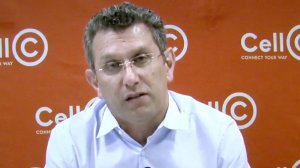 The company’s net loss widened significantly from R875-million in the first half of 2019 to R7.5-billion in the six months to June 2020, owing to one-off costs and adjustments into billions of rands.

The net loss after tax includes impairments to the value of R5-billion.

Cell C reported a loss before interest and taxes of R5.3-billion for the half-year under review, plunging from a profit of R90-million in the first six months of 2019.

As Cell C focuses on offering the right solutions and services at the right margins and yield, amid complex recapitalisation discussions, Craigie Stevenson believes it is on track.

“The last six months show the early signs of recovery – our earnings are up, our margins are stabilising and there is a strong single-mindedness on cutting additional costs. We are leading the way in building a reloaded Cell C that creates value for its stakeholders,” he told stakeholders during a webcast.

Cell C achieved a 64% improvement in normalised earnings to R1.8-billion during the six months ended June 30, 2020, despite the depressed local retail environment, a decline in consumers’ disposable income and the national lockdown.

Excluding the recapitalisation and restructure costs, earnings before interest and taxes for the six months would have improved 80% to R162-million.

The mobile operator also generated R418-million more cash from operations during the six months under review compared with the previous period.

Overall revenue contracted to R6.9-billion during the first half of 2020, from the R7.4-billion achieved in the prior corresponding period last year, while service revenue declined 6% to R6.5-billion. The company’s hybrid and fibre-to-the-home services, however, experienced a 16.7% and 11.1% increase in sales respectively.

While revenue from the wholesale business reflected a 7% decline owing to an exit from wholesale agreements which diluted margins and congested the network, the mobile virtual network operator portion continued to reflect solid growth and delivered an 18% increase to R398-million.

“The first six months of 2020 was characterised by the continuing slowdown in the economy which weakened general customer spend. We have taken active steps to reduce our focus on pure revenue and subscriber growth and have shifted to more profitable, long-term growth in the prepaid and contract segments,” explained Cell C CFO Zaf Mahomed.

“In line with management’s strategy to rationalise its subscriber customer base while retaining profitable customers, the prepaid subscriber base declined by 34.6% over a 12-month period. This translated into only a 9.9% decrease in prepaid revenue, while gross margin grew by 11.5% and prepaid average revenue per user (ARPU) increased by 26.9%,” he continued.

The rationalisation process translated into an overall improvement in the customer base and a further 4.8% increase in prepaid ARPU since the end of June 2020.

“We remain focused on restructuring the balance sheet and optimising the business for long-term competitiveness. We have a legacy debt challenge in our balance sheet, rather than an income statement one which will be addressed with the recapitalisation,” Mahomed added.

Craigie Stevenson noted that he expects operating margins to improve over the medium term as the business transitions to its new business model.

“To stay competitive, Cell C had to take a different approach against our large rivals who are all heavily invested in capital-hungry infrastructure – three operators with large-scale infrastructure simply doesn’t make financial sense.

“Our vision is to be the biggest aggregator of wholesale capacity and customers to the infrastructure providers. We will collaborate on infrastructure but compete on products and services. The fourth-generation roaming agreement with MTN is the first step in cost synergies and bringing tangible benefits to our customers,” he concluded.