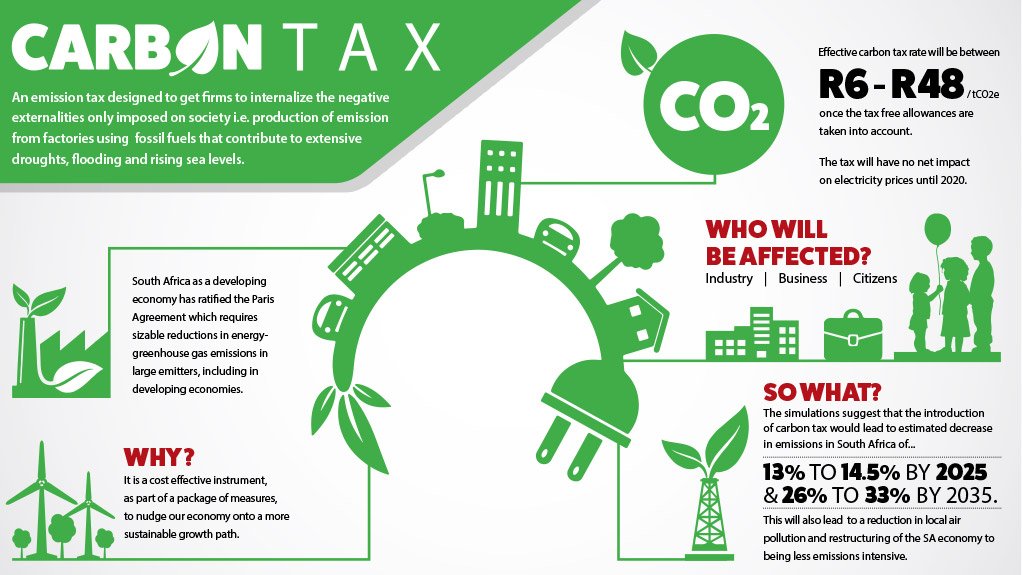 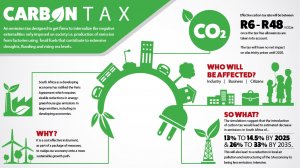 A newly published analysis of South Africa’s proposed carbon tax suggests that the intervention could have a “significant impact in reducing the country’s emissions”, while having only modest consequences for growth.

In addition, the study, titled ‘Modeling the Impact on South Africa’s Economy of Introducing a Carbon Tax, asserts that the intervention would promote a structural change in the electricity sector, by raising the competitiveness of low- or zero-emission generation sources.

The report has been produced on behalf of the National Treasury under the Partnership for Market Readiness initiative administered by the World Bank.

It comes amid ongoing opposition to the tax from certain sections of business, which argue that a R120/t carbon dioxide equivalent (CO2eq) would reduce the competitiveness of key industries and result in job losses.

Uncertainties on the economic impacts have also resulted in the National Treasury delaying the implementation of the tax from the date January 1, 2015, date originally proposed.

However, there is an intention to phase in the tax, with provisions for tax-free emissions thresholds and allowances of between 60% to 95% proposed. The National Treasury has argued that these allowances would translate to an actual carbon-tax rate of between R6/tCO2eq and R48/tCO2eq during the first phase to the end of 2020.

“This suggests that the policy would make an important contribution towards reaching the 42% reduction by 2025 target, but would need to be complemented by additional policies if this target is to be met.”

South Africa’s commitment under the Paris Climate Agreement is for its emissions to peak in 2020 to 2025, plateau for a ten-year period from 2025 to 2035, before declining.

These emissions reductions could be delivered, the study avers, while sustaining economic growth in the economy. “The carbon tax is expected to lead to a reduction in the annual average growth rate of the economy of just 0.05 to 0.15 percentage points compared to business-as-usual. In other words, instead of the economy growing at 3.5% a year, it grows at 3.3% to 3.4% a year.”

In addition, the tax would have a “small impact” on other macroeconomic aggregates such as employment, consumption and real wages.

However, the structural changes promoted through the introduction of the tax would result in “sectoral winners and losers”.

For instance, in 2035, the output from the nuclear generation, wind generation, hydro generation, other generation, gas generation and solar photovoltaic generation sectors is expected to be more than 200% greater than would have been the case without a carbon tax.

“This reflects the basic intuition that these low—and zero-carbon sources of power become much more cost competitive with a carbon tax. At the same time, coal generation becomes much less cost-competitive and, as a result, its output is 46% lower in 2035 than it would be without the tax.”

The study also foresees “substantial” declines in output in the petroleum refining, other manufacturing, coke production and the electricity supply sectors. “It should, however, be stressed that this is a relative decline in output compared with the situation in which there is no carbon tax; all of these sectors are projected to grow in absolute terms between 2014 and 2035 – by between 18% (coal generation) and 105% (other manufacturing) – even with a carbon tax.”

The report also stresses that the vast majority of sectors would be largely unaffected by the introduction of the tax.

However, the method of revenue recycling was also found to be an important driver of the results. The current design of the carbon tax includes elements of broad-based (electricity generation levy credit) and targeted support measures for low-income households.

The National Treasury says the 2015 ratification of the Paris Agreement underlines the need for South Africa to prepare to operate in a carbon-constrained economy.

“A business-as-usual scenario is no longer an option and we must take appropriate and proactive actions to help transition our economy onto a low carbon growth path as articulated in the National Development Plan.

“The carbon tax, together with the carbon offsets, is an important and cost effective instrument, as part of a package of measures, to nudge our economy onto a more sustainable growth path in a just way,” the department said in a statement released alongside the study.