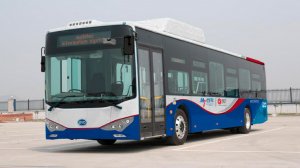 The City of Cape Town has awarded the tender for the procurement of ten electric buses and their necessary ancillary equipment for the MyCiTi service to the Chinese BYD conglomerate.

A tender for the low-floor electric buses was advertised in February and awarded in September.

BYD has supplied a number of electric buses worldwide, including 51 single-decker buses to the City of London.

Apart from lowering carbon emissions, Cape Town residents will also benefit from the contract with BYD through job opportunities, as the vehicles will be assembled locally, says city mayor Patricia de Lille.

“One of the exciting conditions of this contract is that the electric buses will be assembled locally in Blackheath and that the manufacture of the bus bodies is required to meet minimum local content and production values.

“The contractor will be employing local staff and will have to source some of the bus components from local suppliers.

“This will provide local residents with job opportunities and the chance to learn new skills as this would be the first time that electric buses are manufactured and assembled in Cape Town.”

The purpose of the contract to obtain ten electric MyCiti buses is to evaluate the benefits of electric buses as an alternative fuel option for the MyCiTi bus fleet, “which is to grow significantly over the next decade”, she adds.

Inclusive of this is determining the overall lifecycle cost – including procurement, operations and maintenance – of electric buses.

Apart from the buses, BYD is also required to provide the City of Cape Town with charging stations for the buses, data management systems, spare parts, technical support, training for the bus drivers and mechanical staff, fleet maintenance services, and replacement of the battery when required.

The tender specifies that the busses should be able to travel at least 250 km in traffic before the batteries need recharging.

“The operational cost of electric buses is reported to be significantly lower – not only in terms of fuel, but also in relation to maintenance, as there are fewer engine parts to service.

“Electric bus motors generate less heat than traditional diesel engines, there is much less noise, and it is a smoother drive for passengers and bus drivers alike.”

The city will also earn carbon credits for operating a green fleet.

“As we reduce our carbon footprint, Transport for Cape Town will earn carbon credits which the city will be able to sell on the international market through mechanisms provided to signatories of the Kyoto Protocol, as well as on local emerging markets as a result of the current South Africa Carbon Tax Act and the carbon offset regulations,” says De Lille.

Around 1 080 t/y of carbon dioxide emissions will be avoided as a result of this project.

“The potential revenue from selling the credits associated with these emission reductions will make this investment worth our while,” states De Lille.

“The value of the contract is R126-million, which includes provision for the buses, ancillary equipment, services and training, and will be partly offset by the income generated from selling our carbon credits.”

If all goes as planned, the MyCiTi service will start taking delivery of the buses in June next year.