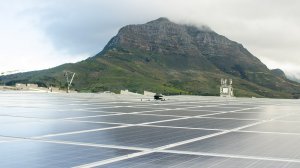 An office park in Observatory, Cape Town, has unveiled the first phase of what is currently considered to be the largest solar photovoltaic (PV) rooftop installation in Southern Africa.

Once completed, the system on the 78 000 m2 Black River Park offices will cover an area larger than a rugby field and will generate enough energy to power 1 000 average-sized houses.

SOLA Future Energy says Phase 1 of the installation on Black River Park was completed this month and is already the biggest of its kind in Southern Africa. A total of 2 875 panels have been installed, with 2 050 more to be laid in Phase 2.

Joubert Rabie, who co-owns the Black River Park with Leaf Capital, said at an event celebrating the completion of the first phase that the solar initiative was part of its strategy to “stay ahead of the sustainability curve”.

“It’s not only the right thing to do, but it also makes commercial sense,” he said, adding that the return was “substantially higher” than initially anticipated. The cost of installing the system could be recouped in the first seven years of the system’s expected life of at least 25 years.

A daily tally displayed on a computer screen outside one of the buildings, shows tenants how the system is performing. By late afternoon on Monday, the energy generated by the system equated to 934 kg of coal – or a saving of R2 229 for the day.

SOLA Future Energy is a member of the South African Photovoltaic Industry Association, which recently conducted an extensive study into the potential of PV in South Africa.

Rabie said part of the appeal of the Black River Park PV project was that it was in line with international best practice and supported companies wishing to be more ‘green’.

In terms of square metreage, international tenants make up about 35% of Black River Park. The Green Building Council of South Africa also has its offices there.

The office park also makes use of other environmental friendly initiatives, such as LED lighting, a mulch plant for its gardens and performance glass.

He said the City of Cape Town was still ironing out some technical, accounting and administrative issues, but anticipated that the complications around paying companies feeding electricity back into the grid, would be sorted out within the next three to four months.