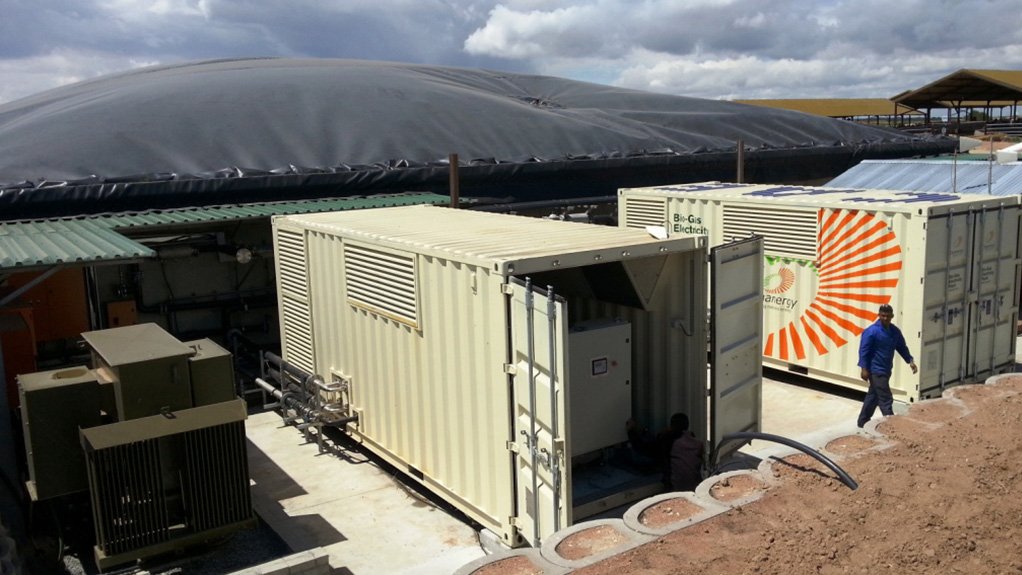 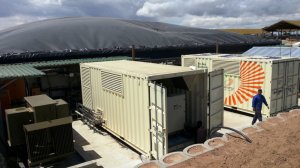 One year into operation, a pioneering 500 kVA biogas power plant at the Uilenkraal dairy farm, near Darling in the Western Cape, achieved a 1.5 GWh electricity-production milestone during August. However, Cape Advanced Engineering (CAE) MD Dr Andrew Taylor tells Engineering News Online that the plant could have produced far more had regulations been in place to enable on-farm generators to feed surplus electricity into the national grid at prices reflective of the renewable technology’s ability to dispatch power into the network over peak periods.

Commercial dairy farmers Willem and Paul Basson have backed the project since planning started in 2008 and the plant is currently meeting 95% of the electricity demand for the farm’s dairy, animal-feed milling and crop irrigation activities. As a by-product, the plant also produces high-quality biofertiliser.

The facility is able to produce more than 1 000 t/y of methane through a 7 000 m3 fully mixed, fully heated, lined lagoon biodigester, developed and built by CAE, which began life as Stellenbosch University’s engine and fuel technology centre of excellence, before being privatised in 1999.

But Taylor says average on-farm utilisation of 240 kVA falls well short of the biodigester’s gas production, which is sufficient for at least 600 kVA. In other words, about 360 kVA of potential power is currently not being realised and more than half of the biogas produced is being wasted through flaring.

“With the installation of additional generators only, the Uilenkraal biogas power generation plant is able to generate 1 MVA electricity back into the grid at periods of peak demand, for at least eight hours per day.”

Taylor describes as positive steps being taken by government’s Independent Power Producer (IPP) Office to include biogas under its cogeneration procurement programme. But the prospect for biogas investment was until recently constrained by a price cap of less than R1/kWh and “onerous” procurement documentation that is more attuned to large-scale solar and wind projects.

“One of the main barriers to development of the biogas sector in South Africa is the limitation on revenues, due to projects below 1 MW not being able to connect or sell electricity to the national grid,” Taylor explains.

However, the IPP Office is demonstrating a greater willingness to accommodate the sector, which Taylor believes has potential to produce up to 5 000 MW from plants with capacities of between 200 kW and
1 MW.

He said the Southern African Biogas Industry Association was also campaigning for biogas projects to be incentivised as “peaking” power plants, dovetailing with the solar and wind projects whose production cannot be scheduled.

There has also been movement on the price cap to around R1.47/kWh, which was far more favourable, but possibly still below the needs of many of the smaller projects.

“We are looking at the cogeneration IPP programme, but we are still concerned that there is a mismatch between the nature of biogas plants, which are small, and the onerous demands of the procurement process,” Taylor concludes.