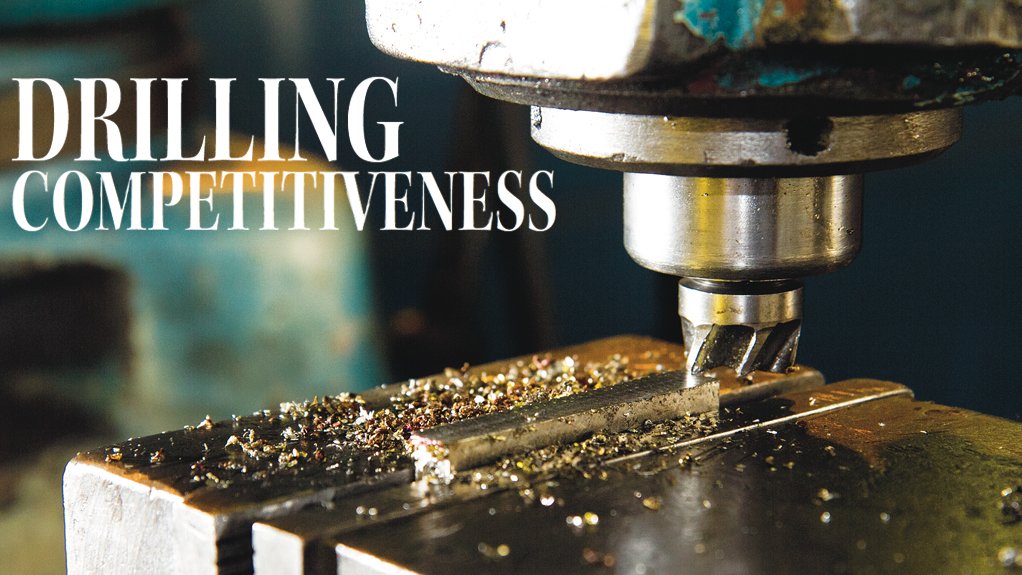 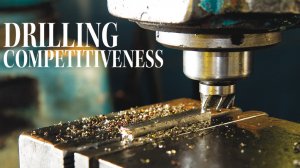 Over the past 20 years, there has been persistent concern about deindustrialisation in South Africa, as well as locally produced manufactured products having been increasingly displaced by imports.

The very future of manufacturing has been called into question, despite a series of government interventions designed to not only stem the deindustrialisation tide, but to place the manufacturing sector back on a positive growth path.

‘An Overview of the South African Economy’ report by the Industrial Development Corporation (IDC), released in 2013, showed that, while the manufacturing sector accounted for 20.9% of the country’s gross domestic product (GDP) in 1994, its contribution has since declined to around 12%.

Although the sector contributed positively throughout the period, it did not contribute positively to GDP in 2009, dragging down overall GDP growth in that recessionary year. This resulted in the manufacturing sector contributing only 0.5% to the overall growth of the country’s GDP from 1994 to 2012.

There is little question that the global economic crisis accelerated this adverse trend, particularly owing to weakened demand in traditional markets, such as Europe, as well as difficult trading conditions domestically. The fierce competition in domestic and world markets that the manufacturing sector faces has also affected the sector’s ability to grow.

The IDC report indicates that the declining trend is reflective of numerous challenges, while underscoring the need for government-supported interventions to stabilise manufacturing, whose contributions are widely recognised as being vital to sustainable growth and job creation.

Besides the demand-side stresses, the sector is also having to deal with substantial cost pressures, arising in the areas of wages, inputs and administered prices. But its competitiveness has been further undermined by other challenges, such as electricity shortages, currency volatility, skills constraints and a poor rate of productivity improvement. The volatility of the rand has also added to the malaise, with the level having also been considered too strong for sustained periods.

That said, the sector has experienced short periods of relative strength, with some subsectors having registered good growth between 2004 and 2007 as a result of robust export demand backed by solid domestic demand.

While many manufacturing subsectors are domestic-market orientated, others rely heavily on export markets. Competitiveness is, thus, critical to their success.

At subsector level, the largest gains in real value-add during the 1994 to 2012 period among the manufacturing industries were recorded for petroleum products, motor vehicles, parts and accessories, machinery and equipment, basic chemicals and electrical machinery. The food-processing sector, which currently accounts for 11.2% of the manufacturing sector’s GDP, recorded a 77.1% growth, similar to the growth of the economy in 2012.

Localisation and Exports
Department of Trade and Industry (DTI) industrial policy and strategy adviser Nimrod Zalk stated recently that there was no single contribut- ing factor that could be identified as being responsible for the decline of manufacturing in the country. Instead, the decline was a result of a range of factors that had to be dealt with collectively if the country wanted to raise the levels of diversified manufacturing and employment.

“To grow the manufacturing sector, countermeasures, such as a strong push to reclaim the domestic market through localisation, trade policy and ensuring that the country had a competitive and stable currency, need to be taken into consideration,” he stated.

In fact the DTI sees localisation, especially around the large-scale infrastructure programmes, as a key instrument of reindustrialisation.

The DTI has indicated that it aims to improve the enforcement of localisation, while acknowledging that buy-local procurement rules are currently being bypassed by government departments and State-owned companies (SoCs).

The Preferential Procurement Policy Framework Act regulations came into force on December 7, 2011, empowering the DTI to ‘designate’ the products that should be sourced locally. Already included on the list are items such as buses, uniforms, power pylons, canned vegetables, rolling stock, pharmaceuticals, furniture, set-top boxes, cables and solar water heaters.

But Manufacturing Circle Executive director Coenraad Bezuidenhout has called on government departments and SoCs to “drastically” improve their strategic procurement capacity, as well as their localisation compliance levels.

He argues that, unless this occurs, local-procurement initiatives would have little chance of stemming further reindustrialisation.

South Africa, observers argue, also needed to embark on an aggressive export drive in Africa and strive to remain globally competitive with the products it produces.

Deloitte Africa manufacturing leader Karthi Pillay broadly supported this position. However, speaking at a recent Frontier Advisory forum on manufacturing, he argued that, for manufacturing to contribute positively to the economy, companies needed to be globally competitive.

To achieve competitiveness would also require forward thinking that gave consideration to technological advancements and global trends, and not only the immediate needs of the enterprise and current demand in the economy.

Several factors – including the significant growth rates on the rest of the continent, and South Africa’s proximity to those markets – were supportive of a possible revival in fortunes of domestic manufacturing.

Government, too, is increasingly alive to the opportunity being presented by the rise of a number of African economies.

For this reason, a strong export dimension has been incorporated into the latest version of the Industrial Policy Action Plan (Ipap), while the DTI is pushing ahead with negotiations for a trilateral free trade area involving the Southern African Development Community, the East African Community and the Common Market for Eastern and Southern Africa, which is also viewed by the African Union as an important trailblazer for a larger Continental Free Trade Area.

The rest of Africa has already emerged as a ‘bright spot’ for manufacturing, with Africa having surpassed the European Union as the largest market for South African manufactured products in 2012.

“If the sector is not pushed to move into export markets and become export competitive, then there is a significant risk that the sector will peak and decline entirely within the domestic economy,” Pillay noted.

Should the manufacturing sector be export competitive, the domestic market could be used to actively develop diversified exports, which suggest that South Africa has to undergo a rapid transition from supplying the domestic market to expanding into the export market.

Alluding to this in his Budget Vote speech in July this year, Trade and Industry Minister Rob Davies pointed out that manufacturing output had remained below potential. This had led to the skewed pattern of the economy’s development, which resulted in the entrenchment of extreme levels of inequity and poverty.

The Minister indicated that the need to implement a higher-impact industrial policy became pivotal as a “response to the imminent threat of deindustrialisation” and laying the foundation for creating a stronger industrial base.

Plans in Motion
The overarching plan for dealing with the deindustrialisation threat is Ipap, which details key actions and timeframes for the implementation of the initial round of industrial policy.

Ipap sets out transversal and sector-specific programmes and action plans to retain, grow and diversify South Africa’s industrial base. It also aims to bring about structural change in the economy by focusing on value-adding activity in the production sectors, particularly labour- intensive and export-orientated sectors, led by manufacturing.

Ipap is built on the vision of the National Industrial Policy Framework, which is based on the notion of broadening participation in the economy. This government-led plan is complemented by the medium-term New Growth Path, which also emphasises the importance of a production-led growth trajectory.

Each year, the DTI launches a revised three-year rolling Ipap with a ten-year outlook in the context of rapid economic change and significant global uncertainty. The DTI believes this formula has resulted in the continual upscaling of interventions and sufficient flexibility to respond to change.

Davies noted during his speech that, through the latest Ipap report, the DTI had not only stemmed the inexorable decline of the clothing and textile sector but also witnessed significant investment and growth in the automotives industry.

Taking note of the need to employ higher- impact plans, Davies also indicated that the DTI had planned to build on and expand the infrastructure development programme to implement several mineral beneficiation projects.

The DTI also plans to pursue active development integration on the African continent and reposition South African manufacturing “in a continent that is . . . seeking to industrialise and create a platform for more granular engagements with dynamic and leading companies, based on a higher level of support against greater conditionalities,” Davies pointed out.

To achieve and consolidate these objectives, Davies indicated that new platforms would need to be built continuously to strengthen existing stakeholder engagement and deepen trust and cooperation between government, the private sector and organised labour.

The DTI will continue to support investments in the Manufacturing Competitive Enhancement Programme and the Automotive Incentive Scheme.

The department also remains convinced that efforts to grow manufacturing in South Africa remain fundamental to placing the economy on a new path of sustainable growth.

However, a major area of concern for many manufacturers remains the hostile labour climate, with the metals and engineering sectors having experienced a protracted and, at times, violent strike in July.

Indeed, while the September manufacturing Purchasing Managers Index (PMI) breached the 50-point neutrality mark for the first time since March, there is residual discontent among manu- facturers about the state of the labour market and the collective bargaining arrangements.

The Bureau for Economic Research’s political confidence index has been in decline from its peak in 2003 and Steel and Engineering Industries Federation of Southern Africa’s chief economist Henk Langenhoven warned recently that manu- facturers fear that there is an overload of mixed and negative signals around the country’s development challenges.

“Higher levels of policy coordination are needed urgently,” Langenhoven argues, adding that it is vital that government plays its part in stimulating and/or incentivising an internationally competi- tive manufacturing sector.