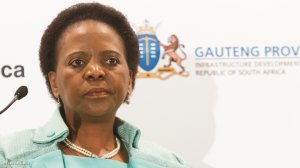 With financing being key to moving forward with Africa’s infrastructure plans, Gauteng MEC of Infrastructure Development Nandi Mayathula-Khoza was optimistic that the Brazil, Russia, India, China and South Africa, or Brics, development bank could be leveraged to roll-out projects across the continent.

The MEC told attendees at the Africa Infrastructure conference, in Sandton, that the number of investment companies, including investment banks, conventional banks and alternative funds, such as sovereign wealth and pension funds, financing Africa’s infrastructure ambitions needed to be increased to bridge the funding gap that ran into billions of dollars a year.

While it was “too early to tell”, South Africa was hopeful of obtaining support and funding for identified projects as the new Brics Development Bank reserved $150-billion for a fund aimed at achieving the key developmental initiatives of member countries.

Each year, sub-Saharan Africa only managed to raise half of the more than $93-billion a year needed to meet its infrastructure requirements.

The lack of infrastructure and future investments was hampering the continent’s competitiveness and constraining economic development – with 2% gross domestic product (GDP) growth lost each year – as well as trade and job creation.

This emerged in line with the views of Finance Minister Nhlanhla Nene, who said last week that, with South Africa’s continued economic underperformance, the sustained growth of the African continent was key to the “nation’s prosperity”.

“There are a number of projects in Africa that could unlock the growth potential of the region, but the challenges faced with converting these into bankable projects has frustrated the pace of Africa’s development agenda. The project preparation facility that will be embedded in the business of this bank will bridge the gap in addressing this challenge,” he said.