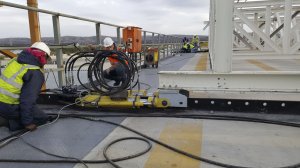 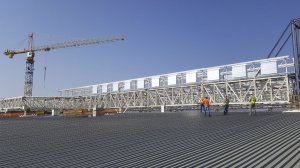 The project took place at the BMW Rosslyn assembly building, also known as Building 50 (B50).

B50 is 60 years old, and consisted of a low saw-toothed profile roof, supported by numerous columns with small spacing between them, before reconstruction began. Owing to BMW Rosslyn beginning production of the BMW X3-series model, instead of the 3-Series, the latest assembly line technology required that a 4 100 m2 portion of the current B50 structure be modified.

The proposed system, H-EMS, comprises overhead conveyors fixed to the roof, with height- adjustable hangers that carry the vehicles being assembled. The roof and column structure of the existing assembly building was inadequate for this purpose. The H-EMS system required a higher and stronger roof structure with fewer columns.

The Rosslyn plant currently only consists of one final assembly line. Owing to its compacted and congested layout, the possibility of first erecting a new building adjacent to the existing B50 and thereafter demolishing the existing B50 was not an option. Therefore, the only option was to erect a new roof structure over the existing B50, while the assembly plant remained fully operational.

When the entire roof was in its final position, the installation of roof sheeting and vertical cladding could commence. The interface between the old, lower roofs and the new, higher roofs needed to be completed along the full perimeter of the new roof before the old roof could be demolished, which took place during the December 2016/January 2017 shutdown. Access could then be handed over to the H-EMS contractor to suspend the new assembly line equipment from the new roof.

After much deliberation at BMW SA, established contractor Teichmann Structures was awarded the contract in October 2015. The company proposed two value-engineering operations to the design concept, which were adopted.

Instead of assembling the columns in sections from the ground up, the columns, which are 600 × 600 16 mm steel square hollow sections, each 12.8 m long, were fabricated as a complete unit and lifted onto the roof structure. Each column was rolled horizontally into position. Once in position above the foundations, the columns would be tilted 90º to a vertical position, and then lowered through an opening in the roof onto its foundation.

The second design concept was that the proposed working platform would be a permanent structure instead of a temporary one, with the precast concrete structure one bay westwards of the original position.

As a result, BMW today has an assembly line which conforms to their specifications, and an assembly process that is ready to begin manufacturing the new X3 series in January 2018.

The Steel Awards is a national, annual gala event, focused on celebrating the achievements of the steel construction industry. Submissions for 2018 are now open. More information can be found by contacting the Saisc.